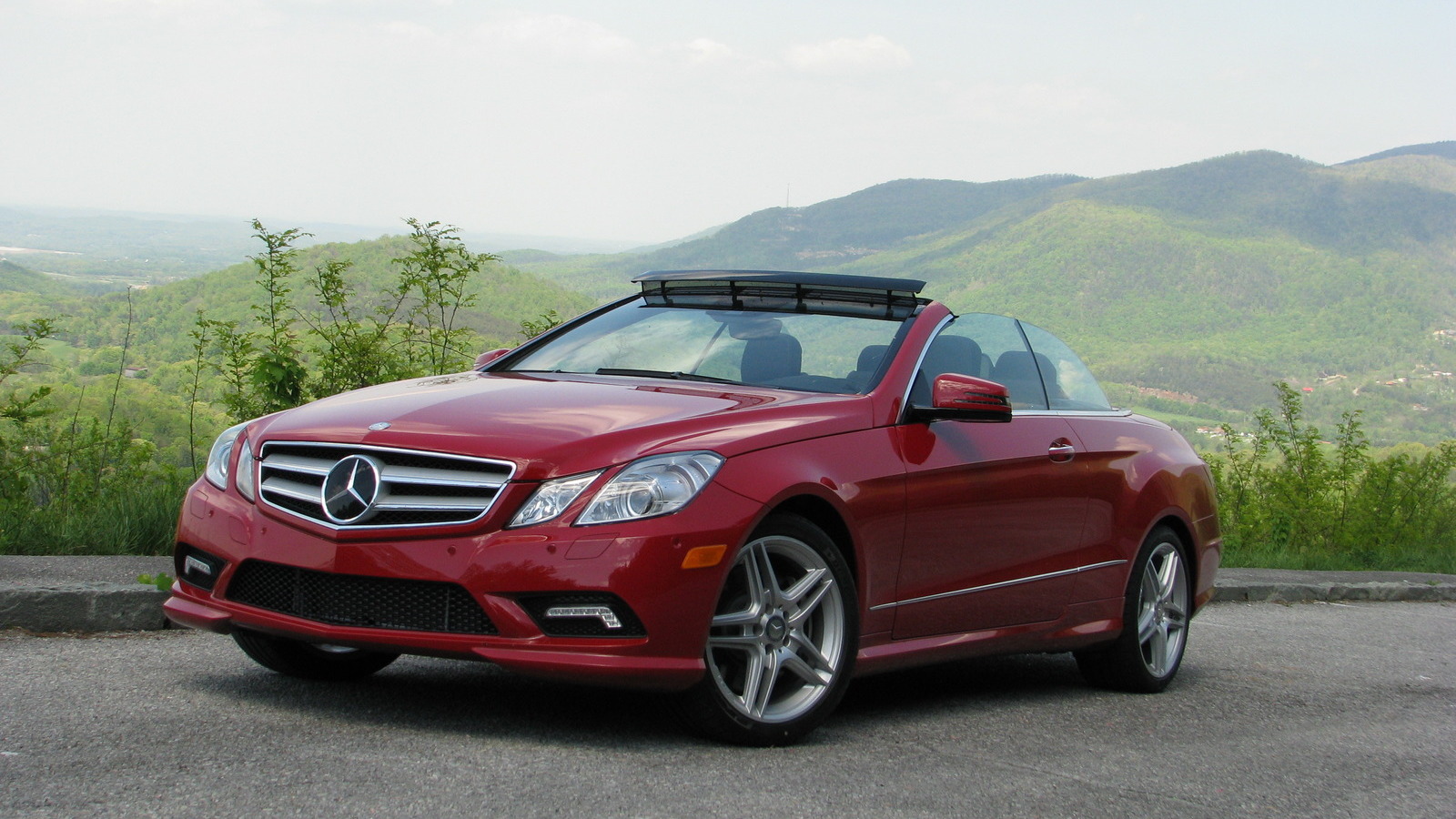 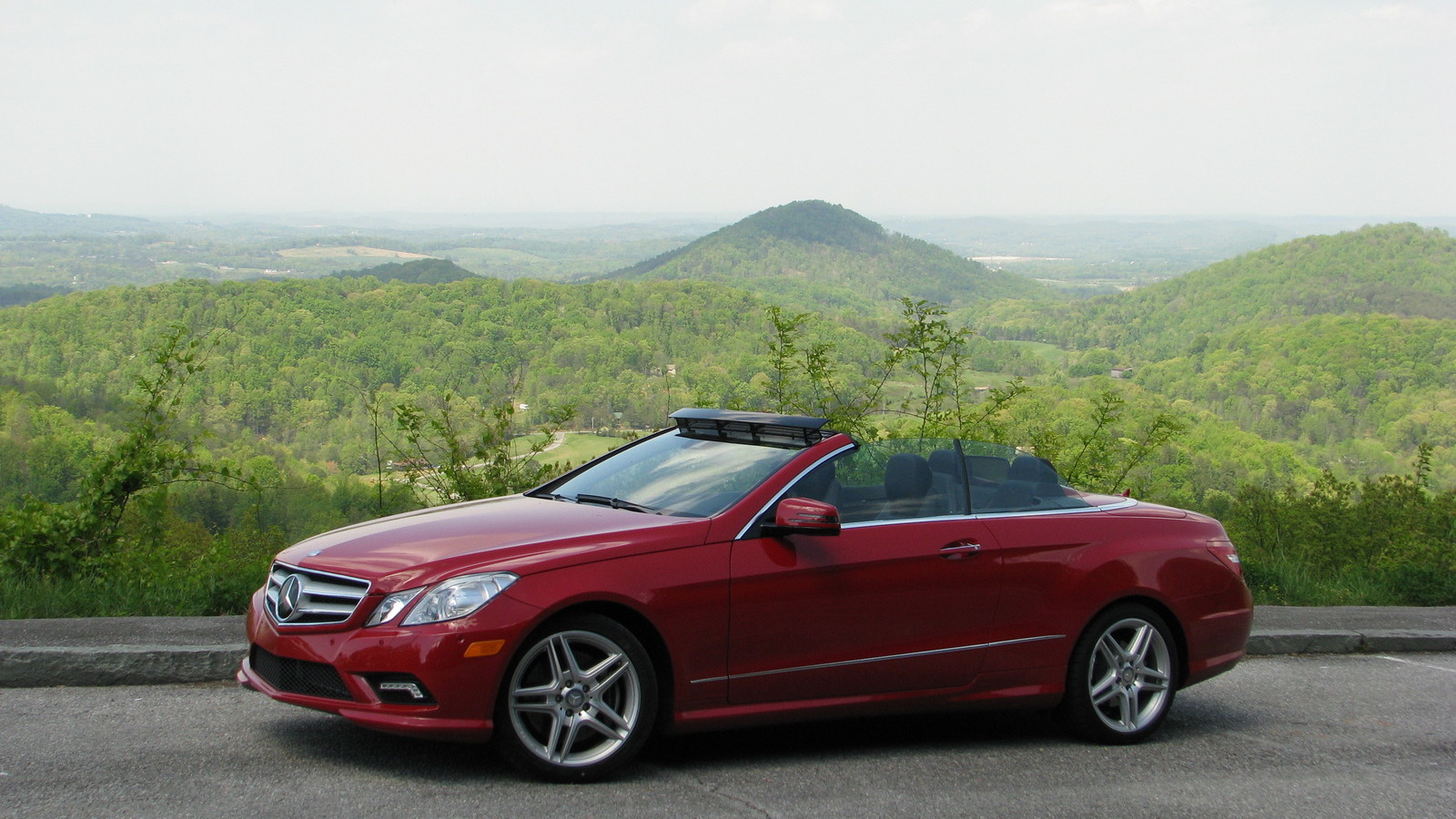 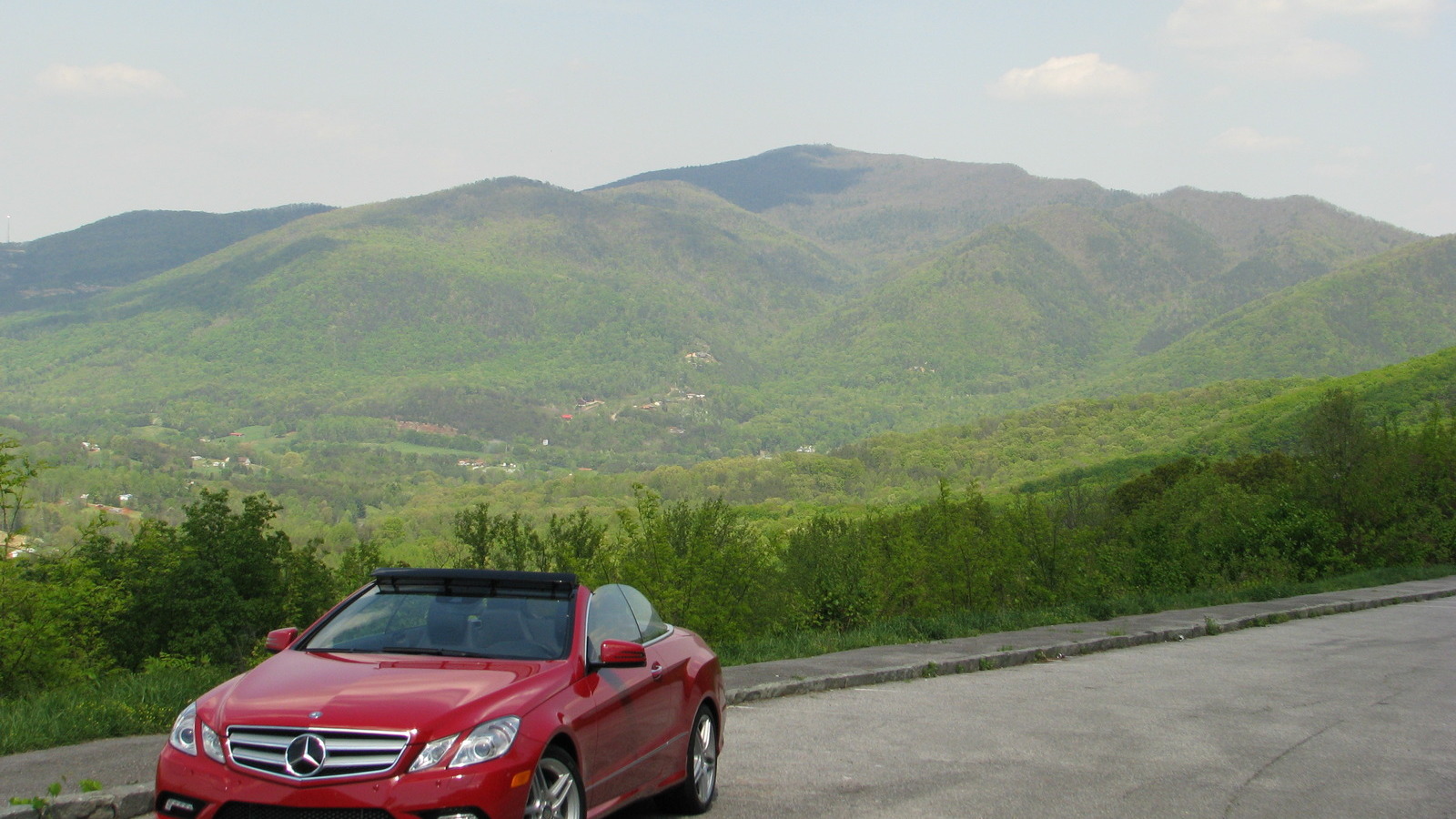 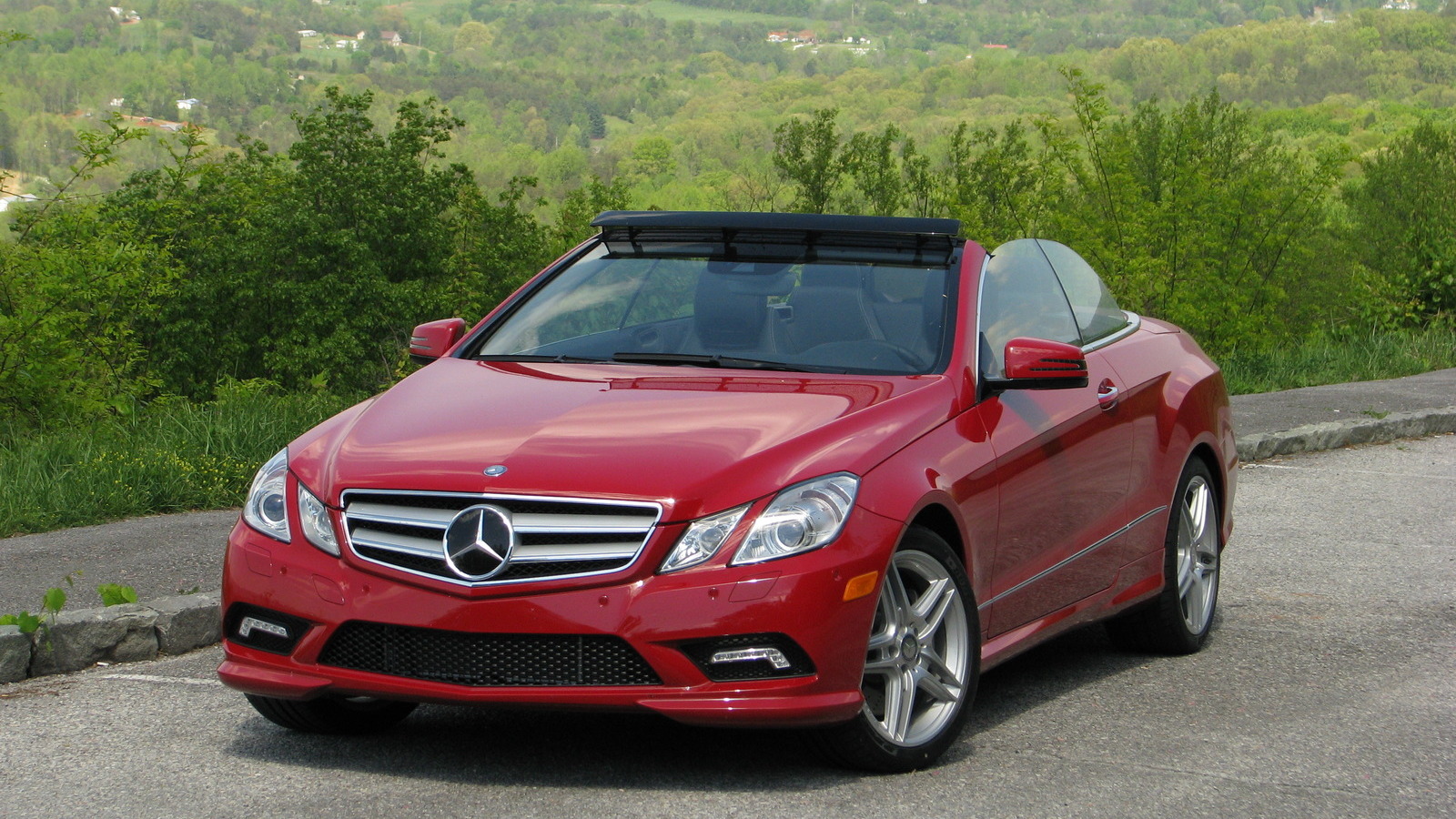 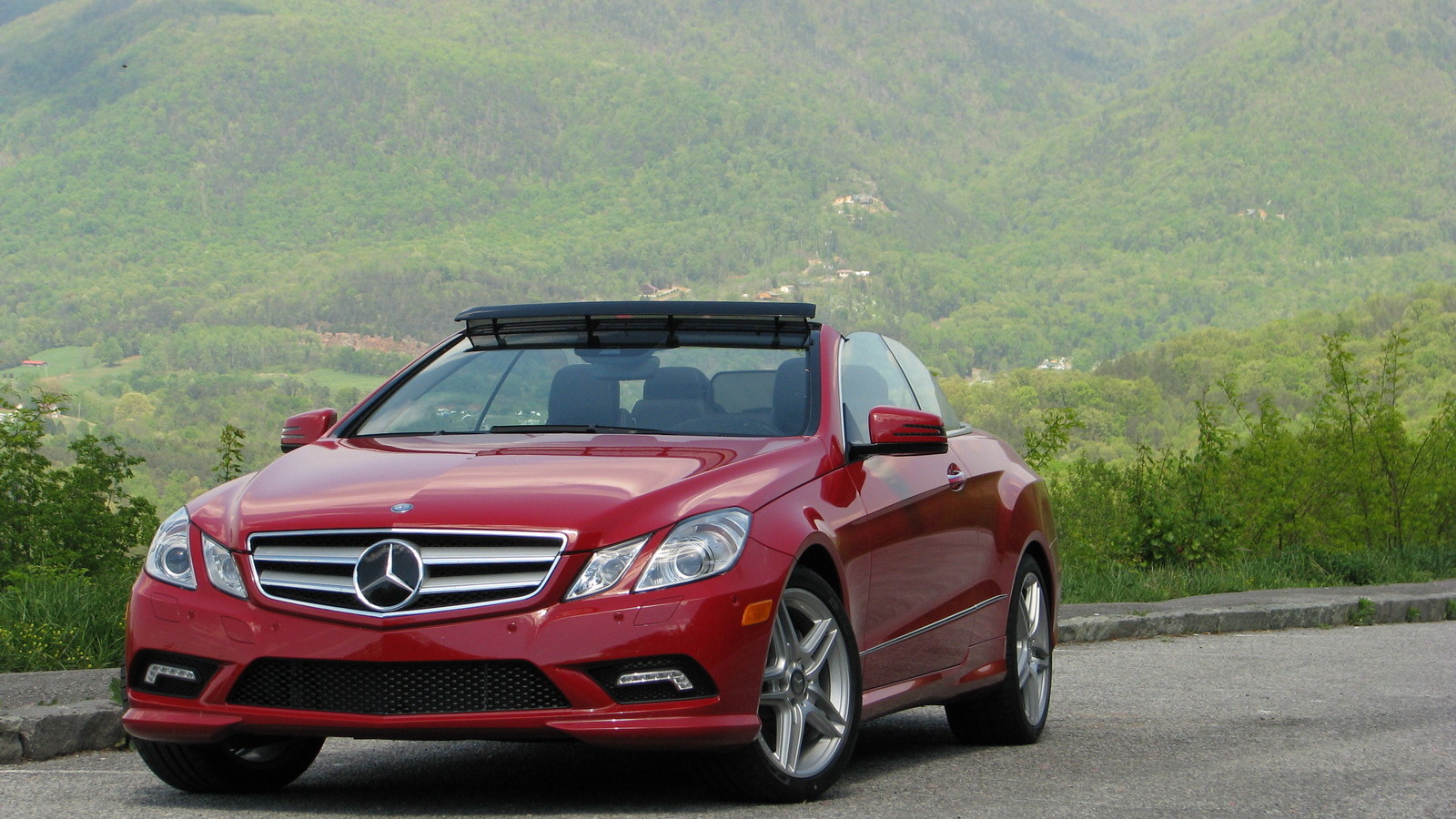 It's a beautiful spring across the country, and everywhere people are heading out for long weekend drives to enjoy their favorite stretches of blacktop the way they were meant to be--in roadsters and convertibles. But what do you do with your drop-top when those 100-plus-degree days hit, or worse still, once the sun has retreated to the inevitable onslaught of winter? Pack it in the garage and start dreaming about next spring? Not if you're a 2011 Mercedes-Benz E-Class Cabrio owner.

Disclaimer: Mercedes-Benz flew us out to the fantastic Blackberry Farm in eastern Tennessee and gave us some pretty sweet digs, access to a personal golf cart, and stuffed us to the gills with fine wine and food. Despite their best attempts to seduce us into a romantic stupor, however, we remained faithful to our mission of delivering accurate and insightful drive reports.

That's the real magic of the 2011 E-Cabrio. It's a solidly-made and smooth-cruising car, to be sure, but it's the near-four-season capacity for comfortable top-down driving that really shines. How does it manage to deliver comfort in frosty and infernal weather alike? Through the combination of two unique features: AIRCAP and AIRSCARF.


While Mercedes has a penchant for all-caps in tech names, we're going to eschew those for the sake of sanity. The Airscarf system is something you may be familiar with from other Mercedes convertibles, but the latest generation is more flexible, offering up to 36 degrees of angle in the vent, and more powerful, providing more warmth right on the back of the neck, where it ostensibly has the most impact on comfort levels. We can vouch that it works well, as we lit out from Blackberry Farm to test the car on the winding roads to Asheville, North Carolina, early on a Thursday morning with the Smoky Mountains shrouded in mist and the temps still in the lower 50s. Retract the top, flip on the Airscarf and heat radiates comfortably down your neck, much like the virtual scarf it claims to be. Neat, but what about all that wind in your face?

That's where Aircap comes in. No, it's not a virtual ball cap; it's an incredibly complex yet brilliantly simple spoiler that raises from the top of the windows frame to divert air up and over the cabin while the top is down, creating an insulated bubble over the cabin. Covered by patent and assembled out of an astonishing 211 parts, the Aircap is the homerun-hitter of the E-Cabrio's tech offensive on excessive wind. Switch it down and air dumps into the cabin, prompting passengers to pull their coats closer and hunker down against the cold. Switch it up and not only does the wind cease, but the cabin gets noticeably quieter--quiet enough to hold conversations at normal volumes, much like in a hardtop sedan. It works best at speed, though, as we noticed the influx of cool air as we slowed to a stop at the morning's first pit stop, a scenic overlook of the mountains where we topped up on coffee and nibbles.

From there, the drive route got more interesting as the windiness factor cranked up to about 8. We weren't far from the notorious Tail of the Dragon, and though it was closed for a rockslide, there's plenty of close-seconds in the neighborhood. Driving the 268-horsepower E 350, we decided to kick it over into Sport mode and see what kind of smiles the chassis and engine could deliver. A willing engine with a sweet note and the balanced ride offer just enough sport to make a fast run through the hills enjoyable, but somewhat vague steering, a large on-center dead spot and suspension clearly biased toward the cruising end of the spectrum kept us from really flogging it, or even wanting to.

This is where we segue to the 1968 Mercedes-Benz 280 SE. On loan from a museum on the west coast, the gold-painted car oozed three-pointed style and nonchalance. Hopping behind the wheel for a brief stint illustrated just how much tradition carries forward at Mercedes, not in the specifics--there's essentially no mechanical similarity between the 280 SE and the new E-Cabrio--but in the spirit. Cruising along at an unhurried 40 mph, top-down, gently rolling in the classic sprung-leather buckets, the enormous tiller in our hands, it's clear that Mercedes' four-seater convertibles have never been about outright performance or visceral feel. Instead, whether new or old, they offer an opportunity to relax, tune out the world, and motor along in serenity, with a partner or without, just enjoying the ride. What's the rush, anyway? There's all this beautiful scenery to soak in, and 360 degrees of visibility to do it. Well, almost 360 degrees, in the new E-Cabrio.

Working in conjunction with the Aircap, there's a wind blocker in the rear, situated between the rear-seat headrests, that rises up to deflect air from those relegated to the rather tight back row. While it does an admirable job at its intended purpose, between the tall rear headrests and the screen, visibility out the back isn't great with the top down--it's actually about the same as with the soft top up. It's not enough to make you uncomfortable behind the wheel, but it does require a little more attention when checking blind spots for passing or when backing up in close quarters.

After a lunch stop, we swapped over to a bright red E 550, the 382-horsepower, 5.5-liter V-8 version of the car. Equipped with paddle shifters, this version is a bit more sporting than its V-6 sister, but it's still better suited to top-down touring. But it eats up the pavement like a good Autobahner should, and in this model we noticed that even at speeds approaching 80 mph, the cabin remained free of turbulence and excessive wind noise, as long as the Aircap and side windows were up. By this point the sun and midday heat were building up, and we decided it was time to kick on the air conditioner. And that's when we found the Aircap system is as good at keeping cool air in and warm air out as it is the opposite. Kudos, Mercedes. Now if only we could find some 150+ SPF sunblock to protect our pale, office-conditioned pates from the golden sun pouring in, we'd have a car that's good for spring through fall, and even winter in all but the snowier parts of the country.

As for the rest of the car, it's what you'd expect from a Mercedes-Benz E-Class--excellent materials throughout, especially the seats and center console area. The dash has the typically German molded soft-touch rubber/plastic thing going on, and some of the lines around the nav display aren't the most elegant, but it's a minor quibble. The center stack buttons aren't entirely intuitive, mostly illustrated with minutely varying diagrams, but once you know the lay of the land, it's easy enough to use. The COMAND infotainment system is also par for the Mercedes course, though it's a notch easier to use than BMW's iDrive or Audi's MMI, primarily because it doesn't rely so heavily on nested menus. The screen and graphics aren't as beautiful as the other Germans or Ford's latest SYNC systems, for that matter, but they do the job well, only rarely washing out in direct sunlight.

Returning to the grounds of the Blackberry Farm after almost seven hours behind the wheel for a no-holds-barred seven-course, five-wine dinner and a stomping good time with an Appalachian band at the resort's Yallarhammer, we closed the experience with what every great journey deserves: a great destination.