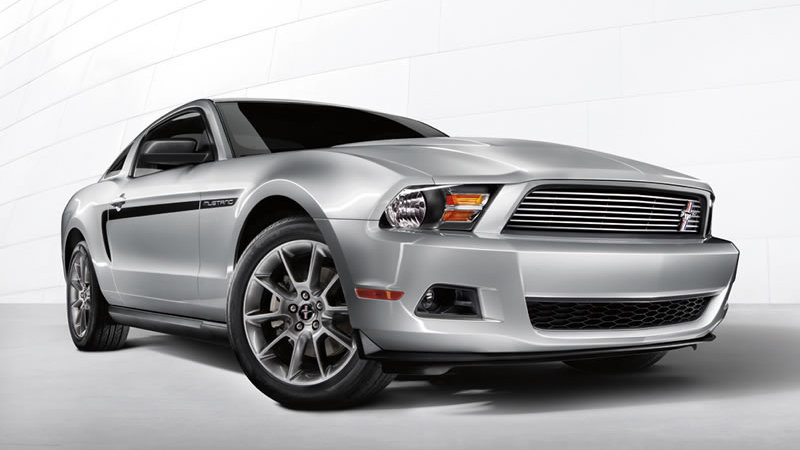 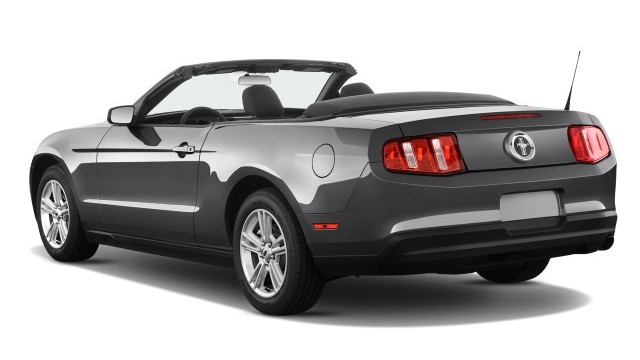 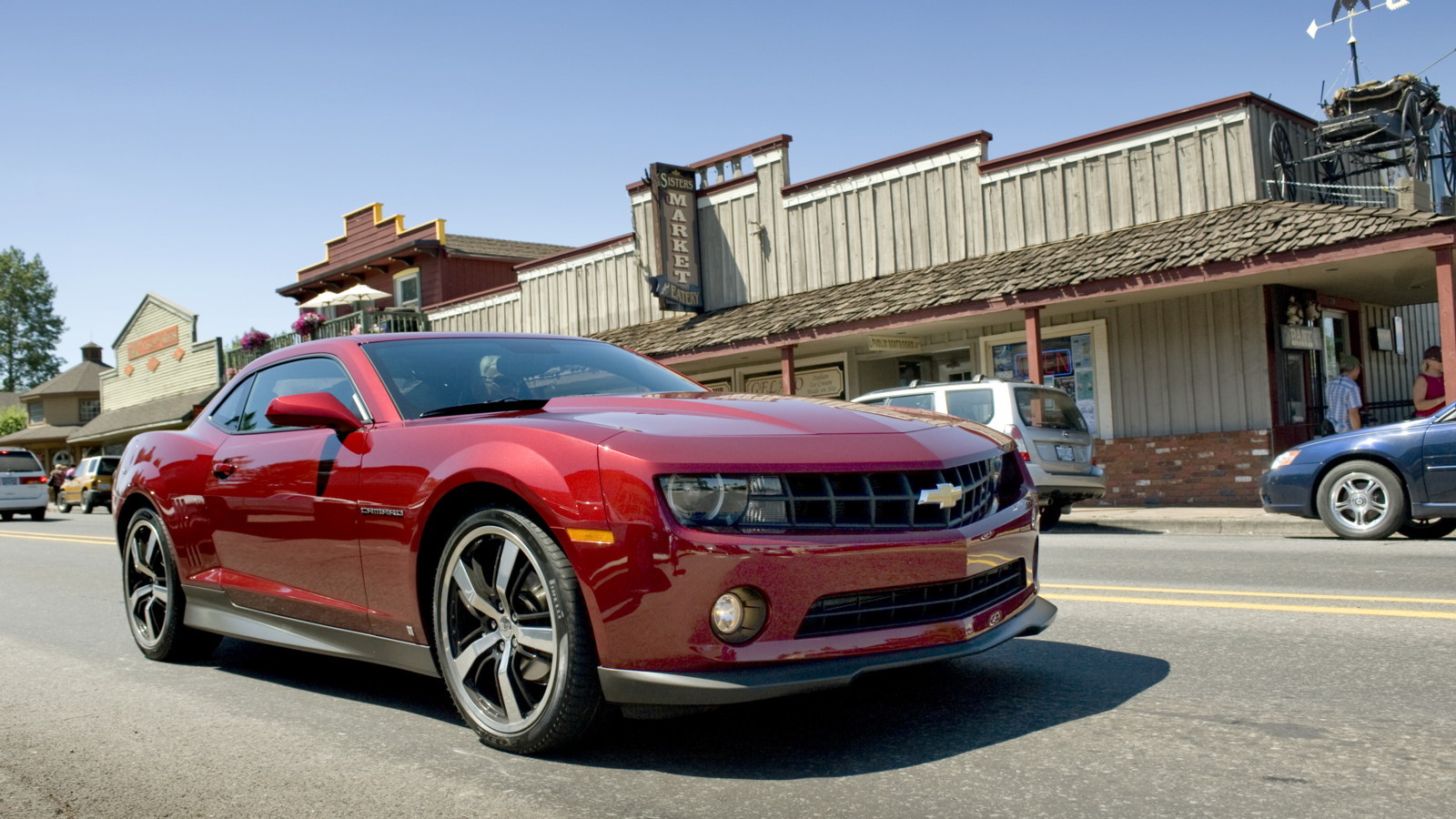 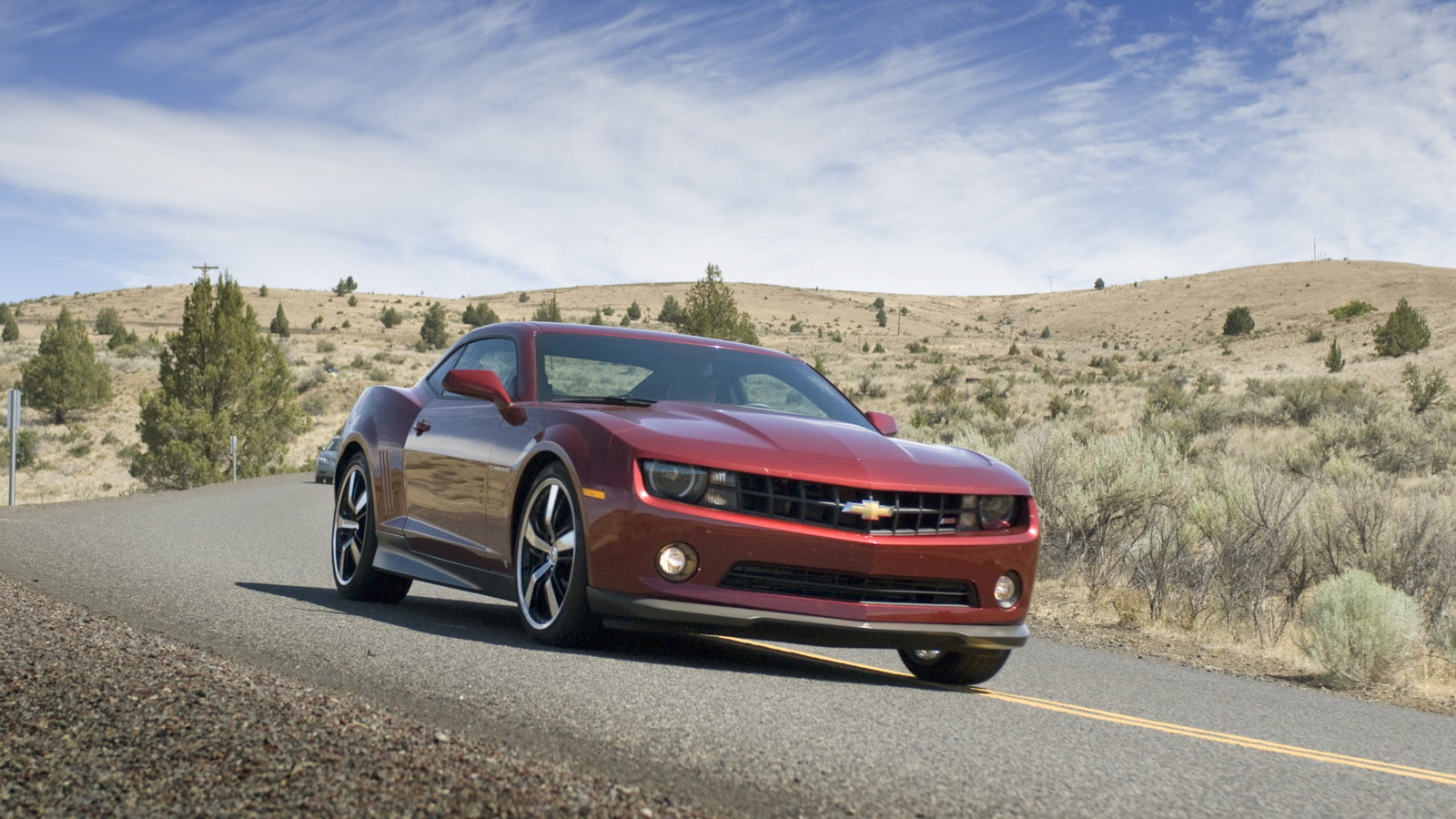 The story of the Ford Mustang and Chevrolet Camaro is one intertwined from the beginning. The Mustang came first in mid-1964, offering bang-for-the-buck performance in a sleek package. Three years later, the Camaro answered with its own take on the idea. Cut to 43 years later, and the battle rages on. Today, we take a look at the V-6 versions of today's pony cars, and see which one comes out the winner in a paper challenge royale.

To make it a fair comparison, we'll divide the competition up into four rounds essential to any pony car fan: styling, performance, comfort, and features, with extra weight given to styling and performance. Scoring will be prize-fight style, with points awarded for punches landed. First up, styling.

The look of a pony car is just as important as its bite, as many drivers want to be seen in the latest hot little domestic as much as they want to drive it. The bowtie-versus-oval battle is just a layer of this dimension of ownership.

Styled after the 1969 Camaro, and with a heavier dose of retro-modern than the Mustang, the 2010 Chevrolet Camaro cuts a bold line through traffic on any city street. The low greenhouse, aggressive fenders, and huge wheels all shout the car's identity to passersby, who are often also deafened by the loud paint schemes.

With less throwback styling while still keeping the general feel of the early cars thanks to carefully chosen accents, such as the rear window panels, the grille and headlight area, and the fastback-like silhouette, the Mustang is a more conservative choice. It's not as flamboyantly pony-tastic, and it's not ashamed of that fact, either. For 2011, the car's lines have grown sleeker, better hiding the bulk that lies just beneath the surface.

One final factor to weigh: convertibles. Top-down cruising is, for some, the epitome of pony car style, so the drop-top element can't be dismissed. The 2011 Mustang will be available as a convertible, just as the 2010 Mustang was. The 2010 Camaro is coupe-only, and the wait for the Convertible won't be complete until March, 2011, giving the Mustang a clear advantage.

Verdict: It would have been a tie, but the convertible factor tips things in favor of the Mustang. Both cars look great in the flesh, though they do so in remarkably different ways. Round 1 score: 10-9 for the Mustang.

Getting up and going is also what pony cars are about, but since we're looking at the V-6 models, we've already decided we don't need the brutal power supplied by either model's beefy eight-pots. Instead, we're looking for a balance between everyday behavior and weekend (or weeknight) enthusiasm.

If this comparison were held just a year ago, the Camaro would have run away with the show--the 304-horsepower, 3.6-liter V-6 in the new 'Maro is head and shoulders above the previous 4.0-liter, 206-horsepower V-6 of the Mustang. But we're looking at the new 3.7-liter Duratec V-6 in the 2011 Mustang, and things are much, much tighter.

Rated at 305 horsepower, the new Mustang V-6 is the first 300+ horsepower car to rate over 30 mpg highway with the EPA. That's a fact GM's been crowing about, though the Camaro is right on its heels at 29 mpg highway. So far, the Mustang has the slight edge, but it's very slight.

Weight is a prime factor in pony car performance, too--especially since we don't have the forgiving torque of a big V-8 to make up for porky poundage. Things are tight here, too, with the 2011 Mustang V-6 estimated at an even 3,750 pounds at the curb, and the 2010 Camaro V-6 checking in at about 3,770 depending on trim. Twenty pounds is about a half a percent, so again, the Ford holds a razor-thin margin on the Chevy.

Something not typically a major concern for the pony car enthusiast is handling--after all, there are true sports cars available for similar money. But the 2010 Camaro has upped the ante with four-wheel independent suspension, while the 2011 Mustang continues to make do with a solid axle rear end.

When it comes to turning corners, or just sorting out broken pavement, the lack of rear-end skitter provided by the more advanced gear on the Camaro give it the edge on stability and traction. On the flip side, the Mustang's solid axle layout is less prone to wheel hop on hard drag-style launches, so for the pony car possessor with straight-strip aspirations, the Mustang is actually the better choice. Once again, things on both sides look to balance out, leaving only the vagaries of personal preference to sort the differences--but since these are the V-6 versions, we're going to discount the Mustang's drag-strip advantage, giving the nod to the Camaro for everyday ease of use, and the occasional corner-carving commute.

Verdict: A close round, with the Camaro's more advanced rear end landing a solid one at the bell. Round 2 score: 10-8, Camaro.

Whether cruising the boulevard on Saturday night or stuck in traffic on a Monday morning, pony cars have always been about comfort. Getting from point A to point B can't include a jarring ride or an assault on the senses for the more mainstream small-engine cars.

This is an area where both Camaro and Mustang have made great strides, equaling the best midsize sedans for front-seat room and ease of access to controls. The back seats of both are another story, but these are really two-plus-twos, not true four-seaters, so some concessions to comfort are expected.

One primary concern for comfort behind the wheel, however, is visibility. This is no problem for the Mustang, with a big windshield, ample side and rear glass making it a breeze to spot that car just off your rear quarter panel in the next lane. The Camaro fares worse, as its low greenhouse means just a sliver of windshield over the dash and prominent hood, and even less rearward visibility thanks to those thick, stylish rear pillars. While it's no easy trick judging distance when parking either thanks to long noses and domed hoods, the Mustang is the clear winner when it comes to navigating the morass of morning traffic.

Verdict: The Mustang wins, with the Camaro's vision blurred. Round 3 score: 5-4 Mustang.

This is a category that was essentially irrelevant--even non-existent--in the original pony cars. A/C, heat and AM/FM radio were the primary amenities. Things have changed, however, and any modern image car has to offer a bumping stereo, digital media access, phone integration and more to hang with the pack.

Both the Mustang and the Camaro can be loaded up with more features than your average mid-1980s luxury sedan. The Camaro even offers rear parking assist to help overcome its lack of visibility. The 2011 Mustang's full specs haven't been revealed yet, but the 2010 model's options are sure to carry over for the most part, so we can interpolate for the sake of comparison.

This being the second decade of the 21st century, people want to hear buzzwords like "connectivity," "infotainment," and "multimedia" when they're shopping for their prized daily driver, and the pony car segment is no exception. To feed this need, Chevrolet offers an available Boston Acoustics 9-speaker audio system, XM Radio upgrade, Bluetooth phone capability, OnStar telematics, remote vehicle start, and a huge array of interior appearance upgrades.

The 2011 Mustang, assuming it inherits its 2010 feature sheet with a little modernization, offers a near-identical list of options, including a reverse camera system that helps avoid obstacles that would be unseen from the driver's seat. The available SYNC infotainment system also boosts the Mustang past the Camaro, as Motor Authority's experience with the SYNC system put it on par with any computerized entertainment/media/vehicle interface in the industry, and ahead of most. SYNC provides Bluetooth phone connection, excellent navigation, MP3 media player access, voice commands, plus traffic and weather.

While the Camaro offers most of the features found on the Mustang, Ford's fantastic SYNC system is enough to tip the scales even if the 'Stang comes up short in other areas. It's really that good.

Verdict: A closely fought round, but the Mustang wins, 5-4.

Final score: 2010 Chevrolet Camaro: 27, 2011 Ford Mustang: 28. The closeness in the score reflects the closeness on paper. But as with any car, the paper only tells half the story. To win a prize fight, you can't just edge out the belt holder--you have to beat them soundly. Accordingly, we'll have to wait to see how the 2011 Mustang's V-6 sings to determine if the new engine helps dethrone the Camaro as reigning champ of the six-pot pony cars--but it's looking good for the new Ford.