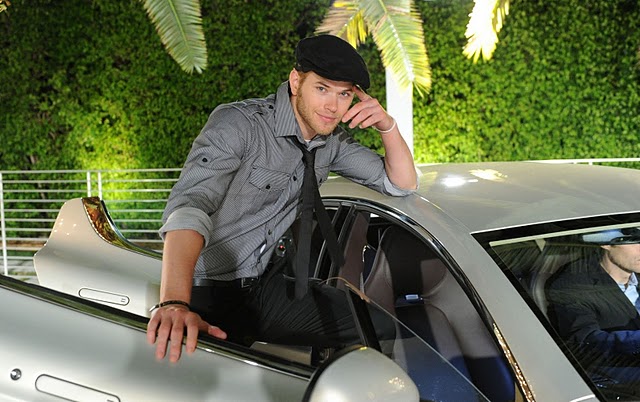 So there was this party at the home of Michael Bay. You know, the guy who directed the classic Playboy Video Centerfold: Kerri Kendall (and those Transformers movies too, we suppose)? The same Michael Bay who cleverly disguised his casting couch as a car wash? Him.

Anyway, there was a party at Bay's house in Miami Beach over the weekend. Despite the fact that Bay seems like the type of guy who'd probably throw a blowout Superbowl bash, complete with butlers, cigars, and strippers, this had nothing to do with the Big Game. Instead, the event was hosted by the Giving Back Fund, "a national public charity established in 1997 that seeks to cultivate and nurture a new group of philanthropists within the sports, entertainment, and business communities and to help establish role models who will inspire others to give back." So basically, it's a charity that encourages others to encourage charity. Sounds like a nonprofit version of Albania.

And what the hell does this have to do with cars? We're not entirely sure, but we got a release from Aston Martin saying that the 2010 Aston Martin Rapide would be central to the event. So far, all we've been able to turn up is this photo of Twilighter Kellan Lutz posing all jaunty-like in the door of said Rapide. There is also a photo of Karina Smirnoff, posing awkwardly behind the wheel of an Aston Martin DBS, but we think KLutz's pic is funnier.

So in sum: there was party at some creep's house for B/C-listers to encourage giving, but also spending on high-ticket items like the Rapide. And dotted throughout the event were "experiential vignettes" by "Spanx for Men". On Superbowl weekend.

Three words to the Giving Back Fund: FOCUS, PEOPLE. FOCUS.

*Interview and photo opportunities during arrivals only

ABOUT THE GIVING BACK FUND:

The Giving Back Fund (GBF) is a national public charity established in 1997 that seeks to cultivate and nurture a new group of philanthropists within the sports, entertainment, and business communities and to help establish role models who will inspire others to give back. In pursuit of this mission, The Giving Back Fund has provided philanthropic consulting, management and programs to more than 100 athletes, entertainers, entrepreneurs, and other high net worth individuals who are focused on increasing the impact of their philanthropy. To date, The Giving Back Fund has overseen the distribution of over $20,000,000 of charitable grants within the United States and other countries, and has developed dozens of unique scholarship, mentoring, performing arts camps, and other types of philanthropic programs.