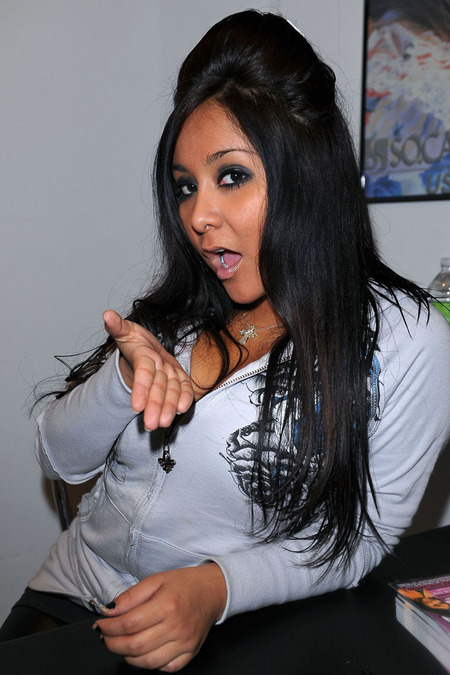 So here's the deal: everyone's least favorite pudgy munchkin (not to be confused with Tila Tequila, who is many things, but not pudgy) somehow landed an appearance at a used car dealership in Easton, Pennsylvania over the weekend. Yes, Nicole “Snooki” Polizzi was stationed at Star’s Pre-Owned Center, where she signed autographs for her fan(s) and posed for photo-ops. But as if the thought of another famewhore mugging for the camera weren't stomach-churning enough, the girl did it in the name of disaster relief for Haiti.

Now look: we have nothing against celebrity causes, and we strongly believe that focusing attention on Haiti is very, very important. (If you have the resources, please consider using the disaster relief banner above to make a donation to the American Red Cross.) But you have to admit that hosting a terrible, Z-list personality at a used car lot seems low-rent at best, which ultimately cheapens the event and makes people question the charitable intentions of the organizers.

But you know what? We're not here to question intentions. We only know what we know, and what we know is that one of three things has happened:

1) The owner of a certain car dealership in Easton, Pennsylvania has completely lost his/her mind;

2) Snookie has scammed said owner into believing that she is a "wildly popular reality TV star" with a "busy travel schedule";

3) Or someone (looking at you, Katy Perry) has shredded the space-time continuum and landed us in the middle of an alternate universe where every day is backwards day.

According to Star Car Sales Manager Eric Watson, “The dealership will donate $100 per every car sold on Saturday to provide much needed supplies and relief to the people in Haiti.  We are thrilled to have ‘Snooki’ visiting the dealership to raise awareness for the cause and attract new buyers so we can offer more aid to the Haitian people”.

Nicole “Snooki” Polizzi gained national attention this year as America’s favorite “Guidette,” thanks to her outspoken demeanor and wild escapades at the New Jersey Shore.   Her reality TV show continues to bring in massive ratings and viewership, despite losing major sponsors such as Domino’s and Dell, who considered the show “outrageous” and “offensive” to Italian Americans.

“Love her or hate her, Snooki has become a national phenomenon and we are so thrilled she’s taking time from her busy travel schedule to visit our Lehigh Valley auto dealership.  She’s helping us go above and beyond for a great cause and we look forward to writing a large check towards Haitian relief efforts on  Saturday,” says Eric.

Star Car Pre-Owned Center  is located at 260 Country Club Road, Easton, PA 18045.  The dealership prides itself as having one of the Lehigh Valley’s largest variety of quality and certified pre-owned vehicles.