Spend an hour or two behind the wheel of a Tesla Roadster, and you may walk away thinking that pistons, gasoline engines, clutches, gearboxes, and the many other mechanical bits of a standard sports car are just so...last century.

Now you too can experience the rush of pure electric power from the driver's seat of a 2010 Tesla Roadster Sport. That's the model whose tweaked software and hotter electric motor slingshot it from 0 to 60 mph in a mere 3.7 seconds.

It's quick enough that you'll pity most Porsches and Ferraris, smiling indulgently at their slow, stodgy, sluglike acceleration, just before they recede in your rear-view mirror after a near-silent surge of all-electric power.

All you have to do is win our writing contest. Your goal: Submit the single best article we see, as judged by our editorial team.

In January, we'll fly the winner to San Francisco to interview Tesla staff, followed by a test drive in the 2010 Roadster Sport along with executive editor Marty Padgett.

Now, just a few more words on our prize.

It's the addictive allure of that single, smooth, seamless rush of torque that makes many reviewers compare the Tesla driving experience to an addiction. We sure wanted to do it again and again and again--as soon as possible, right now, this minute, please!--when we tested the 2009 Tesla Roadster.

You'll find that you'll need to reprogram some of the old, dated driving habits  you've held over from gasoline cars. You'll learn to drive it on a single pedal, using the regenerative braking just like more aggressive engine braking, and using the Brembos only at 3 mph or less.

To give you a little mental image, the photo below shows your faithful correspondent behind the wheel of that 2009 Tesla Roadster, after a series of slightly speedy runs along the San Francisco Peninsula's scenic Skyline Drive. Note the maniacal grin.

Click and enter. Do it now. Before it's too late (the contest ends December 31). Haul out those quill pens and iPhones, and start composing.

More information on our Tesla test-drive contest are available by clicking on our "Write For Us" page. You can enter as often as you like. 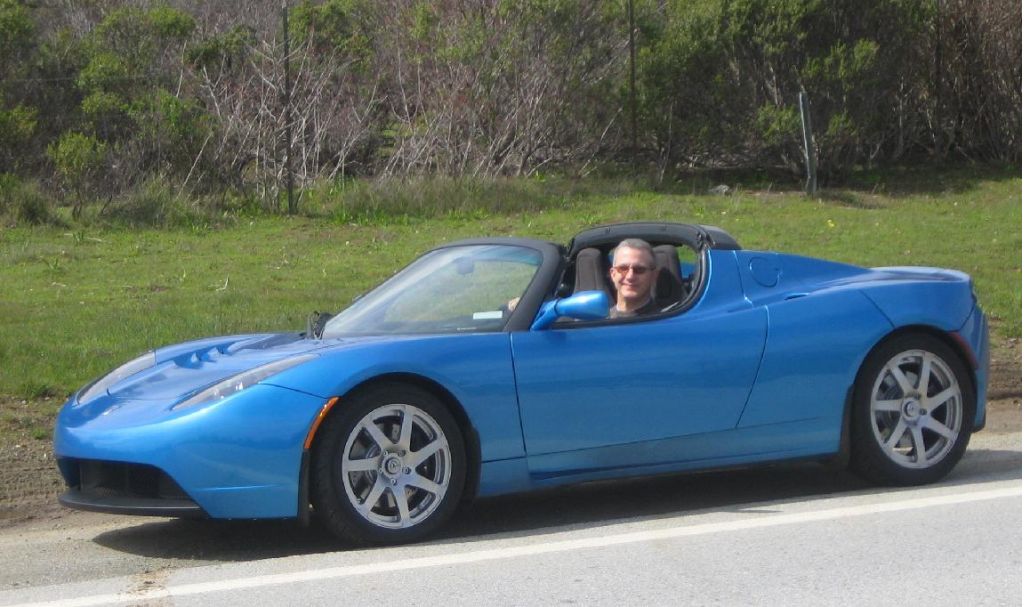