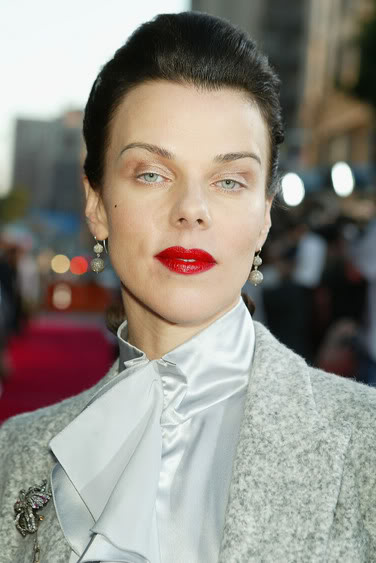 Can we just say how stoked we are to see Debi Mazar making the rounds again? She was three kinds of awesome in the 80s and 90s -- everybody's favorite badass girlfriend. She was the Thinking Man's Juliette Lewis, if Juliette Lewis bathed more and, you know, wasn't crazy. Like, seriously: we're not entirely sure she was even acting in Natural Born Killers or Romeo Is Bleeding or 9/10ths of the rest of her resume. Of course, what do you expect from someone who's married to a professional skateboarder? Not that Debi isn't a little out there, too, of course....

Based on this photo, we are equally happy to see that Debi has been bathing in the blood of virgins and therefore looks as smokin' as ever -- and just as importantly for auto hounds, she keeps a very clean car. (Although that looks suspiciously like a St. Christopher's medal dangling from the rearview mirror, which seems like pointless car clutter since Chris' canonization was revoked years ago, meaning that he's no longer the patron saint of drivers. Sorry, Debs. You're on your own. Use The Force.)

That said, we're a little stumped by what Debi's driving. The interior is clearly sleek and stylish, with power everything and leather everywhere (as if Ms. Mazar would have it any other way). And while something about the design looks vaguely American, at least one person on staff desperately wants to be a Maserati. We can't zoom in enough on the steering wheel to confirm the logo, so we're left with a mystery as profound as the woman herself: What Would Debi Drive?