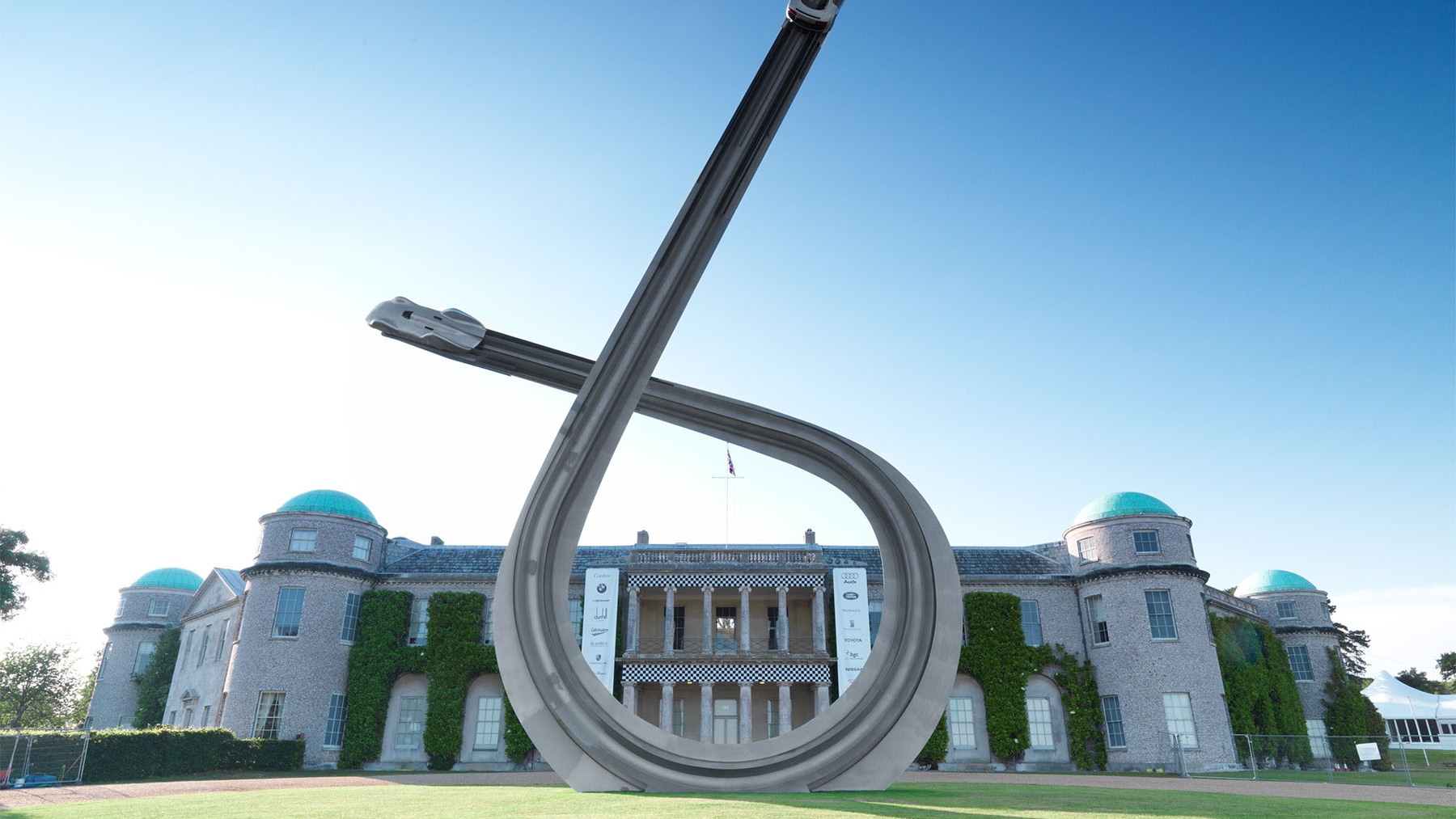 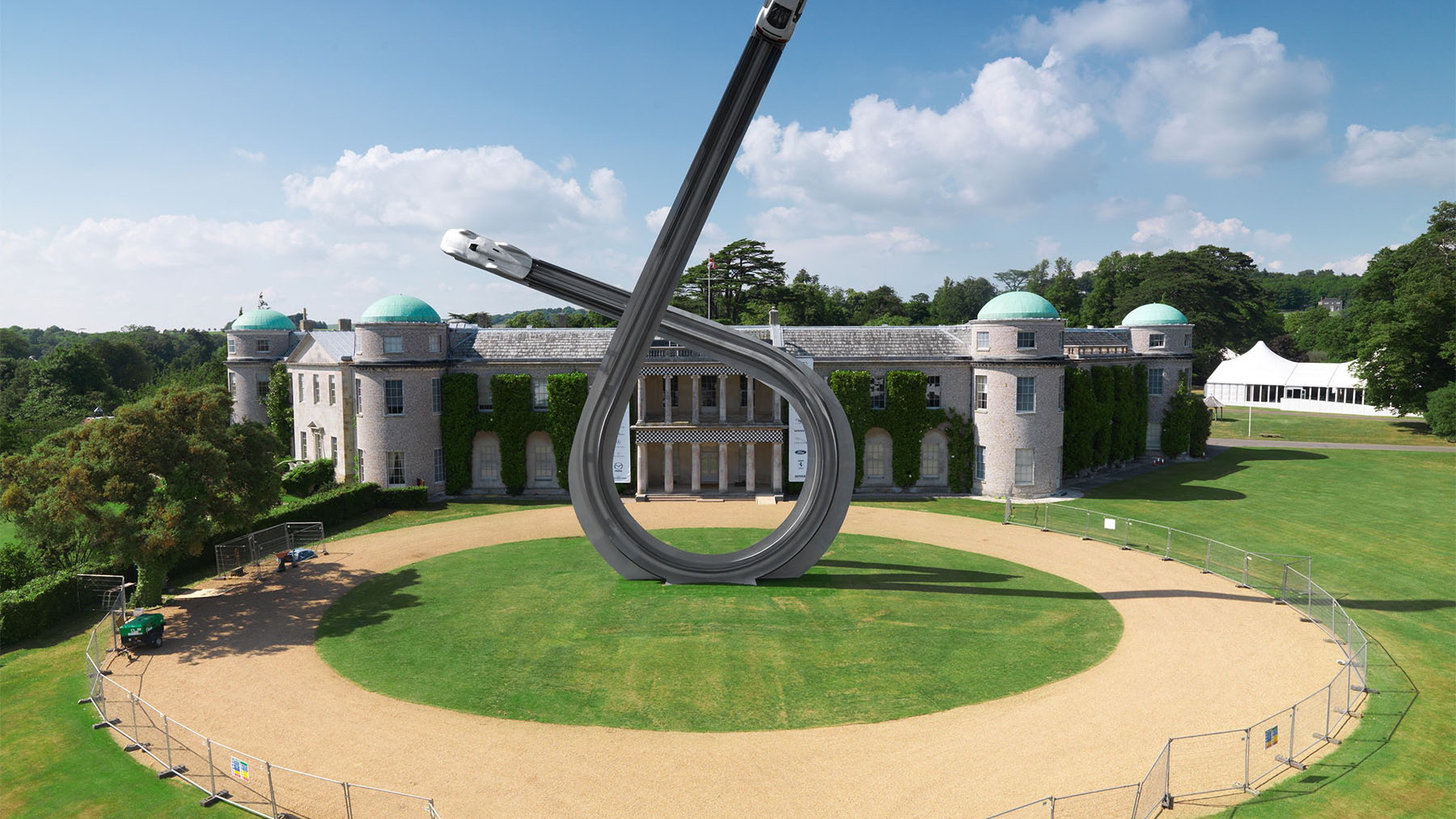 2
photos
Centennial celebrations have been a common occurrence of late as the industry as a whole begins to push past the 100-year mark. This year marks Audi's 100th, and it's celebrating at the Goodwood Festival of Speed, in part with the 115ft (35m) 2009 Festival of Speed Central Feature (pictured).

This isn't the first time Audi has celebrated a major milestone at Goodwood, but it is the largest center piece to date.

Designed by the award-winning Gerry Judah, Lord March’s evergreen creative collaborator, the sculpture features two Audi cars – the legendary 1937 Auto Union streamliner as well as the just launched R8 V10 sports car suspended in the air, at either end of a dramatic ‘swoosh’ of tyre tracks, as if they are driving off into the sky.

The sculpture is the latest in a tradition of central displays at the Festival. Each year Judah honors the featured marque with its own central display but this year’s is something special. “I wanted to design something iconic because this year is Audi’s 100th anniversary,” explains Judah. “The sculpture had to have a celebratory theme and it also had to encompass the qualities of the Audi brand: sporty, prestigious and progressive.

“I drew about 20 ideas and some had elaborate bridges with vaulted arches but somehow they didn’t have quite the right style. I then had a flash of inspiration and designed this ‘swoosh’ with a car at either end to represent Audi’s 100-year history."

As well as the Audi sculpture, the Festival will showcase Audi’s most important cars and drivers from its illustrious century – from the days of the Grand Prix Auto Union ‘Silver Arrows’ of the thirties, through the ‘quattro years’ of the Eighties, right up to the present day. A brief timeline below documents what Audi thinks are some of its seminal moments over the past 100 years.


1909 - First car to bear the Audi name: the Audi Type A (2.6 liter)
1935 - The Auto Union B-type wins the Italian Grand Prix at Monza
1937 - The Type C Stromlinenwagen first to break the 400 kph land speed record on the Autobahn
1938 - First to perform systematic crash tests bringing added safety and reassurance for drivers
1980 - First to introduce a permanent four-wheel drive rally car – the Audi Quattro with its turbocharged five-cylinder engine
1989 - First Audi with TDI – the Audi 100 shows the world the remarkable power and economy with TDI
1994 - First to use the Aluminum Space Frame – tough and corrosion resistant, this provided the bodyshell for the Audi A8, making it far lighter than traditional designs
2006 - First to win Le Mans with a diesel-powered car
2009 - First appearance of the Audi R8 V10 – the new 10-cylinder performance car which is capable of 0-62 mph in just 3.9 seconds