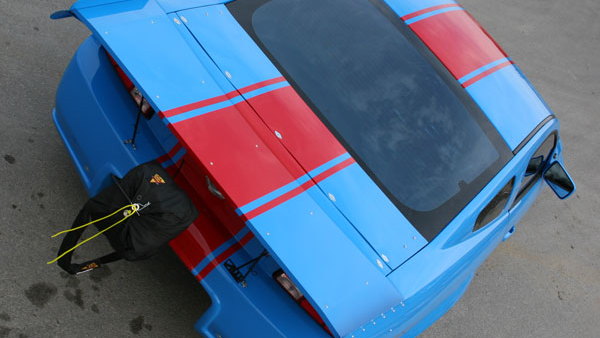 The team are using a S197 Ford Mustang Super Shelby GT500 as their donor car and hope to build it into a drag monster in time for the next NMRA drag meet in Bradenton, Florida, early next month. Evolution Performance can already lay claim to the title of building the first 2007 Shelby GT500 capable of an eight-second quarter mile but as always the team are trying to push the limits of the Mustang platform.

The key to the fast numbers is a custom twin-turbo package for the GT500’s V8 powerplant. Evolution Performance’s new car will feature an all aluminum motor with CNC machined heads, custom turbocharger cams, two precision double ball bearing turbochargers and a host of other custom pieces. No dyno testing has been conducted but estimates pit the output of the new package at around the 1,000hp (746kW) mark.

While big horsepower Mustangs are nothing new, what’s interesting is that the Evolution Performance drag package will be fully road-legal. The only changes needed for the street are set of 20in wheels and road-legal tires.

This teaser shot shots off the look of the new car that will debut next month in Bradenton. The vehicle is finished in a ‘Grabber Blue’ paint scheme and features a three lane stripe running its length.