';
For its 2007 model year, Bentley has endowed its range-topper Anarge T with a revised 6.75-litre twin-turbo V8. The new mill develops a very healthy 500bhp (373kW) and 1000Nm of torque. Lesser models, including the R and RL make do with 450bhp (336kW) and 875Nm of torque. This is pushed through a ZF six-speed auto, similar to the gearboxes used by Aston Martin and BMW.

Visual changes include subtle modifications to both the interior and exterior, which include new wheels, colors and trim. Sale of the new car will start next month.

- Improved driver ergonomics thanks to 25mm increase in length of steering column and in vertical steering wheel adjustment.

Click here for high-res images and the official press release. 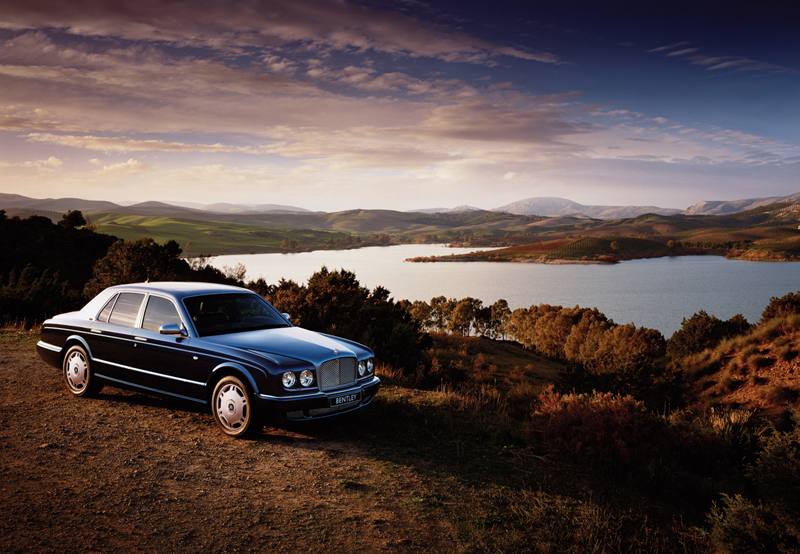 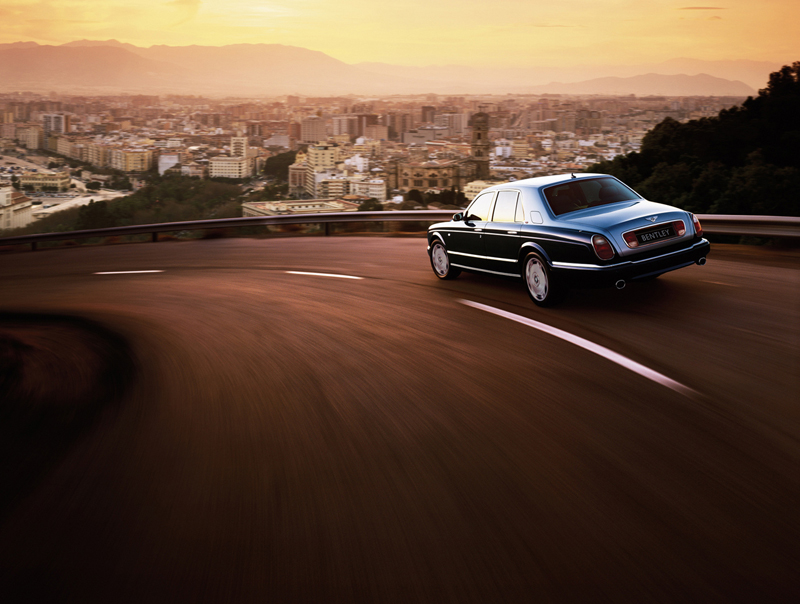 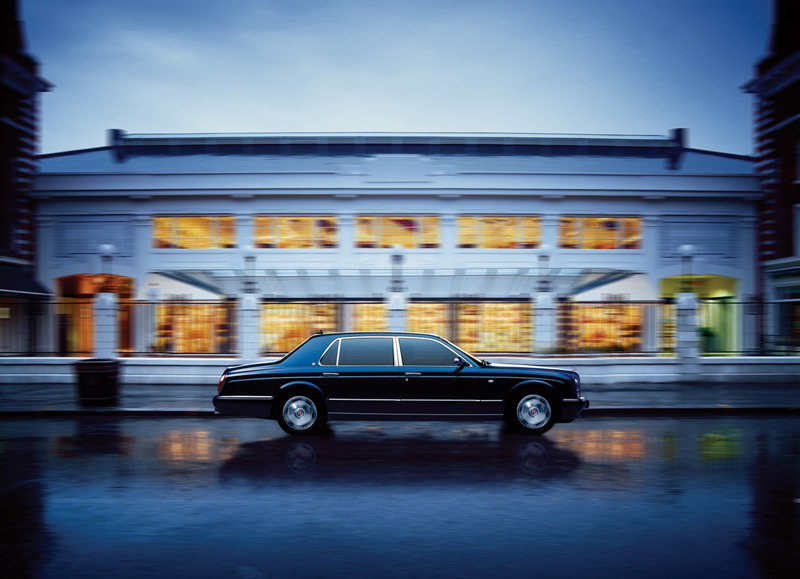 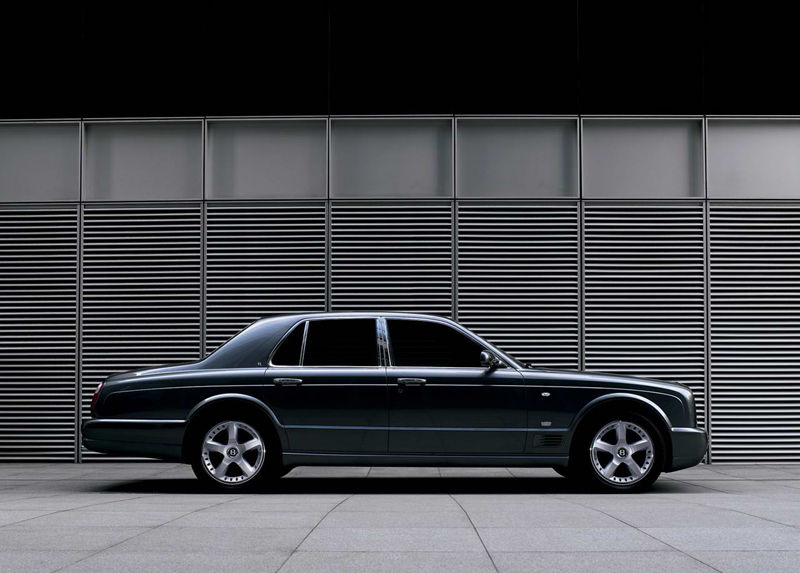 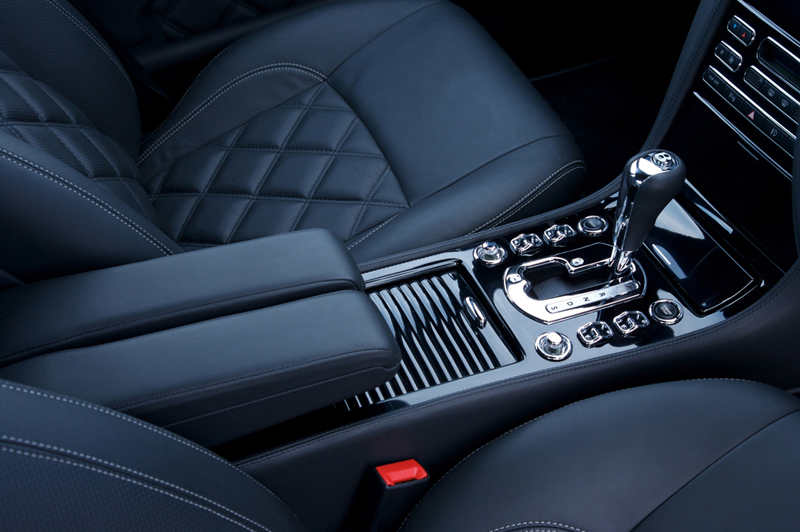 with the introduction of a major programme of powertrain and chassis

powertrain changes are complemented by subtle exterior, interior and

legendary V8 engine ever built at the company's headquarters in Crewe, England.

In the performance-oriented Arnage T model, the revised twin-turbocharged V8

engine produces a staggering 500bhp and 1000Nm of torque - an 11percent

increase in power and a 14 percent increase in torque over the outgoing model.

Twinned with the latest six-speed ZF automatic transmission, which uses

at all speeds. In the Arnage R and RL models the new engine is boosted from 400

Bentley's flagship model remains at the forefront of technology and delivers

the performance, refinement and luxury that every Bentley customer demands,"

explains Stuart McCullough, Member of the Board, Sales and Marketing.

delivers an even more rewarding driving experience. The improvements to the

refinement and comfort of the 450bhp Arnage R are equally striking, while the

improvements to the rear passenger cabin.

"Two years ago we introduced major upgrades to the Arnage's chassis, steering

and brakes," says Dr Ulrich Eichhorn, Member of the Board, Engineering. "Those

and torque, so work began on this important powertrain programme."

options are available, as well as an optional retractable 'Flying B' bonnet

and 1000Nm torque, thanks to new low inertia turbochargers and roller tappet

- Improved driver ergonomics thanks to 25mm increase in length of steering

grilles, and Bentley 'B' badges on the D-pillars.

Bentley's 6.75-litre V8 engine is the centrepiece of the 2007 Model Year Arnage

development programme. This remarkable engine, the fundamental design of which

has served Bentley models proudly for nearly five decades, has been extensively

re-engineered to provide, in Arnage T specification, 500bhp and 1000Nm of torque

astonishing than before. Top speed of the Arnage T has risen from

When the first V8 engine was built in the1950s, the design brief unwittingly

benefited later generations of Bentley engineers. It was a very forward

thinking design with an all-aluminium construction, a five main-bearing

crankshaft, and a well-supported camshaft. The steps taken then laid the

foundations for the longevity of the engine.

Director, Powertrain and Chassis, Brian Gush. "But the reality is the basic

the exhaust valves, high in the cylinder head, originally designed for rapid

heat dissipation to help engine cooling. Decades later it meant that we could

heat the catalytic converter due to the short path from valves to catalysts,

which benefits exhaust emissions. This is just one of the reasons why this

1000Nm of torque for the Arnage T. It was the introduction of turbocharging and

performance, and the latest engine programme is no different. Two new

torque at any revs.

Furthermore, a reprofiled camshaft with an all-new roller tappet system

compliance with European EU IV and US LEV II standards. Although the 2007MY

predecessor, its fuel consumption is only 60 percent of the original and thanks

to its advanced fuel injection and exhaust controls, its emissions output is an

Such an impressive increase in power and torque is, however, of little benefit

unless the powertrain is capable of delivering it to the driven wheels. For

ZF automatic transmission to the Arnage range. This state-of-the-art system

advantages over its predecessor:

- The wider range of ratios is specifically tuned to each Arnage model,

ensuring greater flexibility, response and refinement for every model.

to take full advantage of the new gearbox. Semi-Automatic mode is accessed by

placing the gearlever into the sequential manual gear-selector gate, where a

new ratio can be engaged simply by pushing the lever forwards or backwards.

fast yet smooth gearshifts regardless of how the car is being driven.

Previously the Arnage's engine and transmission were governed by independent

electronic systems; in the 2007 Model Year, an uprated Bosch

unit to produce a supremely refined yet highly responsive drivetrain.

"The new ZF gearbox gives us a different dimension in transmission control,"

says Dr Ulrich Eichhorn, Member of the Board, Engineering. "Our main objective

every ounce of power. Using the lock-up in all gears eliminates what we call the

'rubber-band' effect - the surge of engine speed without a corresponding

"As the engine speed approaches the point at which a gearshift is due, it

signals to the transmission that it is time to shift, so the ratio changes are

much quicker - it feels significantly faster from the driver's seat. Similarly,

just for the period of the shift, which adds to the refinement."

separation of the sports suspension and sports gearbox settings, allowing the

A comprehensive chassis tuning programme was instigated alongside the

powertrain updates to ensure the Arnage's chassis comfortably handles the

handling without any reduction in stability or safety.

The Traction Control system is extensively recalibrated with the aim of

the car's overall stability rather than simply loss of grip to the wheels. This

progressively, allowing the power of the engine to be fully exploited.

"We don't believe in creating power and then taking it away," says Brian Gush,

Director, Powertrain and Chassis. "This new system allows the driver a lot more

freedom to feel where the traction limit is without ever getting into trouble.

the car with some wheelspin but it never lets you get in any trouble. It is a

calibration which keeps the spirited driver in mind."

Following the detailed design updates made to the 2005 Model Year Arnage, the

exactly the sort of contemporary yet authentic Bentley feel that it needed,"

between the Arnage models."

dark finish to its front radiator and bumper grilles. A standardised bright

been applied to the D-pillars on all models.

To highlight the superb feat of engineering beneath the Arnage's bonnet, a

newly styled engine bay leaves no doubt as to the potency of the car. A black

crackle finish has been applied to the Arnage T's inlet manifold, while every

available across the range is the famous winged 'B' mascot, which saw a welcome

return this year on the Diamond Series Arnage. The iconic mascot - which can

retract neatly into the grille surround - was originally designed by motoring

system and reversing camera (US, EU, Australia and New Zealand markets only).

will not just match customer expectations but surpass them on all fronts, as Dr

"These important powertrain enhancements reaffirm the very essence of the

blissfully relaxed cruising when you don't."