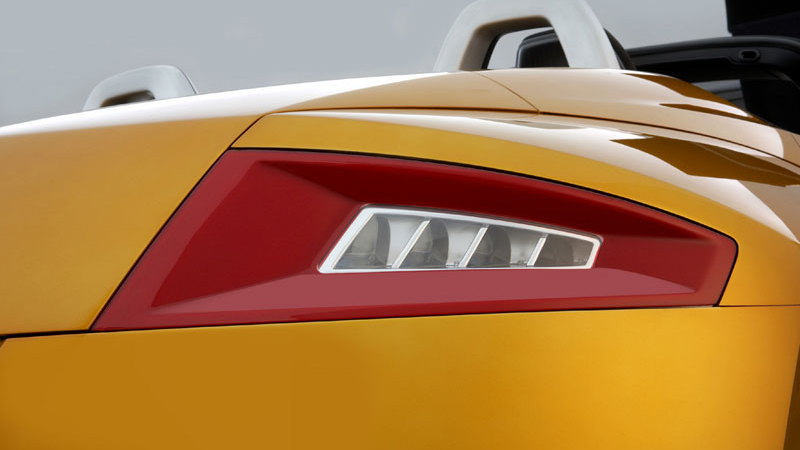 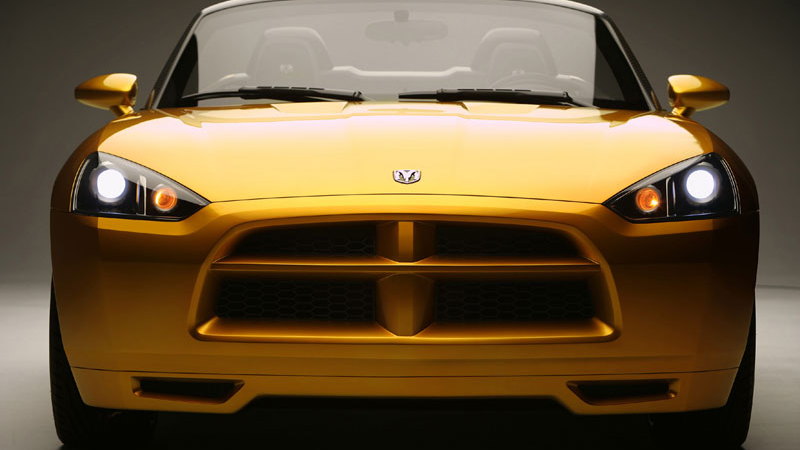 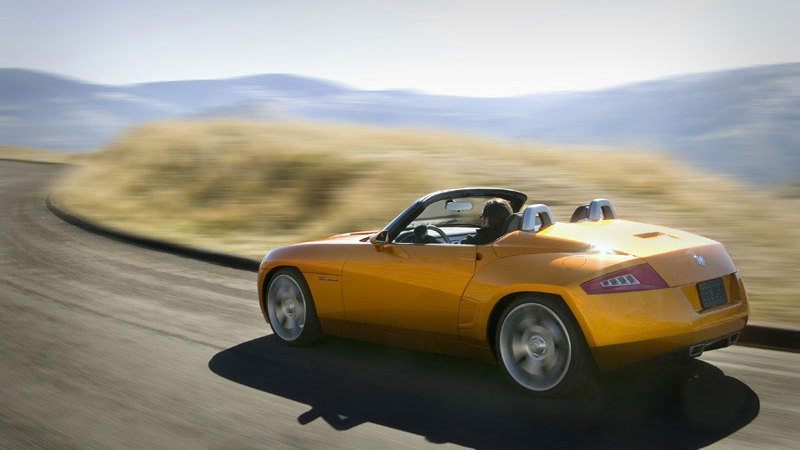 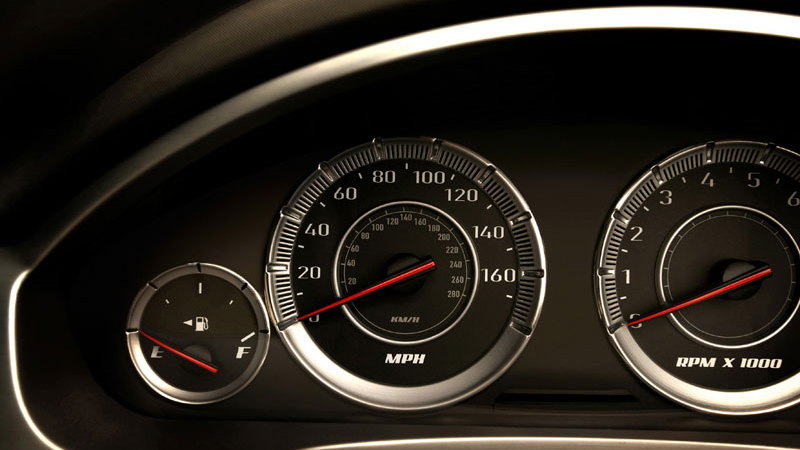 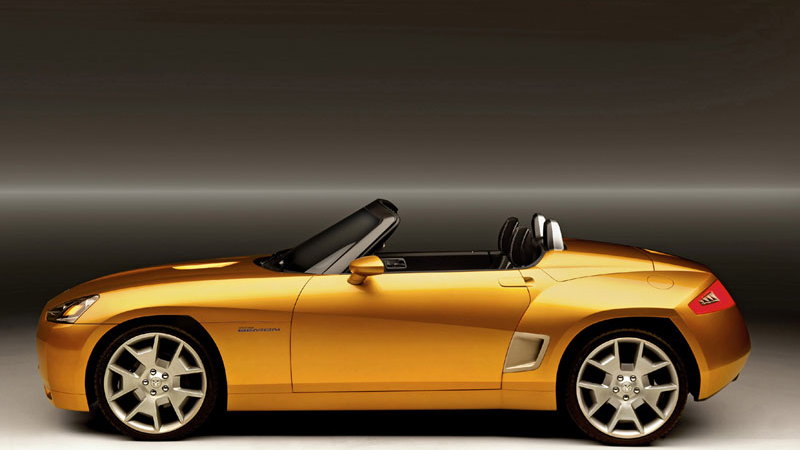 24
photos
Dodge has revealed its new Demon Roadster Concept ahead of its debut at next month’s Geneva Motor Show. The vehicle sits in the same mould as cars like the Mazda MX-5 Miata and the Pontiac Solstice, and is described as a compact, affordable "roadster with an attitude." The Demon features Dodge's signature cross-hair grille, but the main character line, angular color-keyed vents and muscular fenders are all new according to the project’s head designer Jae Chung.

Other key design traits include the ‘angel-eye’ style headlight ornament, 19in brushed aluminum wheels and chromed vertical grab handles. Inside, the car gets brushed aluminum trim, a leather-bound manual shift knob plus the usual mod-cons. One feature that’s unlikely to make it into production is the exposed low-gloss carbon fiber shells backing the contoured racing-style bucket seats.

Beneath the new sheet metal resides a completely new platform and DaimlerChrysler’s global 2.4L four-cylinder engine developing 172hp and 165lb.-ft. of torque. Drive is sent to the rear wheels via a six-speed manual transmission, however, a sequential auto will definitely be an option for any production version along with several other small displacement four-bangers and a possible 300hp turbo unit.

High-res gallery and full press release after the jump.

Geneva – The Dodge Demon concept is a compact, nimble "roadster with an attitude," a perfect balance of classic sports car proportion and simplicity blended with modern design and performance.

"While the iconic Dodge Viper is a dream car for many, the Dodge Demon is designed to be an attainable dream car," said Jae Chung – Dodge Demon Principal Exterior Designer, Chrysler Group. "The exterior design is simple yet bold, featuring an energetic combination of curves and intersecting planes."

The bodyside of the Dodge Demon main character line flows up and over the front wheel, then drops diagonally to an angular color-keyed vent on the rear fender that directs cooling air to the rear brakes. In similar fashion, the compound rear fender surface curves up and over the rear wheel, sweeping into a broad diagonal plane extending to the taillamp. The resulting muscular fender form projects boldly beyond the main body, underscoring that the Dodge Demon concept is a rear-wheel-drive machine.

Up front, the signature Dodge crosshair grille is stuffed into an aggressive, menacing, trapezoidal opening that thrusts boldly forward.

Set into elongated angled triangles, the projector headlamps, delineated by bright rings, are set into black chrome bezels, giving the front end mean-looking "eyes" that accentuate the grille opening. Encompassing the upper portions of the front fenders and sporting two recessed air outlets, the Dodge Demon's hood is hinged at the front, adding a just-for-fun performance-car look and feel.

Featuring an open-spoke design, the wheels are pushed to the corners of the body for a dramatic stance and capable performance. The 19-inch brushed aluminum wheels are set into assertive, asymmetrical openings that reprise the body's playful combination of curves and planes.

The beltline kicks up at the rear and into the higher deck lid contour, giving the lucky occupants an encapsulated, protective feeling.

"In the manner of timeless British sports cars, the interior of the Dodge Demon is purposely functional, not frivolous," said Dan Zimmermann – Dodge Demon Principal Interior Designer. "Everything relating to the driving experience is emphasized, while that which is not is made visually secondary.

"The well laid out instrument panel, for example, is familiar, yet modern. Everything you really need – the gauges, circular AC outlets, radio – is encapsulated in a cross-car brushed aluminum bezel that also accentuates the width of the cabin. Secondary controls and features, such as the HVAC knobs and the passenger-side glove box, are located below this bezel," Zimmerman added.

In a similar functional manner, the floor console is deliberately not a part of, or attached to, the instrument panel. The console is dominated by the squat ready-at-hand silver and black manual shift knob, and its leather boot is set into a bright trim ring. The wide, brushed aluminum console bezel also incorporates the recessed emergency brake handle, with the window switch gear, softly lit cup holders and 12V power outlet organized into a graphically unified shape. The upper portion of the instrument panel, including the cluster brow, is accented by a stitched seam with contrasting silver thread.

"Each of these features is set flush, or nearly flush, with the bezel surface so as to establish a 'clear zone' for the driver's shift arm in all seating positions, with nothing in the way of the driving experience," Zimmerman said.

The raised plateau at the rear of the console incorporates a covered storage bin – with a lid that serves as an armrest between shifts – while the portion of the console extending under the instrument panel has an open bin handy for incidentals.

The steering wheel employs an aluminum open-spoke design with each of the three spokes intersecting the small circular hub for a timeless sports car look. The wheel rim itself is brushed aluminum on the inside, complemented with stitched vinyl on the outer rim. Immediately forward of the wheel, the four-gauge cluster features classic white-on-black dials with graphics inspired by sports watches. Each circular gauge is set handsomely inside a finely detailed silver and chrome bezel ring, while gauge pointers are colored to match the exterior.

The doors feature durable, vertical grab handles, each anchored to a silver bezel housing the chrome door remote handle. The lower portion of each door features a stylish brushed aluminum bezel that encapsulates the large circular speaker grille and then drops sharply as it moves rearward to form the map pocket outer panel, mimicking a feature line on the car's exterior.

The Dodge Demon's seats feature contoured bolsters that are just high enough to provide support when cornering, yet do not hinder ingress or egress. Set in exposed low-gloss carbon fiber shells, the black seats with integral head restraints feature inserts of textured "Momentum" fabric mated to fabric bolsters, with specific sew lines accented by silver thread. Individual brushed aluminum and carbon fiber roll bars are positioned directly behind the bucket seats. With long seat tracks, there is ample storage behind the seats. Additional covered storage is provided in the bulkhead between the seats.

The Dodge Demon concept is an affordable Dodge sports car which merges brand cues of bold design and powerful performance with an open-air "fun-to-drive" attitude.

Dimensions are in inches (millimeters) unless otherwise noted.