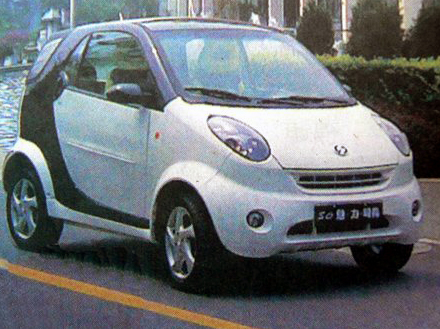 Chinese copycat cars caused enough trouble when they were sold in China, but the new generation of copycats about to be sold in Europe are putting legitimate manufacturers on the defensive. The latest case involves the Shuanghuan Noble (pictured inset), a minicar whose styling is, to put it politely, derivative of the Mercedes Smart car. Though it was earmarked for sale shortly after its debut at the Frankfurt auto show, legal action from Mercedes could mean it'd be barred for sale, reports Automotive News.

The German importer is China Automobile Deutschland who claims it'll sell the Noble priced at around €7,000, making it Germany’s cheapest car. A Mercedes spokesman has said the company is looking at legal action and alleges that the Noble is trying to cash in on the hip appeal of the Smart.

One factor being overlooked is safety. Mercedes can afford to sell a car like the Smart because it’s backed by their leading safety record. In crashes with much larger cars, the ForTwo has fared extremely well for such a small car. We wonder how well the Shuanghuan Noble will do.