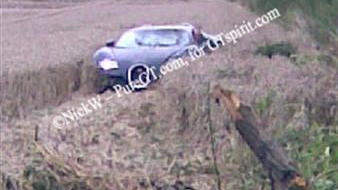 4
photos
Another Veyron has met a bitter and untimely end, this time at the hands of a driver apparently convinced the car was suitable for plowing a wheat field in West Berkshire, UK. The crumpled front end and left front quarter panel, undercarriage and collapsed windshield indicate this was more than a minor off-road excursion, marking the second documented Veyron crash.

The first crash also involved the left front of the car and a UK driver. This second incident appears to have occurred under similar circumstances to the first. Caught in a series of photos posted at GT Spirit, the crashed Veyron features an odd damage pattern. Though the car does not appear to have been rolled over, the damage to the windshield is significant, and appears to have come from the front or above the car. The portion of a tree stuck through the left headlight taken with the broken remnant in the foreground of another photo indicates the accident may have at least partly featured the tree in a key role as well.

Apart from the fact of the accident itself, little is known other than that the driver lost control on a long curve. Given the car's final orientation to the road, it may have simply come down to speed-induced understeer pushing the car onto the apron where it subsequently struck a number of roadside obstacles, including a hedgerow, a tree and the wheat field.