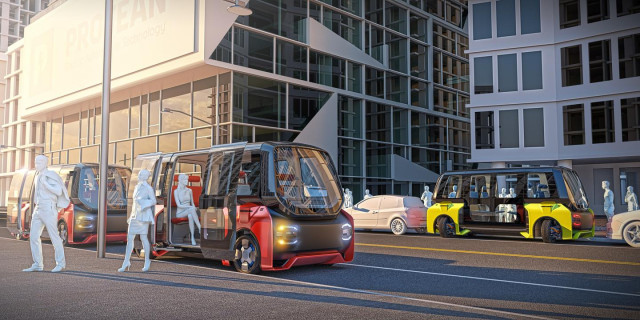 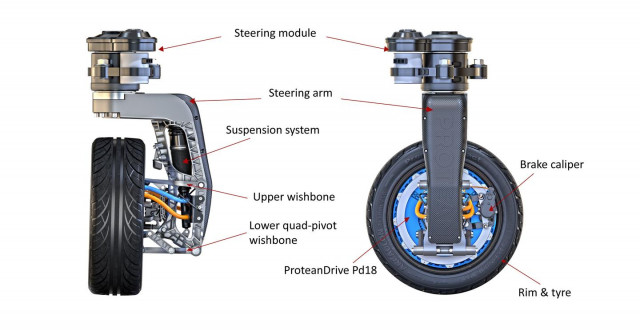 The 360-degree steering setup was made possible thanks to in-wheel motors developed by Protean, which NEVS acquired back in June. This compact system packages the electric motor and brake assembly inside the barrel of the wheel, which is suspended from the vehicle chassis like a caster and steered from above, rather than via a horizontally mounted rack.

The lack of a central drive unit allows for a much more open interior cabin. Only the size and shape of the battery pack and the desired ground clearance dictate the height of the vehicle floor, which can also be almost or even completely flat (if the wheels are mounted outboard).

This chassis flexibility allows for conveniences such as doors mounted on all four sides of the vehicle, maximizing options for safe and convenient passenger entry and exit. The 360-degree steering allows the pods almost complete freedom in both perpendicular and parallel parking scenarios, along with turn-on-a-dime maneuverability in tight spaces. With their kneeling suspensions, they're also ideal for passengers with physical disabilities.

NEVS announced in July that it partnered with AutoX to develop a large-scale autonomous taxi network in Europe. AutoX will provide A.I.-based autonomous driving systems, presumably to be employed in NEVS' new pods. The companies said they plan to have a pilot program up and running by next year.

Taxi fleets are not the only target for the pods; NEVS sees them being used as delivery vehicles, private transportation and small-scale shared mobility. "Whether shared or private, for passengers or goods deliveries, human-driven or autonomous, these new vehicles will require new technologies to be fit for purpose," NEVS said in its announcement.