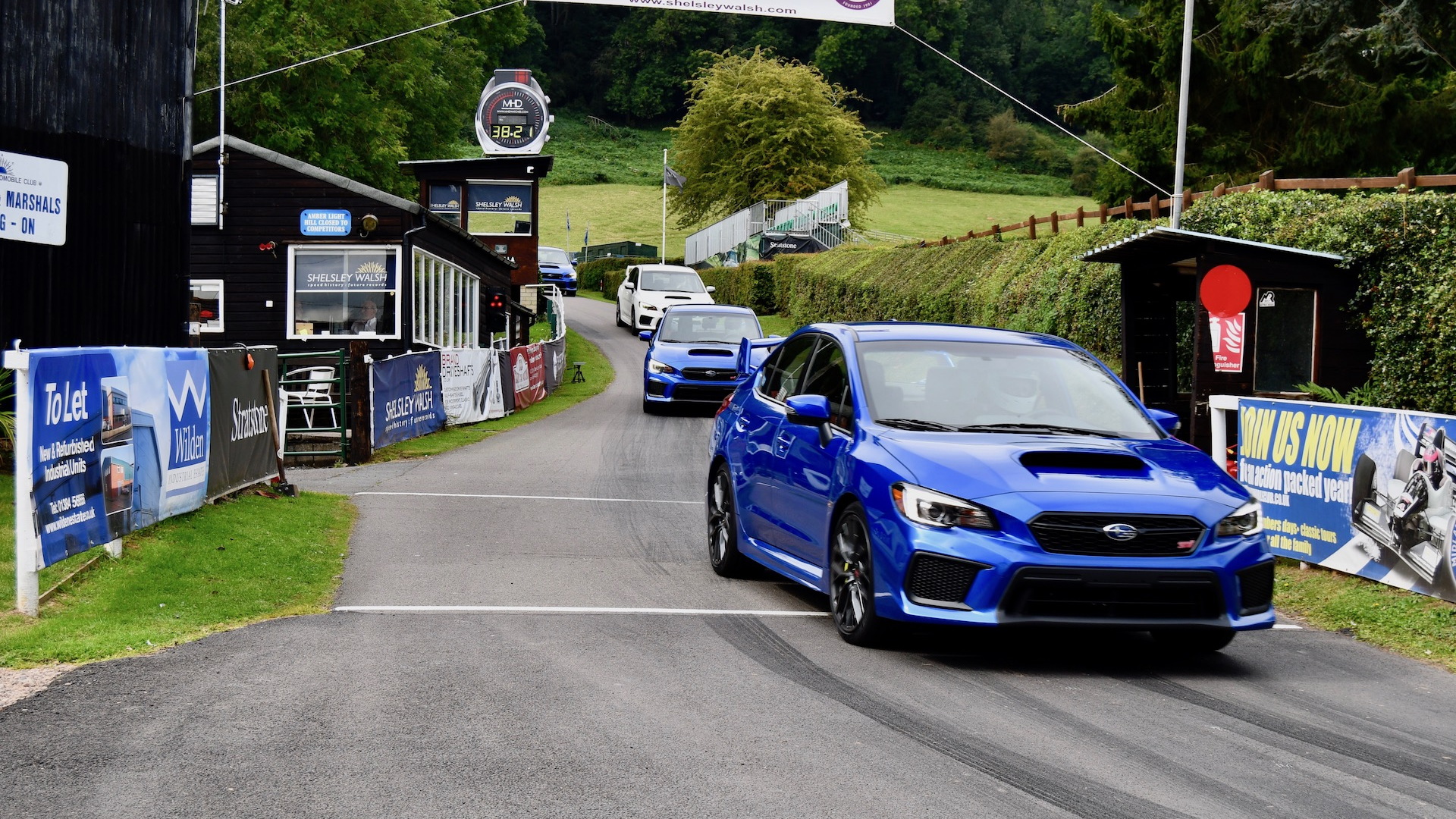 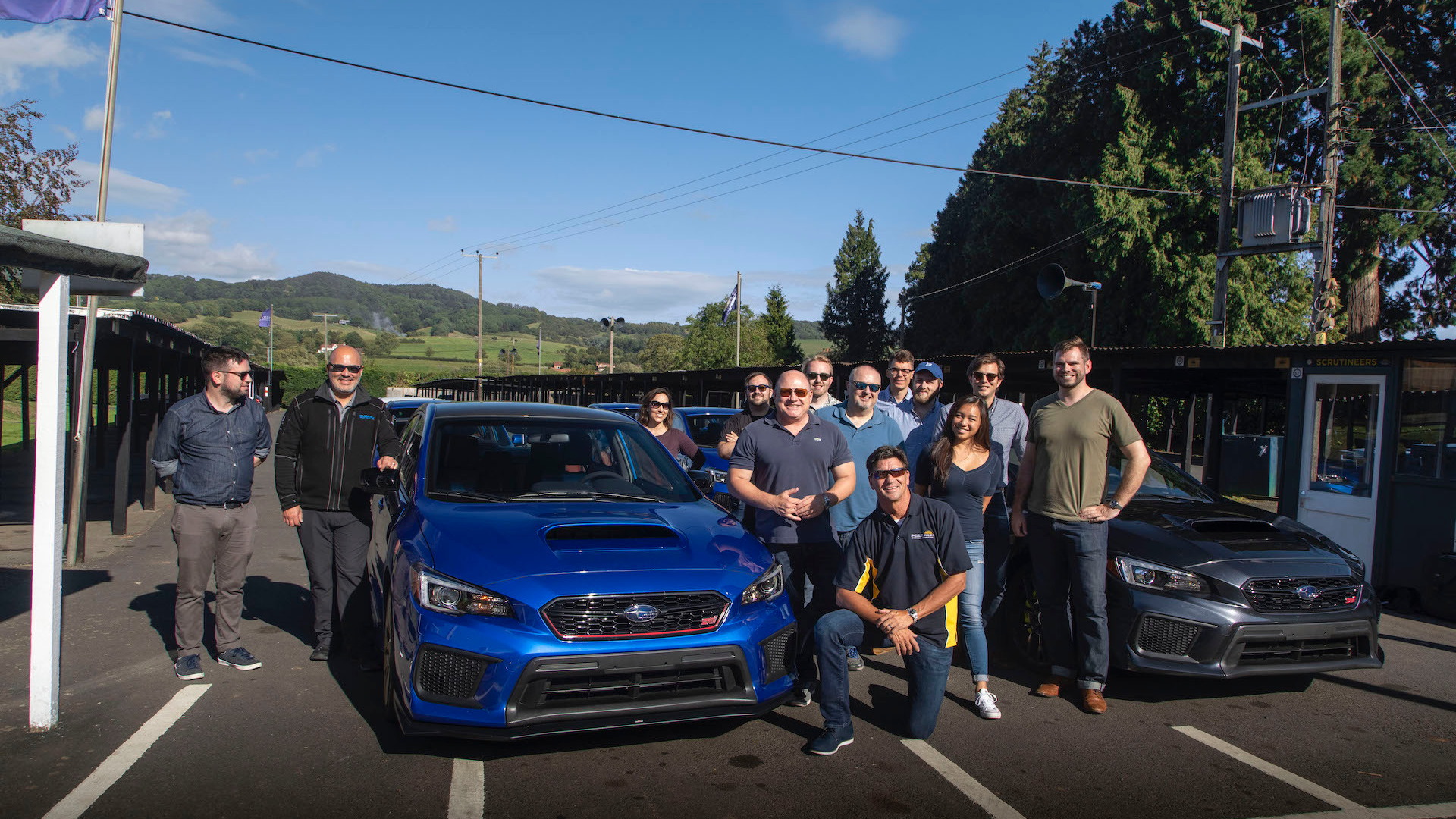 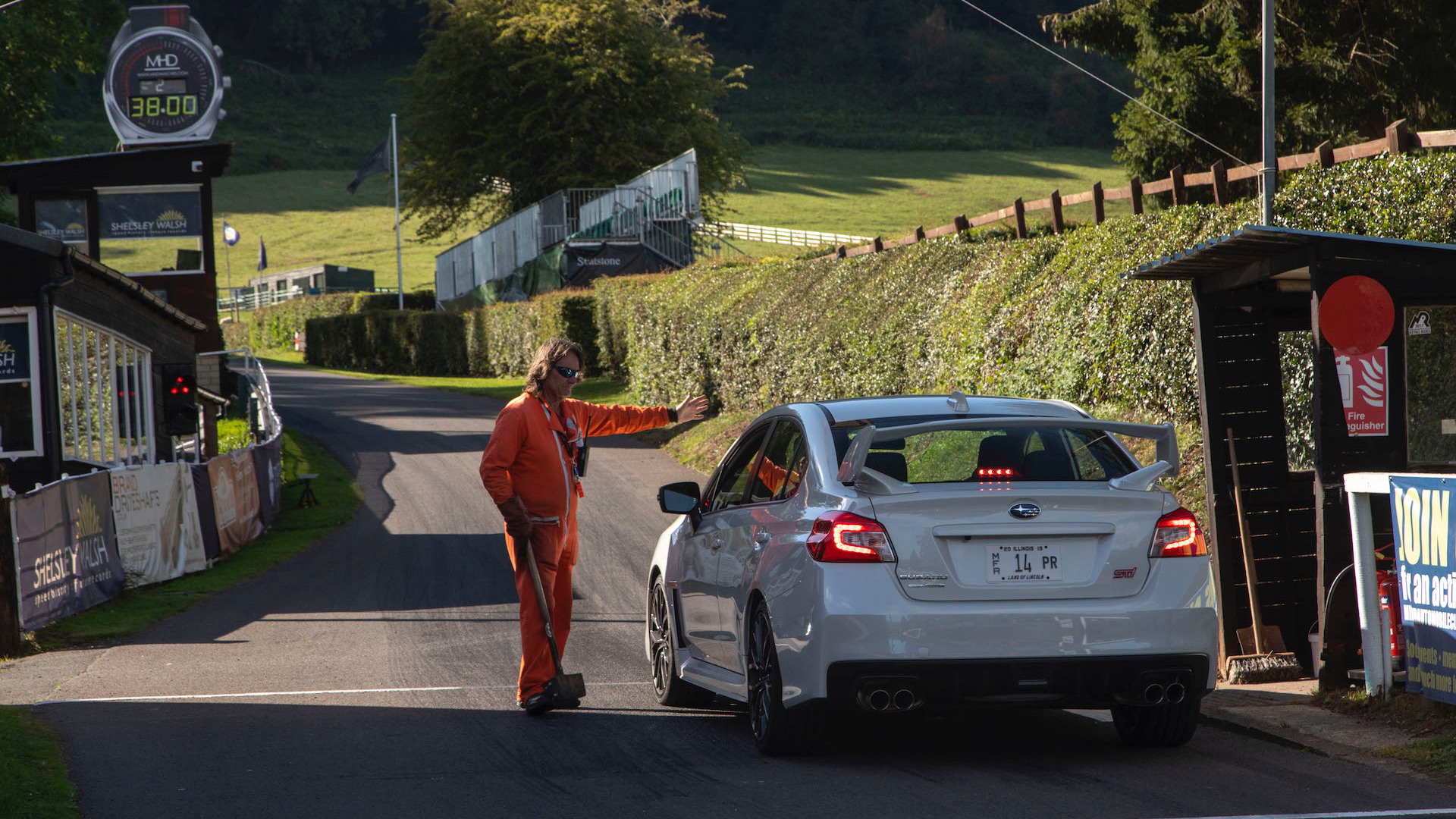 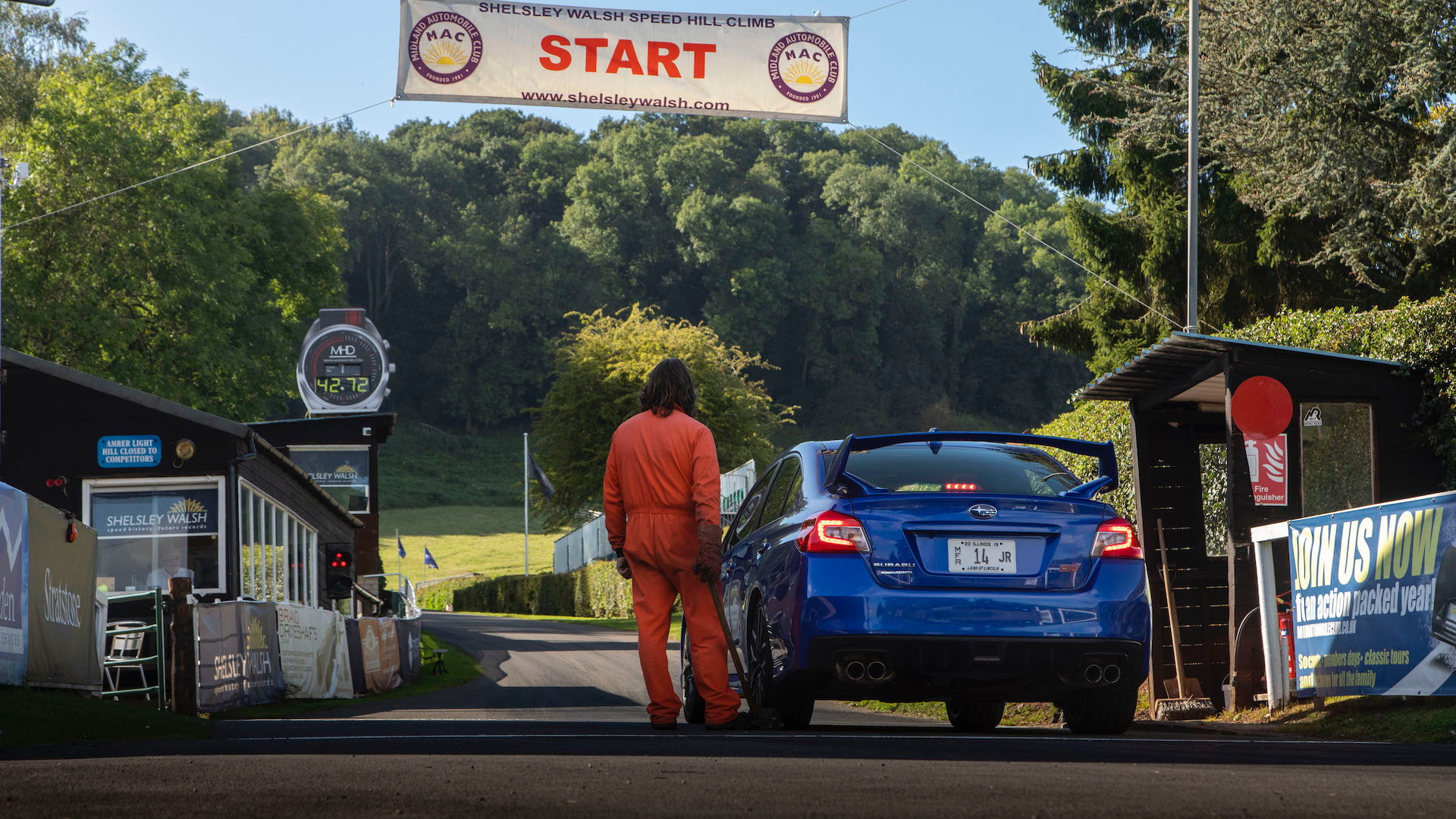 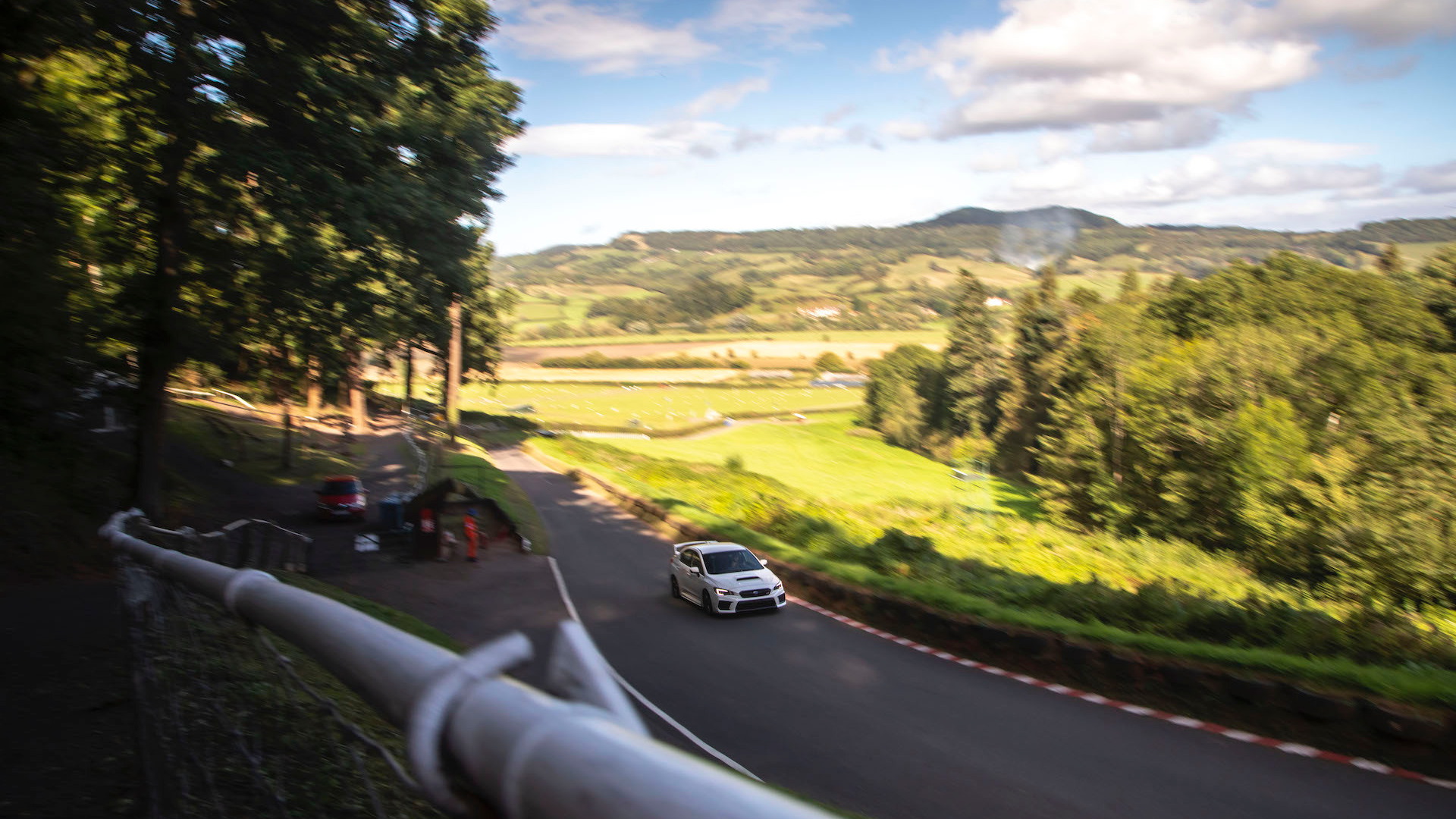 On a beautiful, sunny September day, 1,000 yards of hedge- and tree-lined hill lies in front of me in rural central England, and I’m about to fly up it as fast as I can in a 2019 Subaru WRX STI. I have two goals: beat the pre-war best time and go faster than the other nine auto journalists assembled at Worcestershire, England’s Shelsley Walsh Hill Climb.

Shelsley Hill is history personified. It shares its property with a restored mill that dates back to 1308. The first run here took place in 1905 and it’s been in use ever since (except for the World War II years for obvious reasons)—first as a dirt road, then starting in 1933 as a paved lane—and that makes it the oldest continually used racing circuit in the world.

Raymond Mays in his ERA R4D at the start of the Shelsley Walsh Hill Climb on Jue 28, 1938

The first hill-climb winner, Ernest Instone, posted a time of 77.6 seconds in a 35-horsepower Daimler on Aug. 12, 1905. By 1939, the best time had fallen to 37.37 seconds, a mark set by Raymond Mays in his ERA R4D. The members of the Midland Automobile Club that runs the place don’t think we’ll beat that pre-war time in our 310-horsepower all-wheel-drive Subarus. I think we might. I also think I have a good shot at coming out on top in our informal competition…not that I’m competitive or anything.

It's a rite of passage—or a sadistic ritual—for new drivers to walk the hill before a run. The Midland crew says the idea is to help drivers read the road and better understand the turns. It helps, I think, but a couple rides sitting shotgun teach me a lot more. That leads me to believe the motivation is sadism. It leaves me winded, but I’m ready to get behind the wheel.

A marshall starter in an orange jumpsuit who looks like a retired British rocker helps prep the STI for its launch at the starting line. He has me pull up to the line off to the right to line up the car for the first turn, which is a left-hander. He then places a chock behind one rear wheel so the STI won’t roll backward while in neutral. Correctly positioned, I let off the brake and wait a beat or two for the hill-start-assist system to disengage. At this point, the weight of the STI is sitting on that chock.

I have some decisions to make before I take off. At what rpm should I launch? Traction control on or off? What settings should I use for the Driver Controlled Center Differential and the SI Drive mode controller? I decide to go with traction control on, figuring the tires won’t slip with the STI’s standard all-wheel-drive system. Sport Sharp is the obvious choice for SI Drive. It quickens throttle response and allows for max turbo boost. For the DCCD, I choose the Auto- setting, which sends more power to the rear wheels and makes the limited-slip differential less prone to locking, which lets the car rotate better through corners.

Launching at around 4,000 rpm should keep these cars from chewing through their clutches—we need them to get back to the hotel after all.

I experiment with a few different launches before I settle into what seems to work best. Rocked back into the chock, I rev the 2.5-liter turbo-4 to 4000 rpm, dump the clutch, and scoot away. It seems to work well on my first run, though I’m past the 64-foot clock before I can get a readout. In watching other drivers, though, times between 2.4 and 3.2 seconds are possible here, so almost a second can be lost at the line.

I try the same launch again, but this time the traction control light in the instrument panel flashes and I feel the car bog down before it picks up again. This launch is probably closer to 3 seconds or worse. Lesson learned.

From here on out, I turn off the traction control, go with DCCD Auto-, and vary between 3,500 and 4,500 rpm. I think it’s getting me off the line quickly.

After the launch, the STI hurtles along a row of hedges on the right and the Breakdown/Incident building on the left toward Kennel Bend, which is close enough to the start that I have to shift quickly to second in the middle of the slight lefthander. From there, I can stay flat on the throttle and shift to third as I approach the first really hairy turn.

That turn is the slight left-hander known as Crossing. The car seems like it’s in a valley here as the earthen wall rises to eye level on the left while trees sprout from the hill that sits above the car on the right. I can probably stay flat here as well, but the road is narrow, the walls feel like they are closing in, and I don’t want to wad up this car, so I lift through the bend then get back on it.

The first sharp turn, Bottom S, comes up quickly but the car begs for fourth gear just before it’s time to brake. That requires shifting up, then back down two gears instead of one. I’m not sure if it’s better to run along the redline for a few feet or make that shift. I end up doing both throughout the day.

Bottom S is all about how late I can brake. It’s intimidating, because the right side is a wooden wall that also sits at eye level. The car is likely hitting 80 mph here or maybe more, but I don’t have time to look. A cone on that wall marks the suggested braking point, but I never go that deep because it feels like it’s too close to the turn for this 3,400-pound car. Bottom S is something of a throwaway anyway because Top S is just a few feet away and it’s important to get the car back to the left to hit the Top S apex and run the car up the rest of the hill.

The track crew warns not to go too tight into Top S because a drain positioned on the inside of the turn can upset the car and send it into the grassy outside wall. Instead, they recommend turning at the big oak tree on the left, which will position the car for a late apex, and send it up the final 200 or so yards to the top of the hill with the most speed.

I follow that advice, but also work closer to the drain throughout the day. All my turn-in points here are probably within a foot or two of each other and I don’t know that it makes any difference as the car is consistently between 78 and 80 mph when crossing the finish line. Each time, I reflect on what went wrong and what went right during the run, and I’m anxious to do it again.

In the morning session, my best time is 36.38 seconds, with several other runs in the 36s and 37s. Tick off one goal as accomplished, as I’ve bested the pre-war time by almost exactly a second. With that in mind, my goal for the afternoon is to break into the 35s.

Just one of the cars here is a 2018 WRX STI Type RA, which gets slightly less weight, a short-throw shifter, Brembo brakes with cross-drilled rotors, Bilstein dampers, stickier tires, and a big carbon-fiber rear wing. It feels tighter and it appears this car hasn’t been beaten as badly as the others, which came from a Subaru winter driving school. I didn’t touch this car in the morning, but I claim it for a few runs in the afternoon. Its clutch feels better, it’s steering wheel is aligned, and I feel like I’m achieving better times, but I won’t be sure until the times are revealed at the end of the day.

Finally, the fun is over and I learn my best time: 35.98. It was likely in the Type RA, but I’m not sure, and even if it was, the performance equipment on that car only accounted a four-tenths of a second improvement. Nonetheless, I accomplished goal No. 2 and broke into the 35s.

What about that final goal? Did I beat the other nine journalists? I’m happy to say I did. Only one other journalist cracked the 36s and my time was almost a second quicker. Not that I’m competitive or anything.

Subaru paid for travel and lodging for Internet Brands Automotive to bring you this first-hand report.