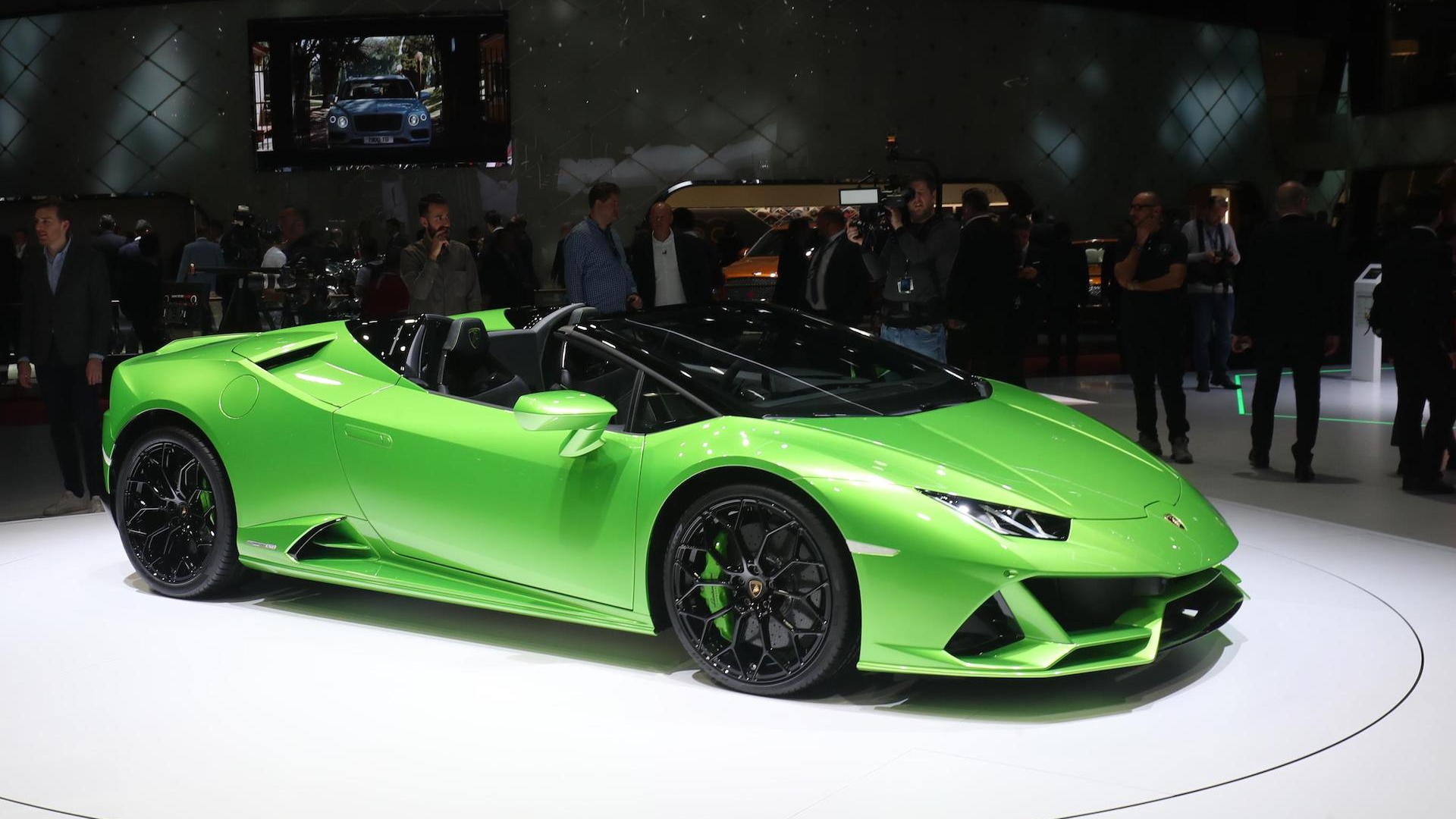 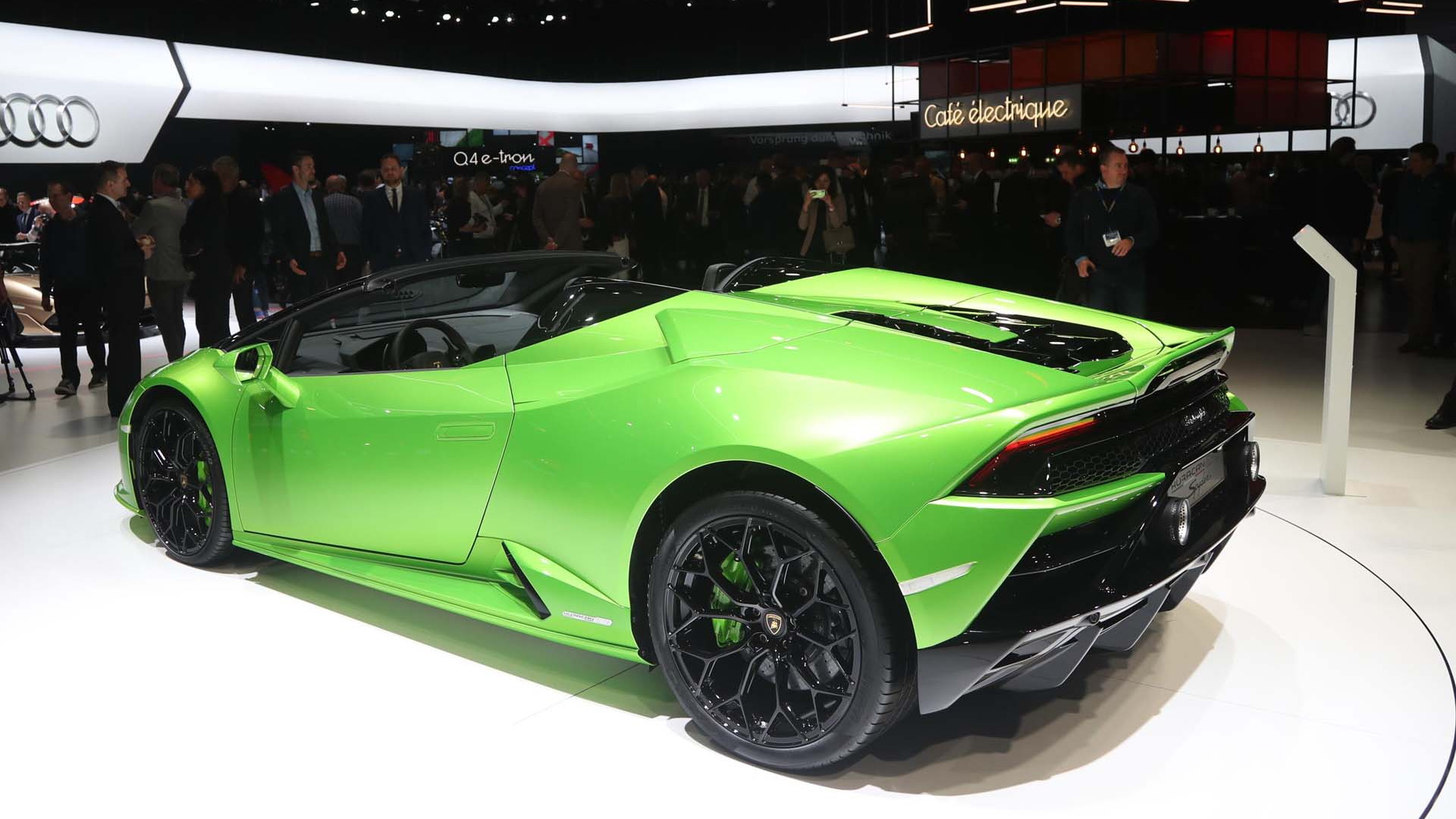 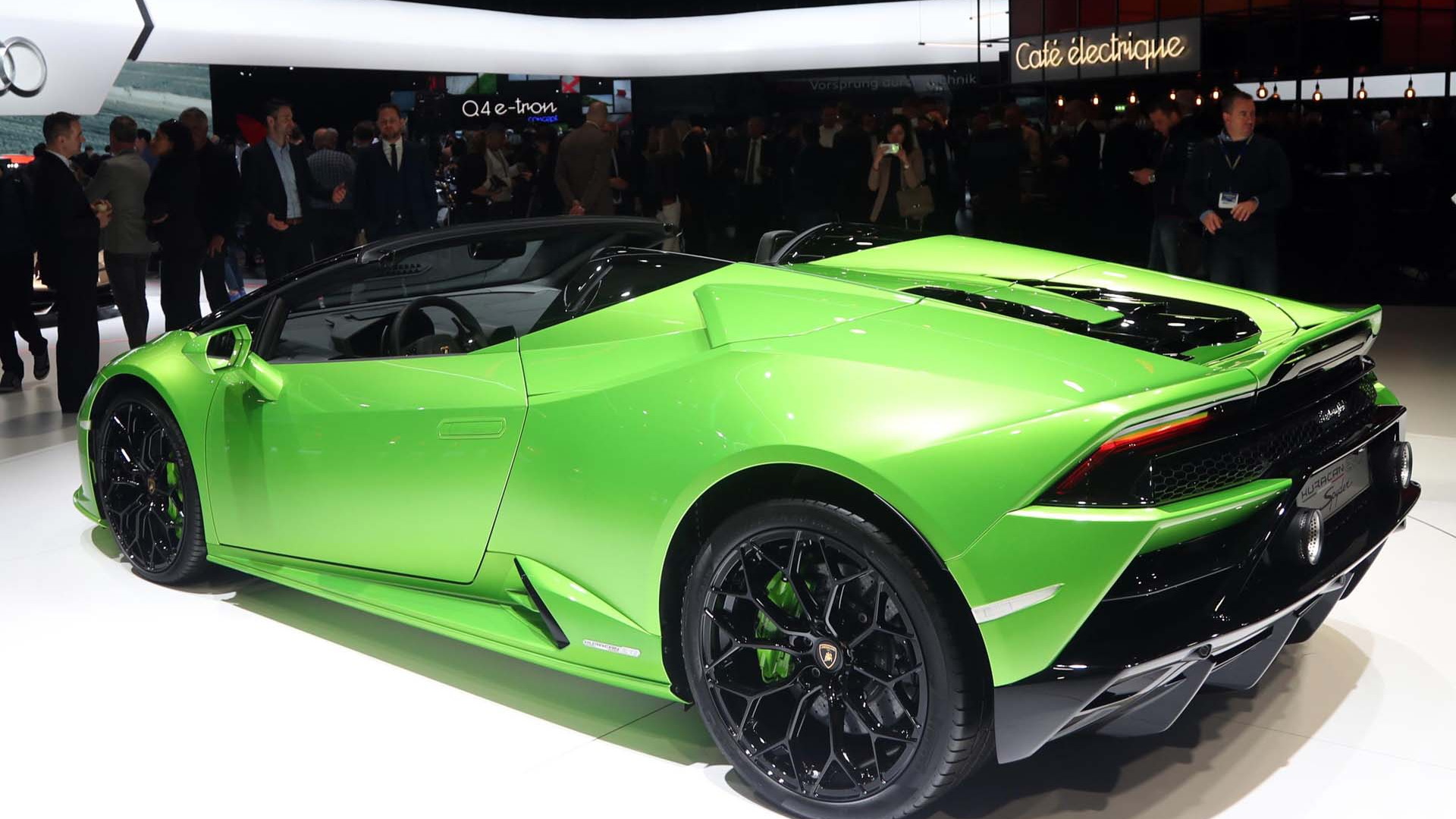 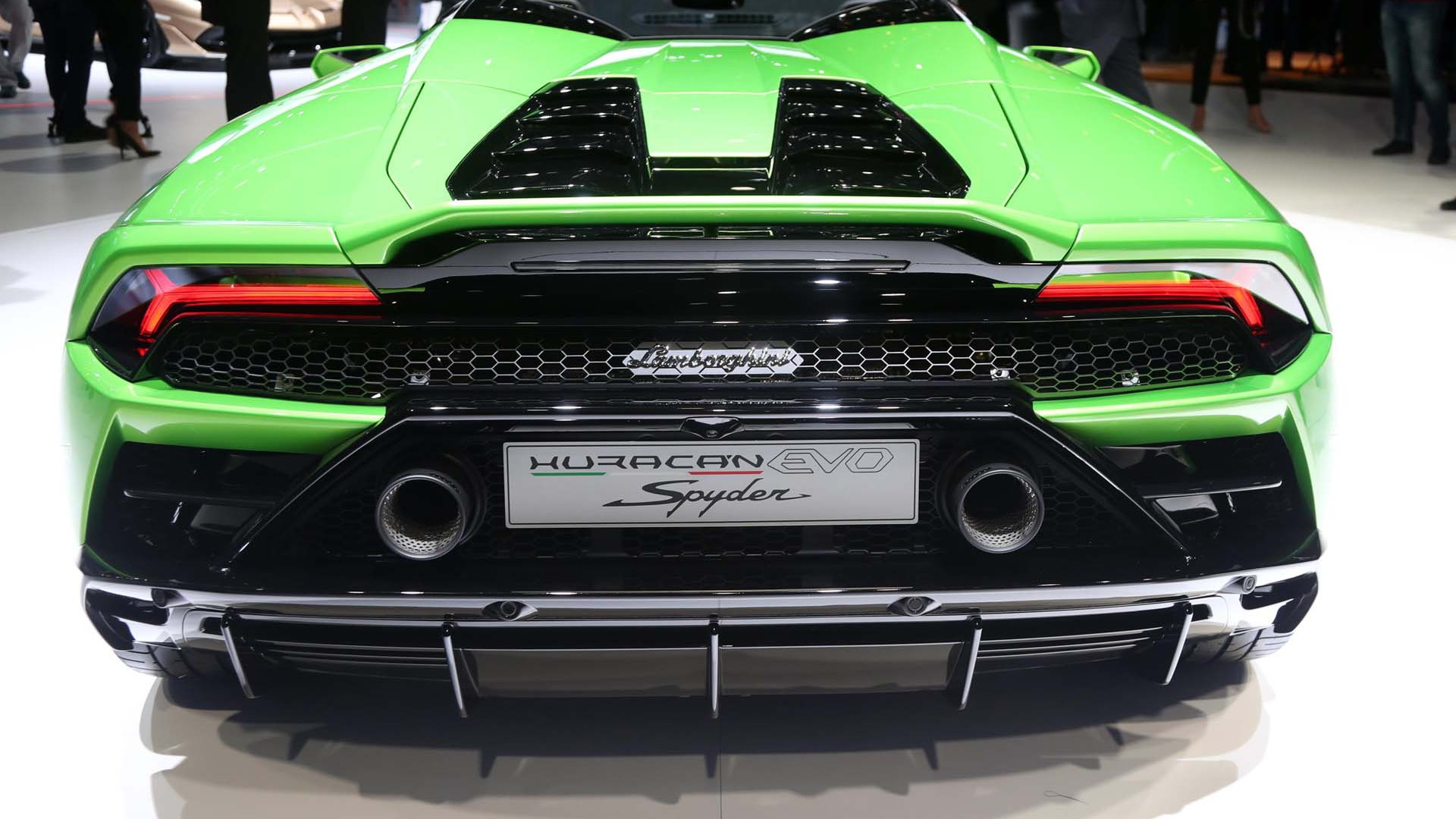 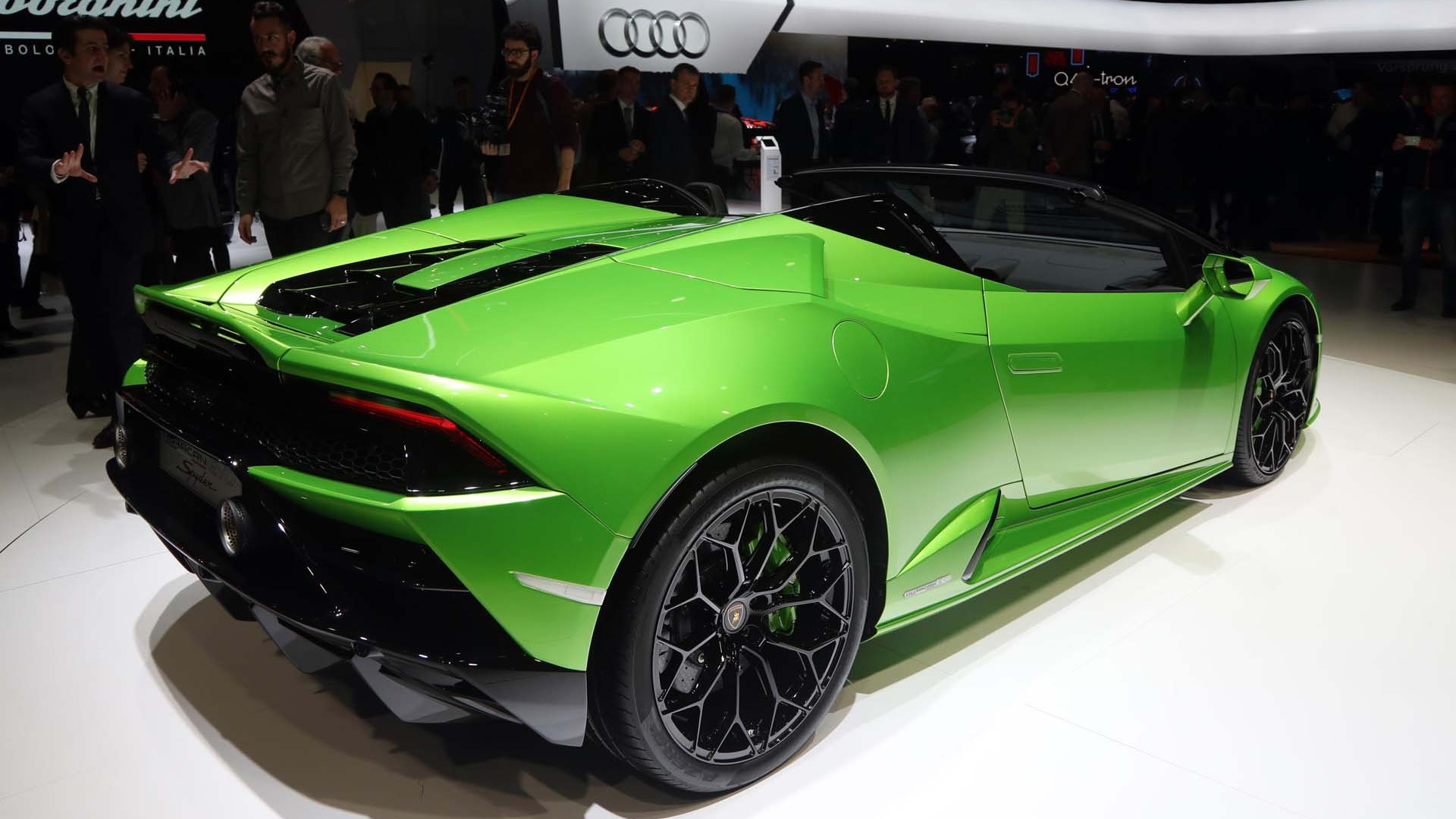 Lamborghini will bring not one, but two Huracán Evo models to the 2019 Geneva Motor Show. On Tuesday, the Italian firm lifted the lid on the Huracán Evo Spyder, essentially an Huracán Evo coupe sans roof.

The supercar maker said it worked hard to ensure the Spyder didn't compromise the performance of the Huracán Evo coupe. Notably, the drop-top version maintains the coupe's aerodynamic prowess and Lamborghini said the Huracán Evo Spyder has five times more downforce than the original Huracán Spyder. Airflow into the cabin is also minimized.

With its soft-top roof, the Spyder inevitably adds some weight to the equation. The open-air experience brings the final dry weight to 3,399 pounds compared to the coupe's daintier 3,135 pounds. We assume the weight penalty is the biggest contributor to the slower 0-62 mph time, too. Lamborghini said the Spyder will do 0-62 mph in 3.1 seconds, just a smidge slower than the coupe's 0-62 mph time of 2.9 seconds. It'd be unfair to call the Huracán Evo Spyder slow. After all, it can reach 202 mph. Carbon-ceramic brakes arrest all that motion.

Power comes from the same naturally aspirated V-10 found in the coupe: a 5.2-liter engine that makes 640 horsepower and 442 pound-feet of torque. Shifting duties are handled by a 7-speed dual-clutch automatic transmission and power flows to all four wheels through an all-wheel-drive system.

The Spyder gains the coupe's four-wheel steering system and torque vectoring. The latter is able to send torque to the outside rear wheel in a turn. Both systems are controlled through the Lamborghini Dinamica Veicolo Integrata (LDVI), which also controls every aspect of the car's setup and dynamic behavior. The computer processes data in real time and is able to anticipate the car's next move. Lamborghini said it helps create an incredibly agile car that looks at various driver inputs along the way. The next generation of magneto rheological dampers adapt to driving style and road conditions based on the chosen driving mode: Strada (Street), Sport, and Corsa (Track).

Inside, the Huracán Evo Spyder houses the biggest changes: controls for the soft-top roof and rear window. Drivers can open the rear window with the roof up or down, which allows more of the V-10's soundtrack to enter the cabin. Dropping the top takes 17 seconds and can be done at speeds up to 31 mph. Like the coupe, the Spyder receives a new 8.4-inch touchscreen infotainment system with Apple CarPlay compatibility and gesture controls. Buyers also have the choice of interior motifs that mix Alcantara and leather and style packages that include carbon-fiber touches.

The Huracán Evo Spyder will make its public debut in Geneva before the first models reach customers this spring, likely as a 2020 model. Prices start at $287,400.