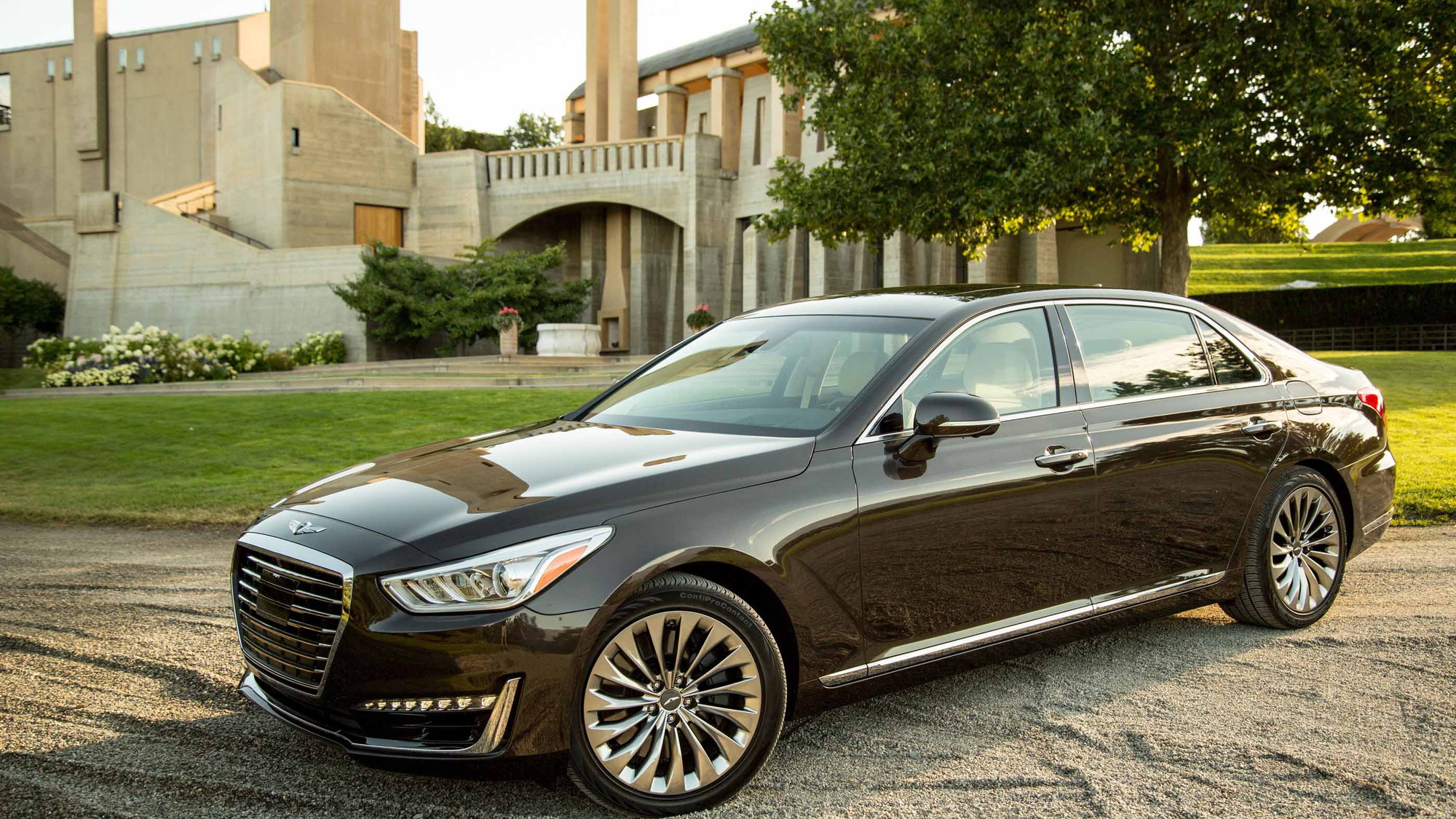 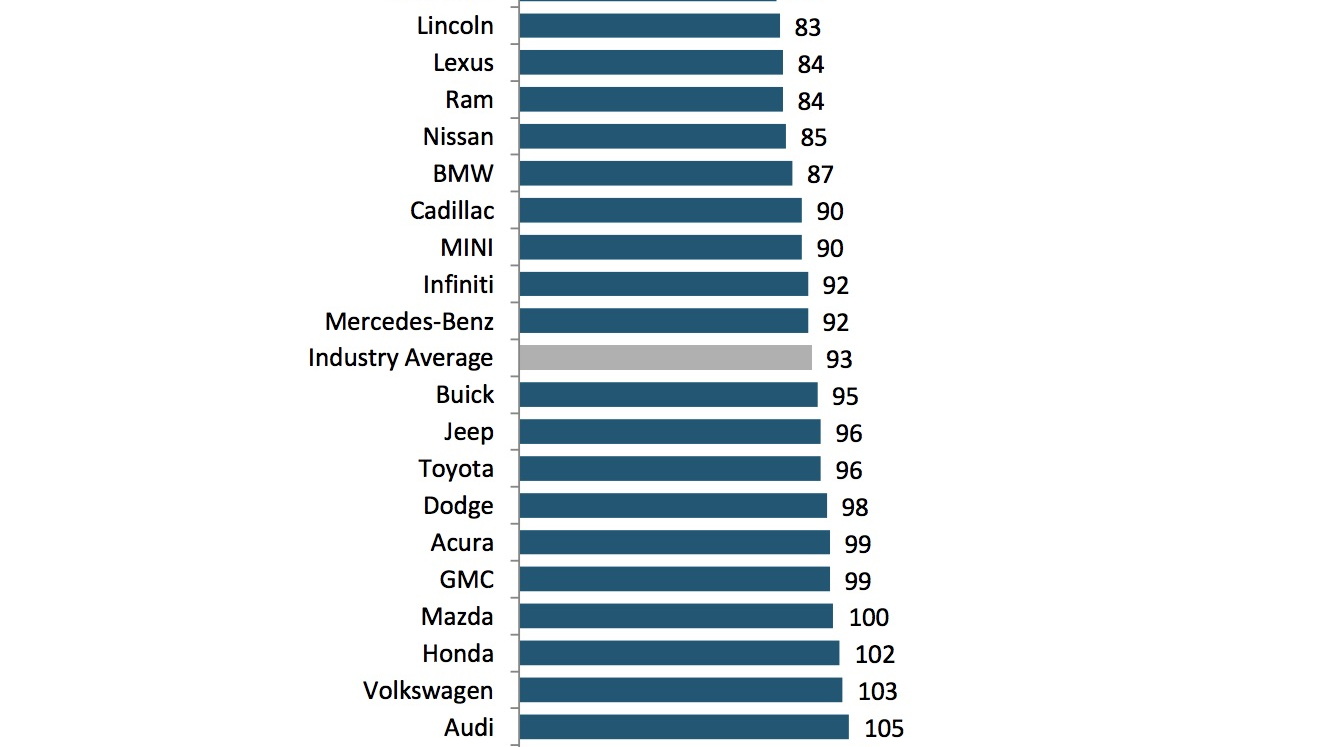 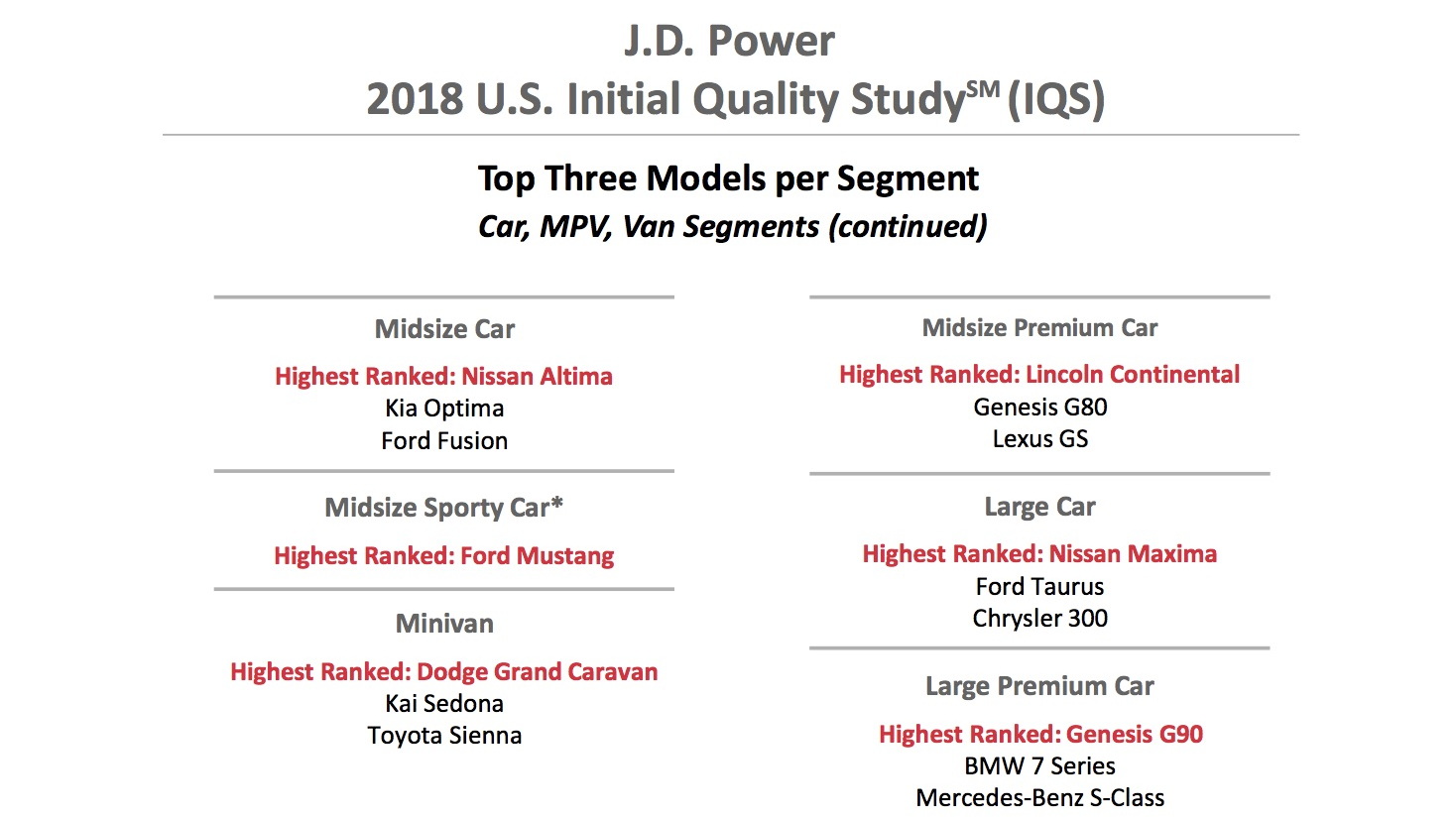 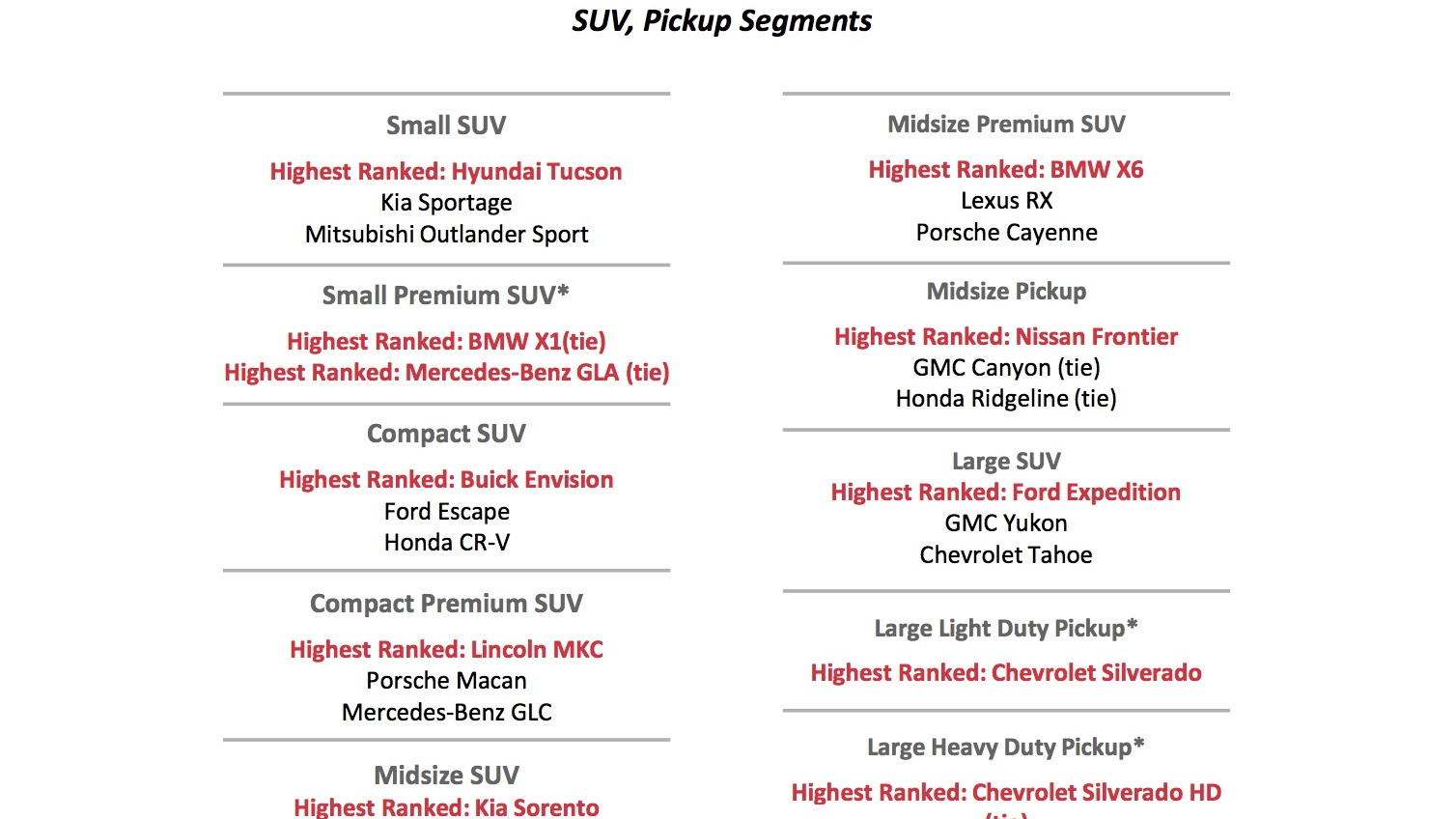 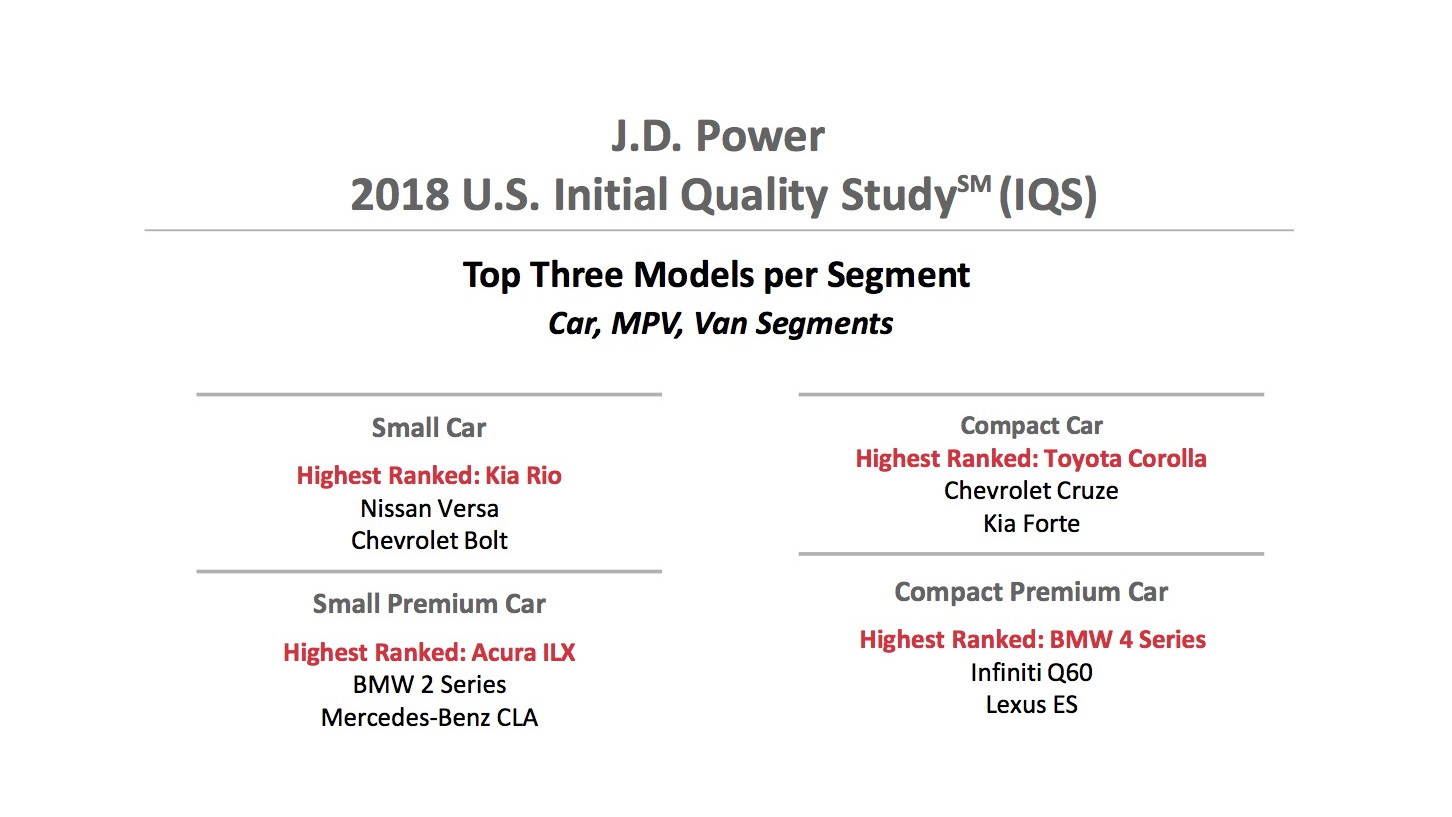 For the first time ever, the three major Korean auto brands in the United States topped the J.D. Power Initial Quality Study. For 2018, Genesis took the number one spot, followed by Kia in second, and Hyundai in third. The 2018 results knock Porsche from the top three for the first time in years.

J.D. Power measures initial quality in problems per 100 vehicles during the first 90 days of ownership, or PP100. A lower score reflects fewer problems with the brand's vehicles.

The results reflect a major surge for Hyundai, which placed eighth in 2017 with a score of PP88. This year, the Korean brand boasts a score of PP78. Kia held steady with a PP72, but Genesis also made huge strides with a PP68, down from a PP77 last year. Porsche's slip to fourth place doesn't reflect many additional problems with its vehicles, but the fact that the Hyundai and Genesis scores improved dramatically. Porsche's score rose only one point to PP79 over PP78 from last year. The final place in the top five goes to Ford with PP81.

Overall, most vehicle areas showed vast improvement for 2018. Quality improved across six of the eight categories measured. Furthermore, 21 of the 31 brands included in the study improved their quality from last year. As has been a trend, domestic automakers have improved the most this year. Fiat-Chrysler Automobiles saw a 7 PP100 improvement, while both Ford and GM experienced a 5 PP100 improvement. Each bested the average of a 4 PP100 improvement across the industry.

Land Rover, Jaguar, and Volvo fill the bottom three spots on the list with scores of PP160, PP148, and PP122, respectively.

Although initial vehicle quality has improved, and infotainment system quality has become less of a problem for owners, a new problem has opened up: driver assistance systems. J.D. Power noted more consumers are experiencing issues with such systems as they proliferate across automakers' lineups. The figure is still low (3.5 PP100), but the problems have increased 20 percent in the last three years.