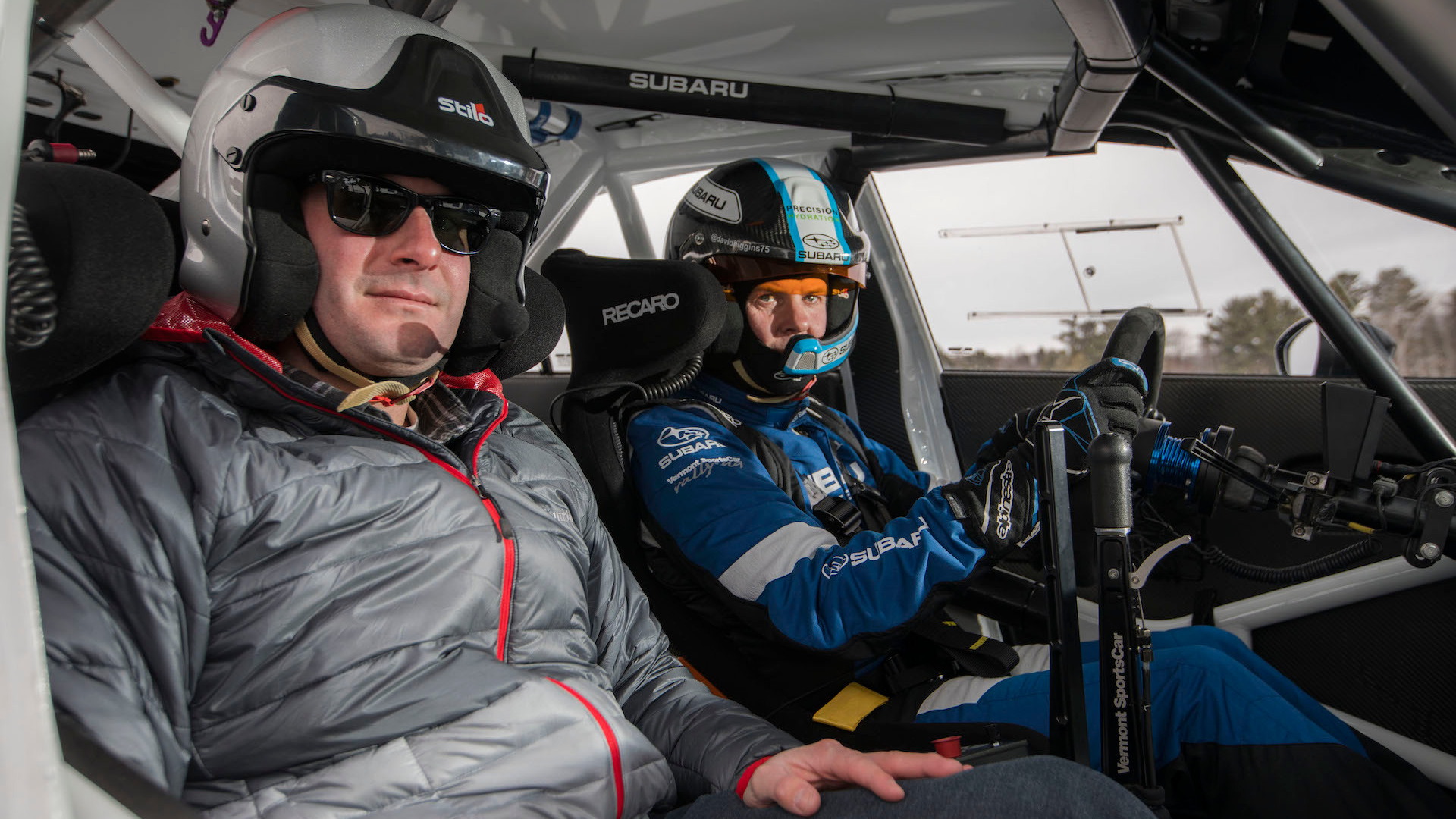 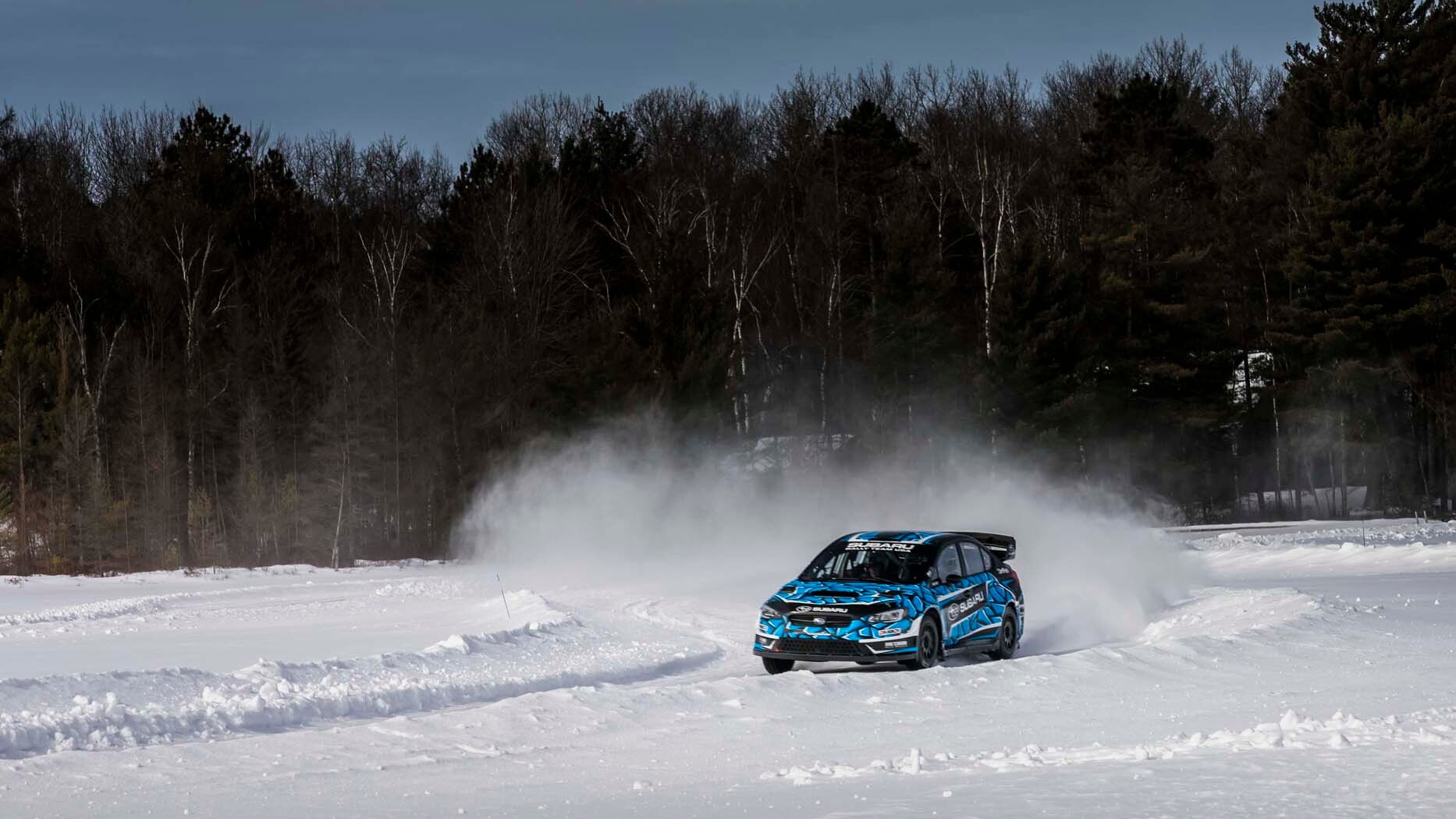 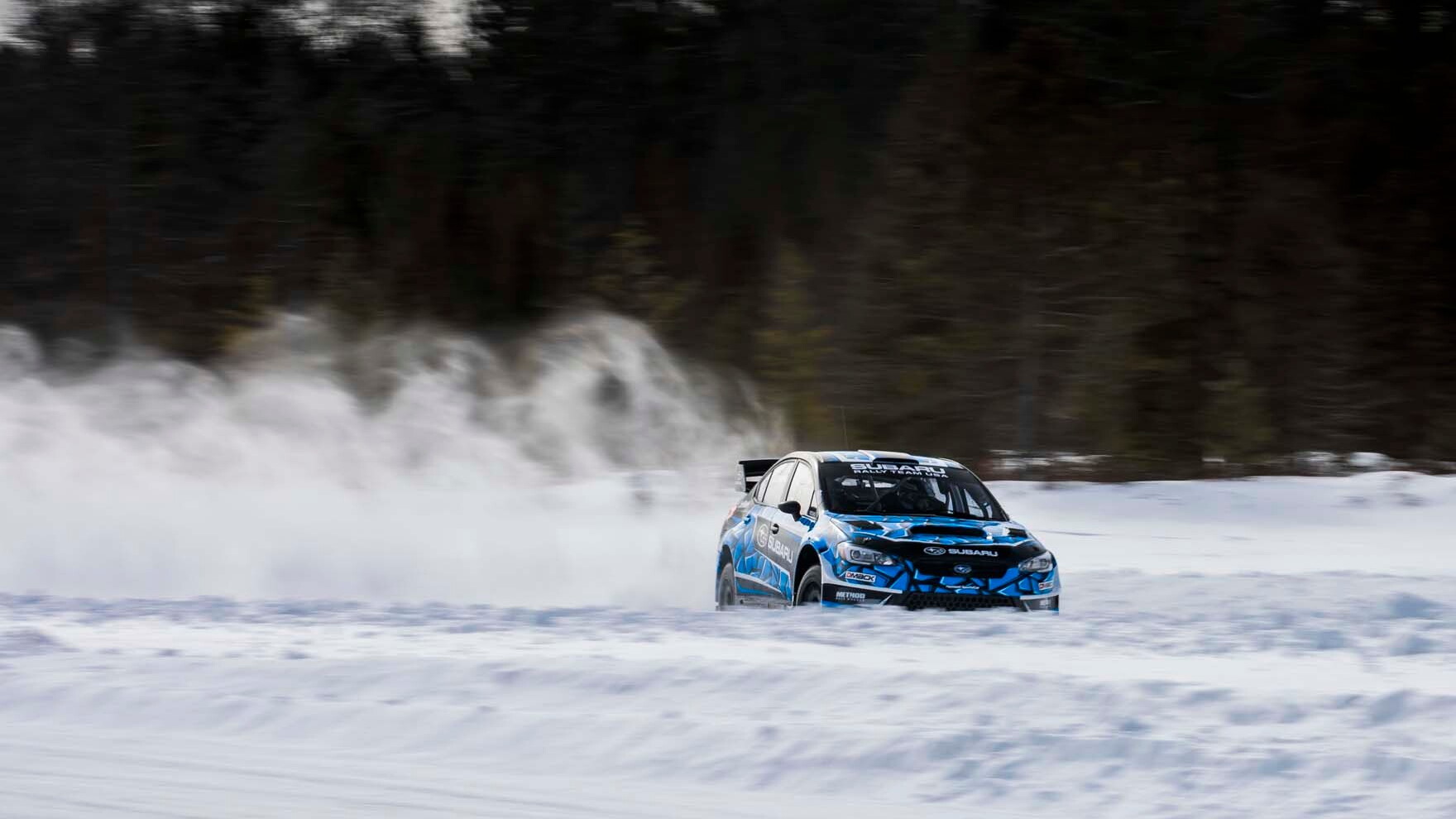 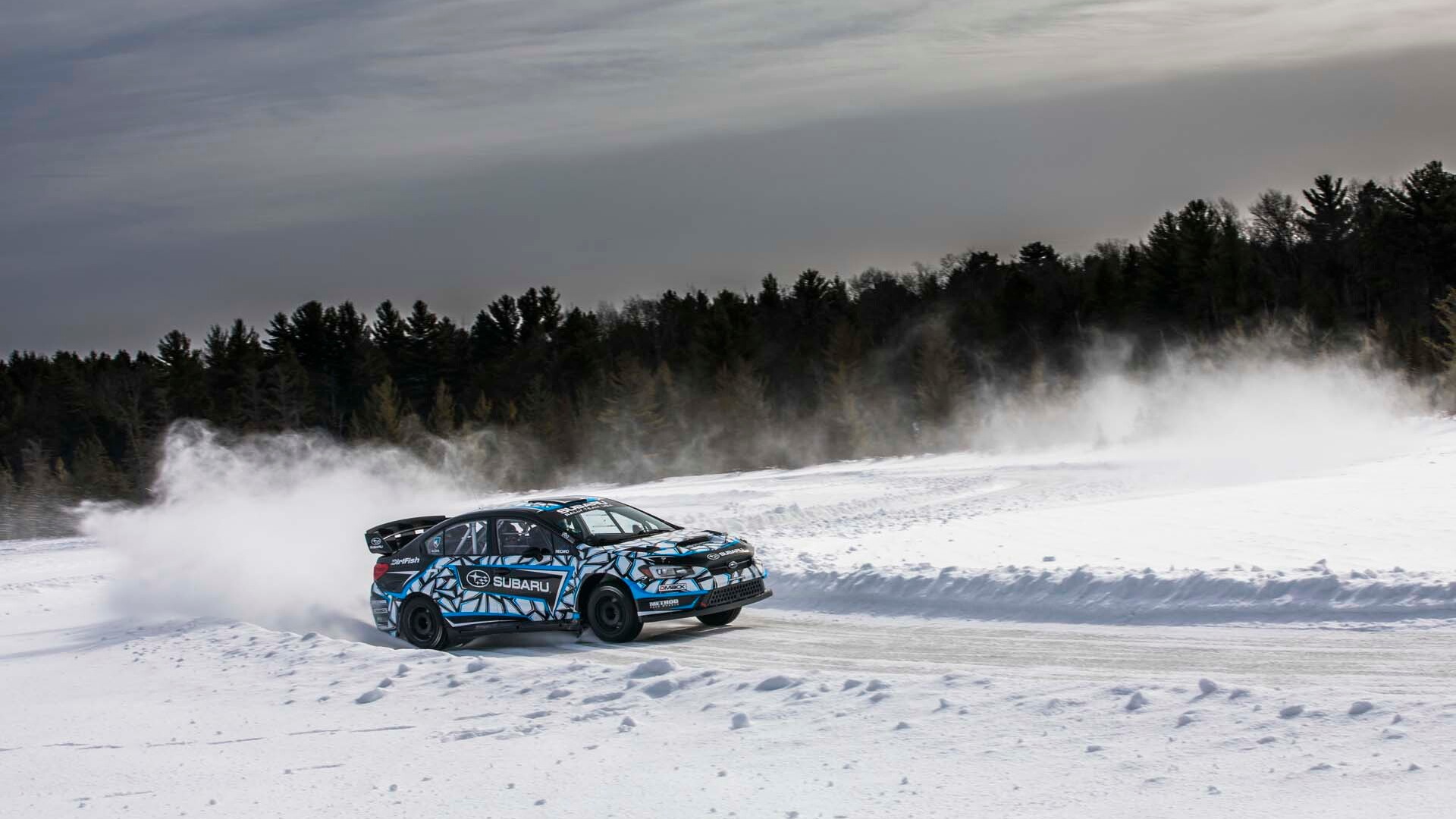 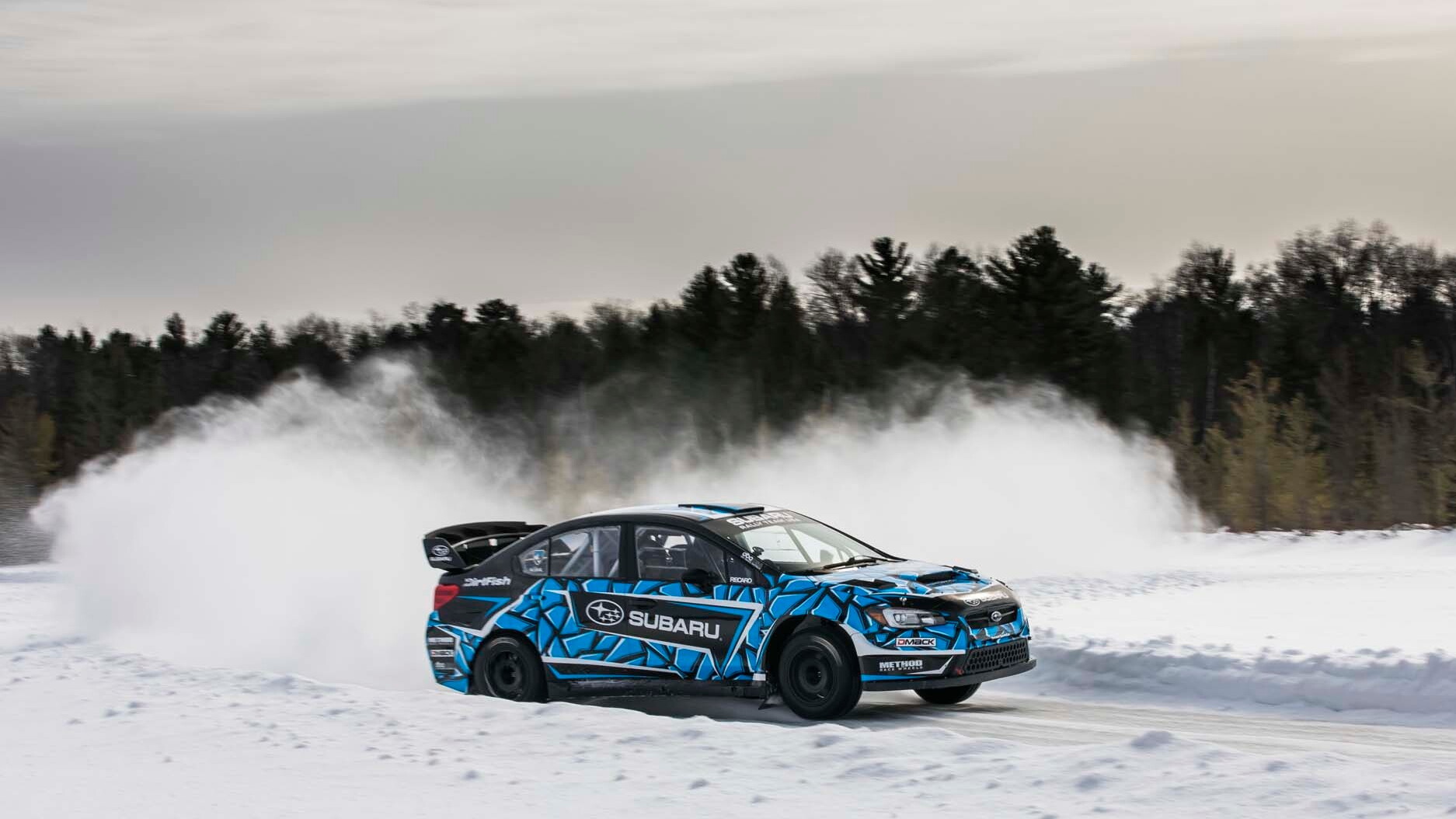 A hand touches my shoulder from behind as I hear, “Are you ready?”

Before I can open my mouth to answer, the calm, crisp 27-degree Wisconsin winter air is violently filled with the Subaru race team’s rally car firing to life.

“Probably large,” I said as I grabbed the helmet from Buffum’s hand. 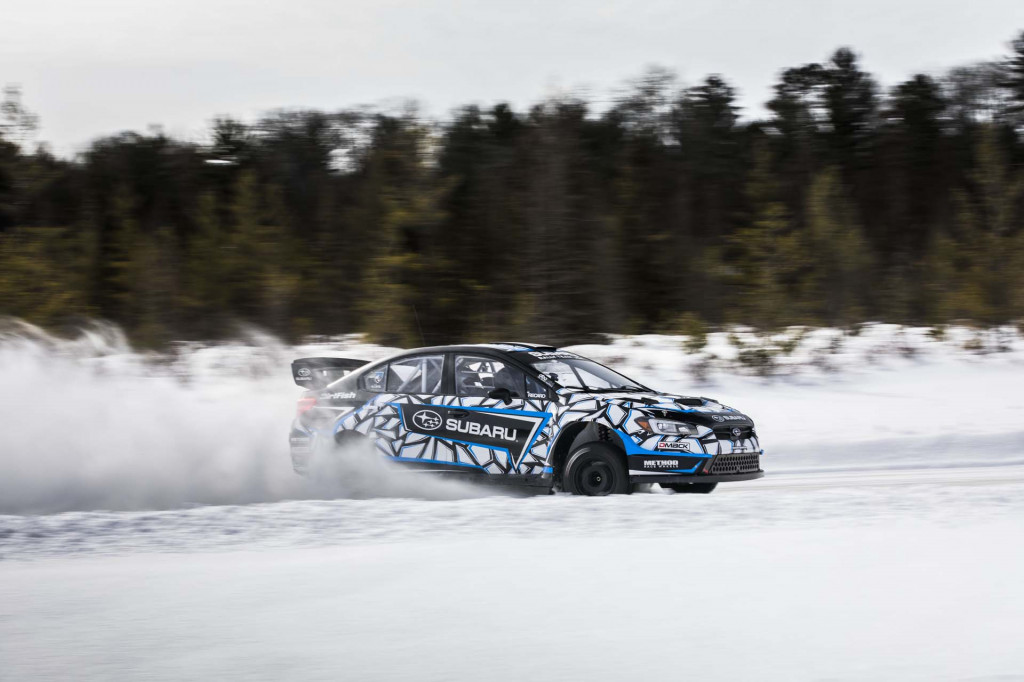 I wasn’t on frozen Dollar Lake in Eagle River, Wisconsin to ride in a rally race car. I came here for Subaru’s 2018 Winter Sporting event, a new winter driving school in its inaugural season.

I’d met David before today, but had only ridden in a car with his brother Mark, and that was on hot tarmac in California.

I look into the car’s completely gutted interior—basically a white roll cage bolted to a shell of a vehicle—and see Higgins strapped into the driver seat. He motions to the passenger seat: “Get in.” 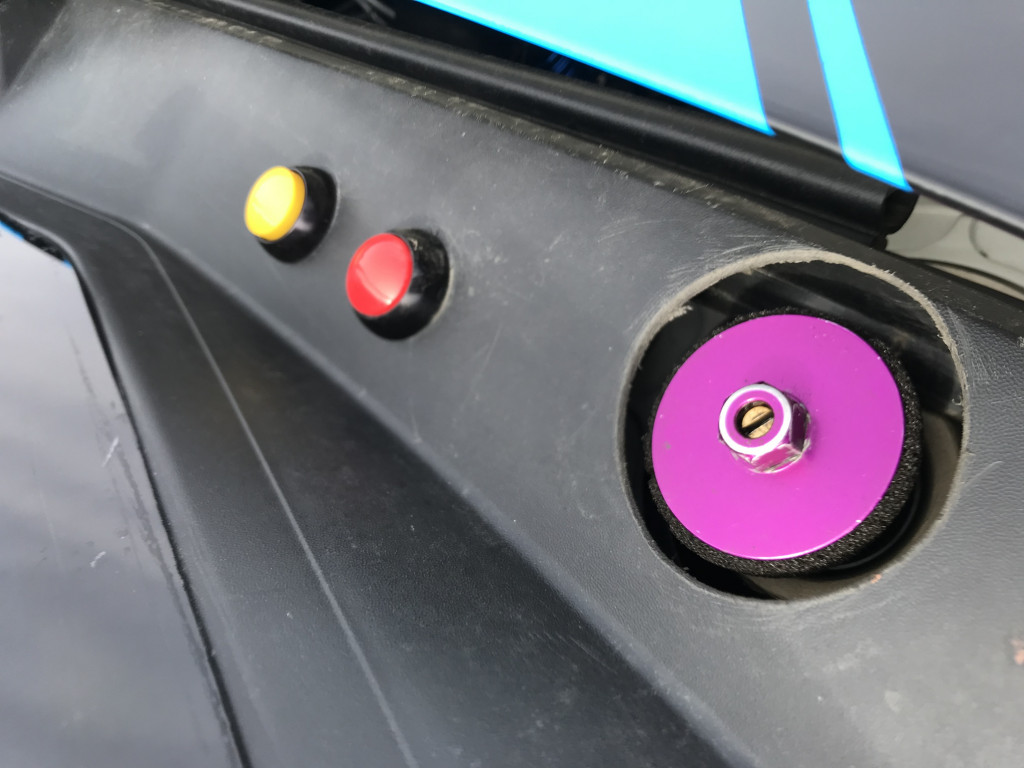 I spot two buttons, red and yellow, next to the top of the front shock on the front cowl below the windshield, but decide not to ask what they are for. I contort my body and slide through the full roll cage and into the passenger seat.

Looking around quickly to get my bearings before strapping in my nostrils are instantly full of partially burned race fuel, my body vibrates in the tight Sparco race seat, and I’m sitting back in the car far enough to be Shaquille O’Neal. Our torsos are near the B-pillars as the seats were mounted in the middle of the car for better weight balance. 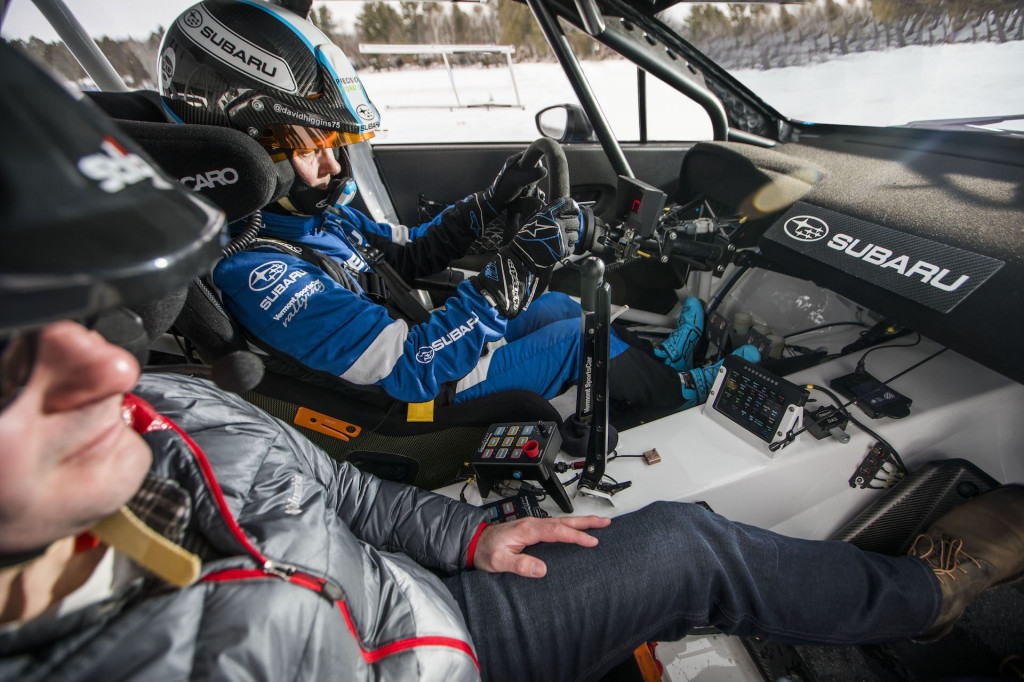 I can see all the wiring in the car, I can see the brake booster’s fluid sitting, vibrating, in a clear plastic reservoir in front of Higgins’ feet, and there’s a massive metal gear shifter and E-brake bar in between us.

Buffum helps strap me in and tighten the five-point safety harness before giving me the thumbs up to silently confirm I was ready for what was next.

Brakes off, hold on

We rolled to the start line.

Higgins prepares to launch as he hits the throttle to build the revs as the car fights its brakes to leap forward. The cabin is suddenly 10 times louder and filled with the turbo spooling, engine revs climbing, suspension springs clunking up and down as it tries to absorb the uneven ice, and a loud thunk each time Higgins banged the 6-speed sequential transmission up a gear as we built speed.

I looked over at the digital display in front of Higgins who’s grabbed the gear shifter and blasted through three gears and 100 mph faster than I can think.

Higgins momentarily let off the throttle and a “Star Wars” sound pierced the cabin as the anti-lag system kept the turbo spooled and ready to pounce.

Suddenly the entire car rolled on its feather-soft suspension setup and rotated like a rehearsed tango. 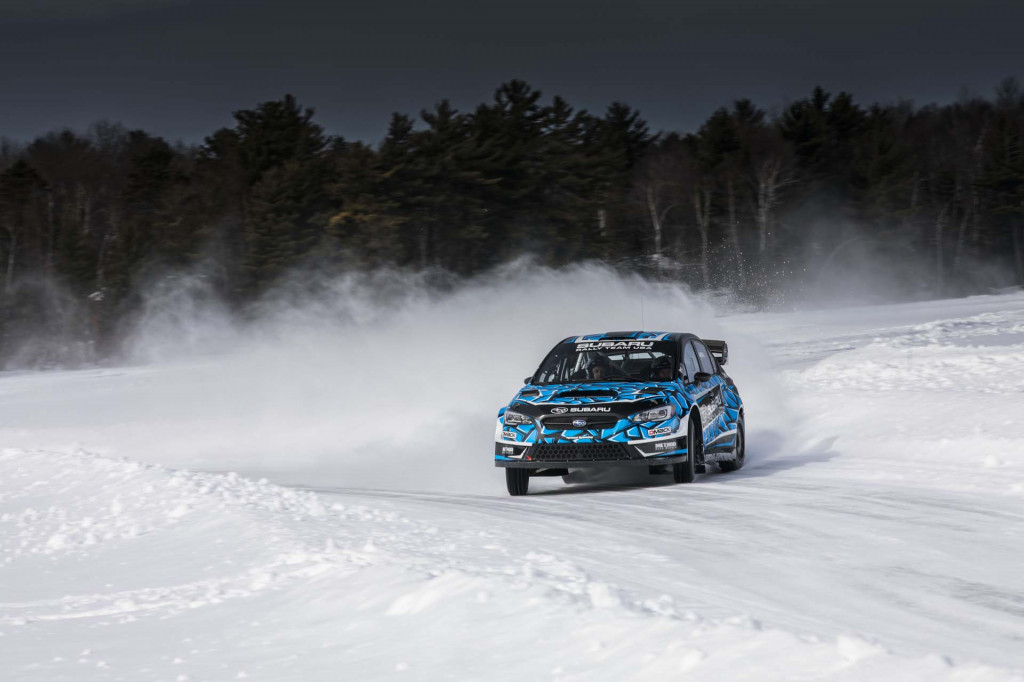 Higgins nailed the throttle again, twisted the steering wheel to dial in some countersteer, as we slid through the first set of corners exactly as choreographed.

Now I realize this is different than any other race car I’ve been in.

Higgins is all business as he looks through the turns, prepares for what’s coming next, and employs all the lessons the Subaru Winter Experience instructors from Flatout Sweden and DirtFish Rally school have been preaching all day.

The WRX pitches and rolls as its suspension groans with the car’s weight shifting. We dance around each corner smoothly like helmet-clad ballerinas in our Subaru slipper. 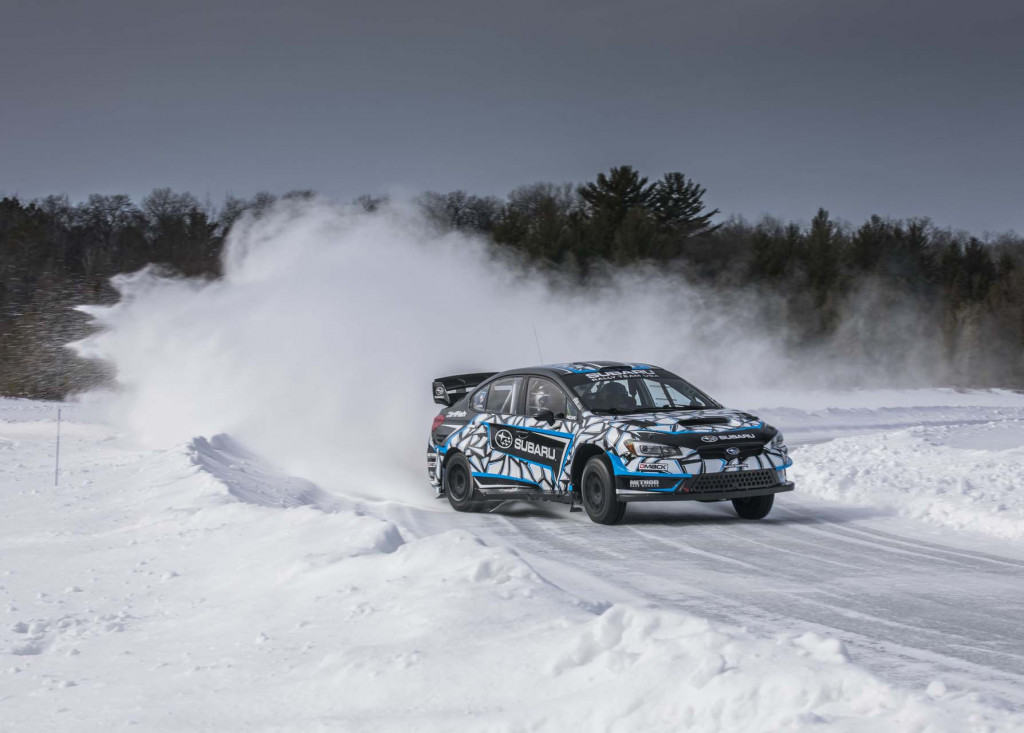 Everytime Higgins yanks the e-brake there’s a loud clunk from under the WRX as the drive shaft disconnects and the rear wheels lock up to slide around each corner.

As the finish line comes into sight Higgins punches the throttle, the high-pitched sound of the engine fills the cold air as the exhaust note screams from the back of the rally car, and 120 mph flashes across the screen.

Suddenly it’s over as quickly as it began.

Reality came back into focus as Higgins hit the brakes hard to end my wild ride.

As we rolled to the staging area, I thanked Higgins for taking me for a hot lap, and told him he was far more serious behind the wheel than his brother Mark was. I couldn’t completely tell, but he might have smiled despite his best efforts.

Buffum grabbed the five-point safety harnesses release coupler and released my body from the seat’s stronghold.

I snaked my way through the safety cage and out onto the ice.

Charlie Gerry, lead technician for the car, popped the hood for me. Higgins commanded 350 horsepower and 480 pound-feet of torque that surged with 32 psi of turbos that fired from a 34-mm restrictor plate. Gerry said the restrictor “basically makes the turbo act like it’s breathing through a straw.” 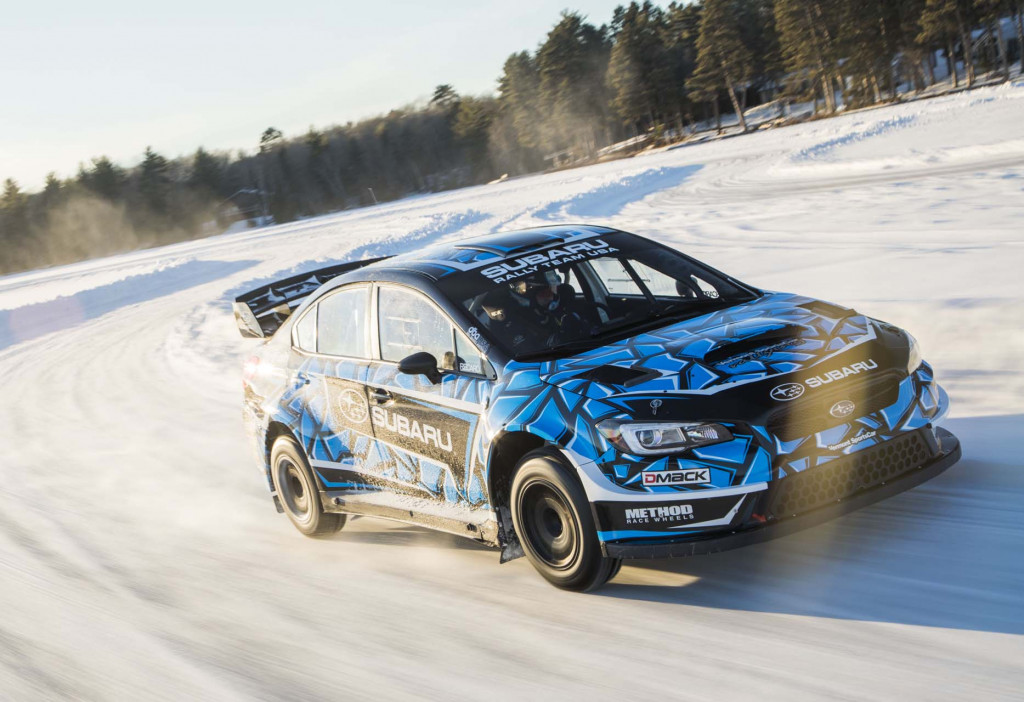 Over beers, I asked Patrik Sandell later what those yellow and red buttons on the front cowl were for.

“The red one is a system kill switch while the yellow one, well you don’t want to be using that,” he said.

He paused and his eyes shifted from me to Buffum and back to me.

“It’s a fire-suppression system for first responders,” he replied.

Then I realized just how dangerous what I had done earlier was.

In a race car at Road America you could run off the track, hit the rumble strips, go across the grass, into the gravel, and maybe hit the wall.

Higgins didn’t have those luxuries. If his WRX would have hit a snowbank faster than 100 mph it would have gone airborne, barrel rolled or tumbled end-over-end multiple times until we stopped—on whatever door or roof or tire gravity decided for us.

Rally drivers do all of that. On gravel through the woods, flat out, on mountainsides, in driving rain or snow, without knowing the course or ever having driven it. The level of insanity is hard to fathom, but riding with Higgins around that circuit on the frozen lake gave me a slight taste, and it was an experience only a dozen or so people get every year.