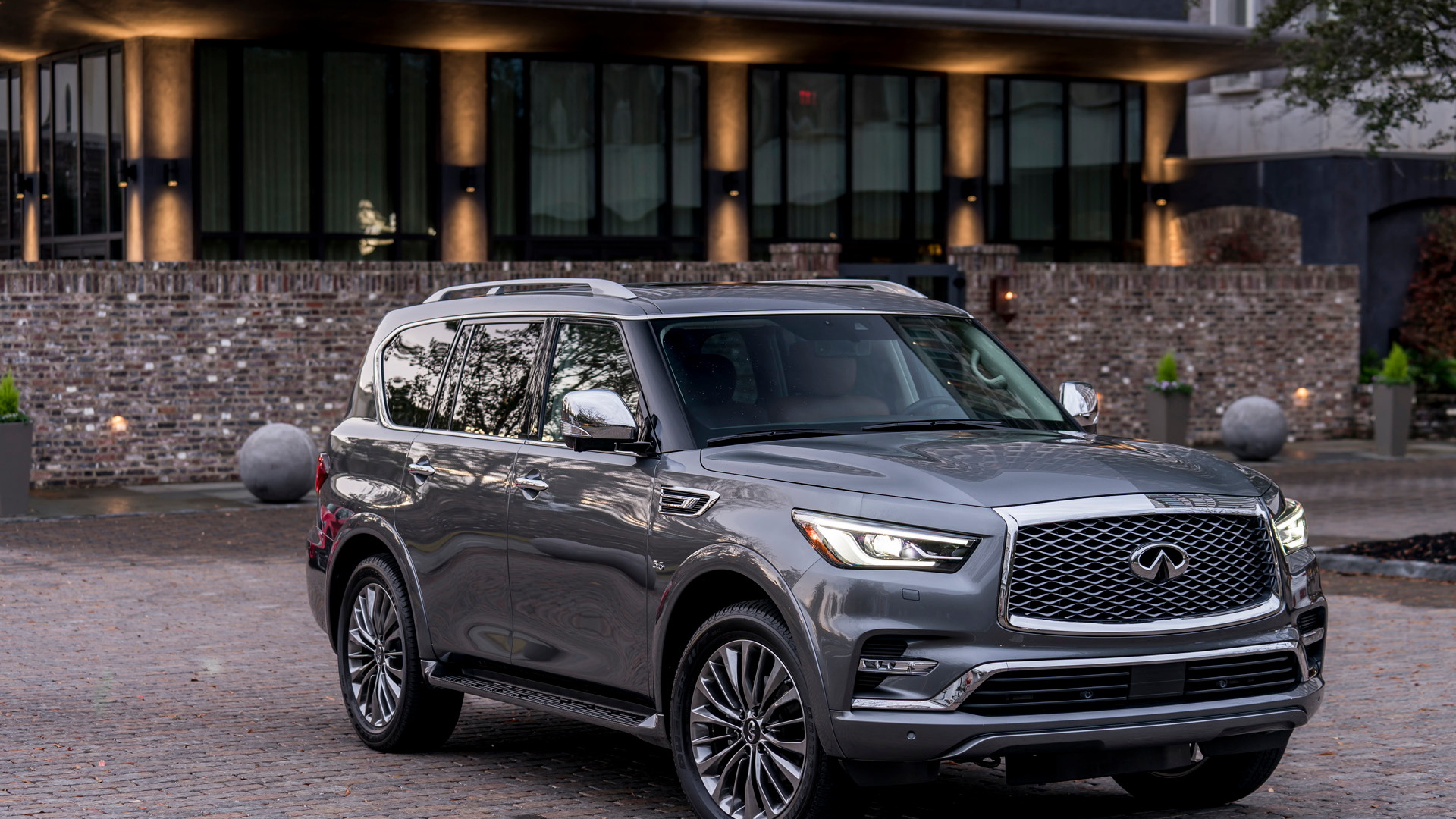 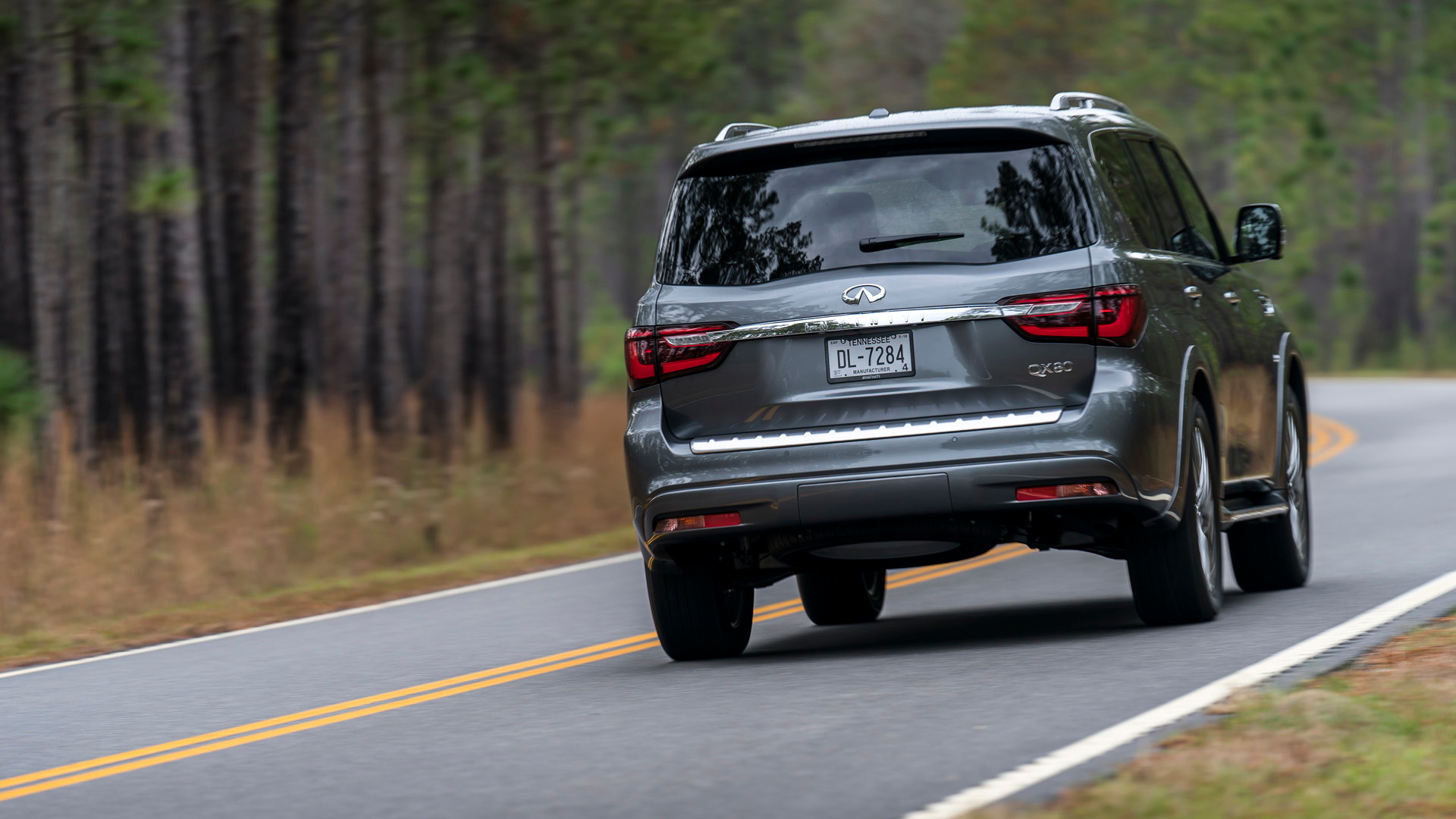 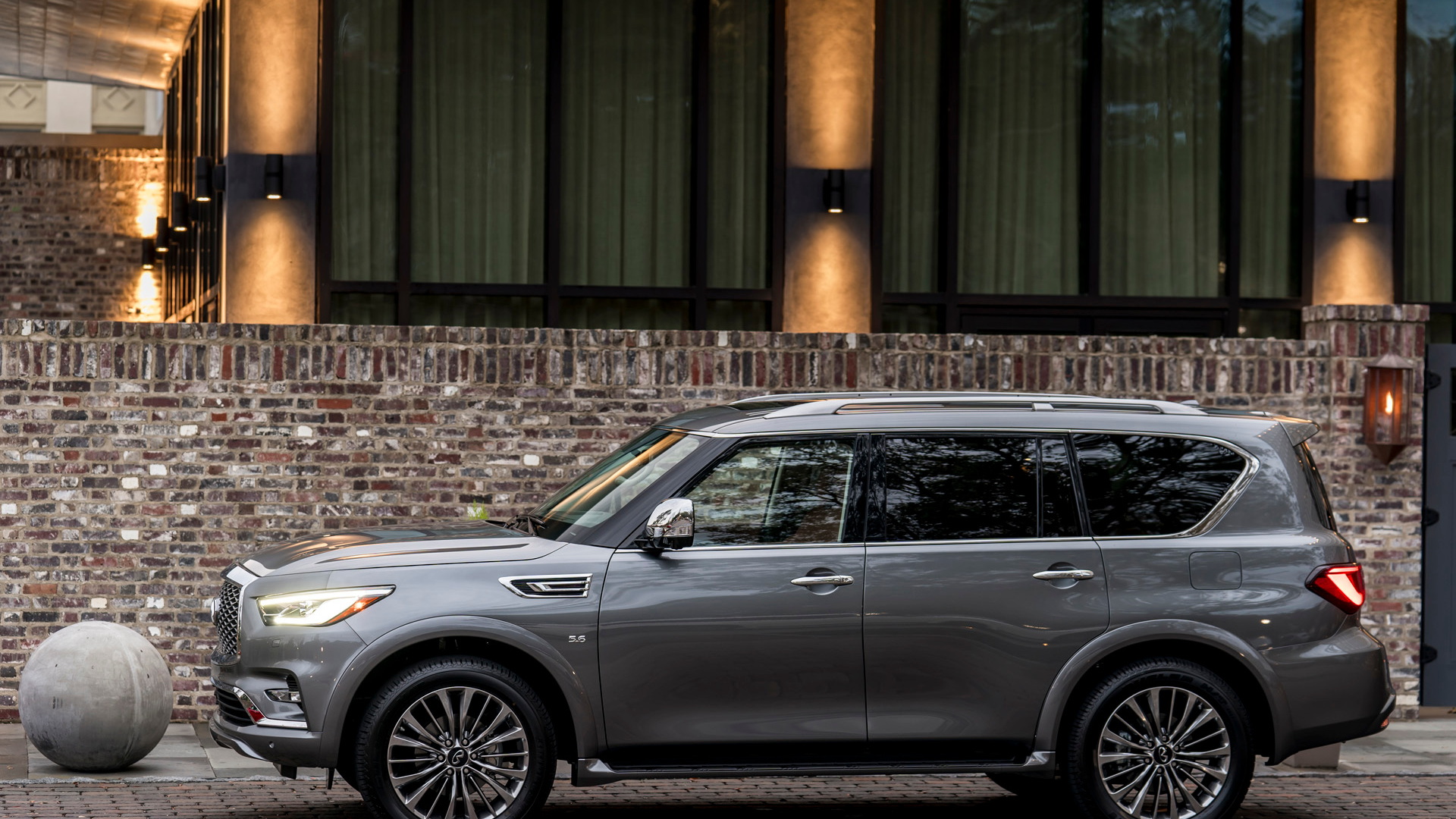 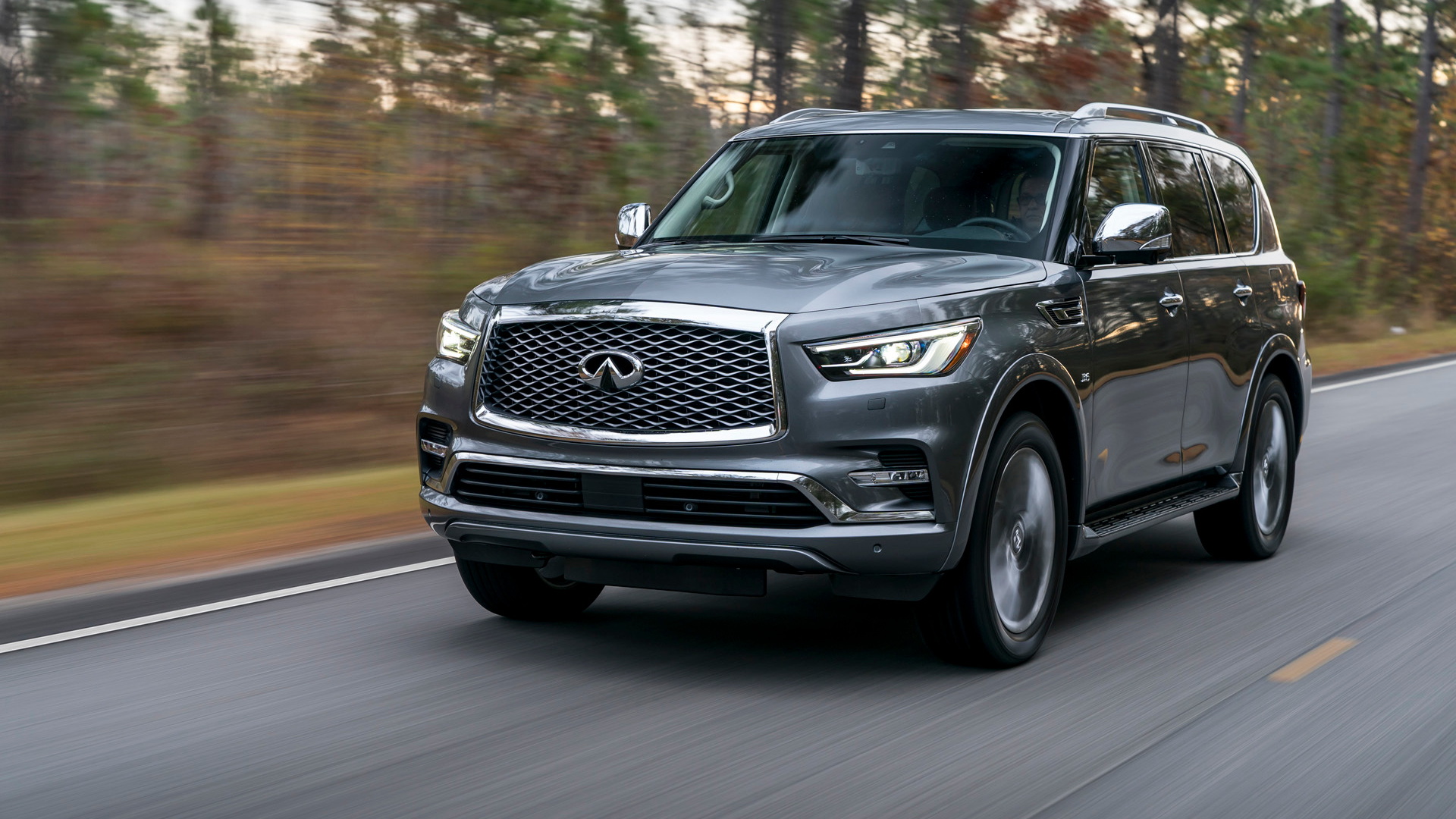 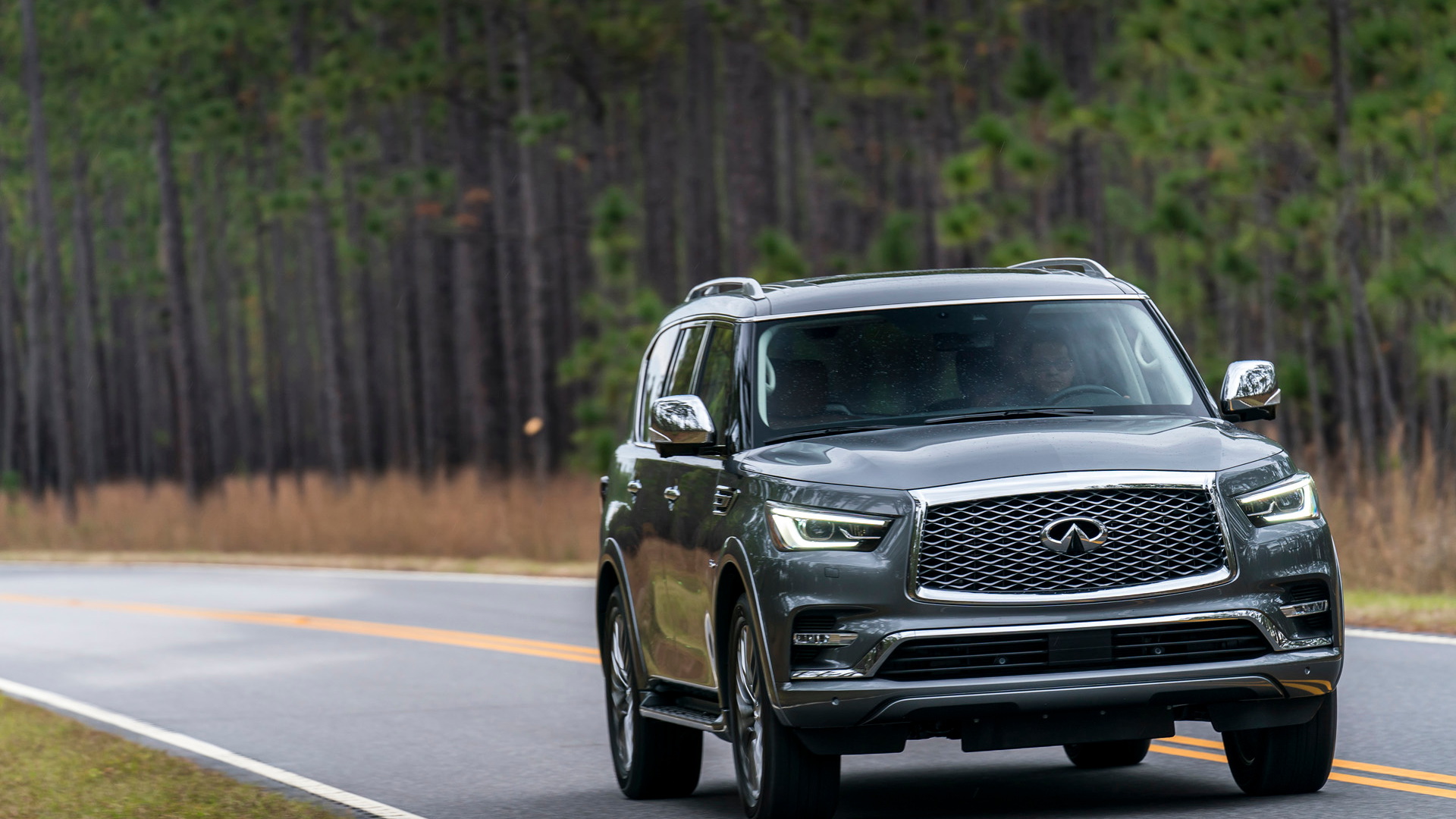 The 2018 Infiniti QX80 is a frustrating vehicle. It's (finally) attractive. There's a charming powertrain moving it along. And this big truck does luxury well, with beautiful leatherwork and a quiet cabin. But these attributes aren't enough to to overshadow the QX80's age.

At the very least, Infiniti's reskinning of the QX80 has been a success. In a bid to address the most egregious styling decisions of last year's QX80, Infiniti's designers figured it was easier to just restyle everything from the A-pillar forward. That means new quarter panels, a new hood, a more attractive grille, revised headlights clearly inspired by the lovely QX80 Monograph concept, and a new front bumper.

The 2018 model still has last year's model's underbite, but some design orthodontia means it's less severe. The restyled rear bumper sits beneath a new tailgate that includes stylish new LED taillights, which once again draw inspiration from the Monograph.

There are still some bizarre styling decisions here, though. The side grilles, for example, serve no real purpose. But with a new design, they look more like a factory item and less like a 99-cent AutoZone special. The mirrors are oddly shaped, unsuccessfully melding the vertical nature of a Ford Super Duty's side-viewers with the design aesthetic of a car's mirrors. The designers made at least one thoughtful touch—the standard sidesteps are now larger, allowing easier ingress and egress.

The QX80 looks better inside than out. Even for an older design, Infiniti's leather work is worth praising. Beautiful quilted upholstery envelops the seats while Infiniti's wave-form stitching adorns the door panels. This touch is a winner—the wave stitching is the kind of useless design flourish that reminds both driver and passenger that they're riding in a luxury vehicle.

The leather and stitching isn't just beautiful, it's soft and pleasant too. The semi-aniline hides also wear a stain resistant coating that Infiniti says will prevent denim-wearing drivers and passengers from staining the lighter leather options (and will likely be a boon to parents worried about small children ruining the cabin with juice boxes). Dark wood trim complements the leather and stitching, although Infiniti could be more liberal with the distribution.

But handsome leather can't hide (no pun intended) the effect of age on the QX80's cabin. The center stack, for example, is a mess of cheap-feeling buttons and painted plastic trim that's hard to justify in a vehicle that starts at $65,000. The infotainment system operates on a single-screen version of the operating system Infiniti has rolled out on the Q50, Q60, QX60, and the upcoming QX50, but the absence of a lower screen doesn't make it any easier to figure out. The display in the instrument cluster is small and monochromatic at a time when Cadillac and Lincoln will happily sell all-digital clusters to willing consumers.

The QX80's traditional gauges sit behind a steering wheel that hasn't been updated since the Bush administration. The chunky, four-spoke tiller wears some lovely contrast stitching on the airbag cover and a thin strip of wood trim around the rim, but the overall design feels ancient, particularly sitting next to newer models in Infiniti's own showrooms.

Fortunately, the QX80's age doesn't impact its main job of transporting lots of people and things. This is an absolute workhorse of a truck that will happily schlep seven people with room to spare. The front seats are broad and welcoming, although they're firm enough that the La-Z-Boy effect provided by the Lincoln Navigator's thrones is less pronounced. If anything, I'd like more support on the lower cushion and heavier side bolstering—a luxury SUV's seats should feel like a cow-hide bear hug.

The second row, particularly with a set of captain's chairs, is a comfortable place to while away a road trip, thanks in no small part to a larger pair of displays for the available rear-seat entertainment system, two more USB outlets (three with the entertainment system), an HDMI input, and a 120-volt power outlet. There's plenty of space, too, with 41 inches of legroom. The third row is neither as comfortable nor as well appointed—on the legroom front, its 28.8 inches isn't suitable for anyone but children and there aren't any USB outlets on offer. Frankly, buying a QX80 with a second-row bench and keeping the third row stowed is smart call—there's only 16.6 cubic feet with the third row up.

All QX80s feature a 5.6-liter, naturally aspirated V-8 that may or may not run on whale oil. It might be more efficient that way. Burning gasoline, it returns 14 mpg city, 20 highway, and 16 combined in rear-wheel-drive trim. Subtract a point from each rating for the four-wheel-drive model. Those numbers aren't disappointing on their own—in fact, they're roughly equal to the Lincoln Navigator, Cadillac Escalade, and Mercedes-Benz GLS550.

But each of those vehicles outguns the QX80, which offers only 400 horsepower and 413 pound-feet of torque, and by significant margins in some cases (both the GLS and Navigator boast 50-horsepower advantages, while the Escalade is up 20 ponies). The Infiniti doesn't feel flat-footed, though. There's enough low-end torque to set occupants back in their seats, while the V-8 is all too happy to deliver power for passing maneuvers. And the 8,300-pound tow rating is nothing to scoff at, either. The QX80 can out-haul the GLS550 and tie with the Escalade, while the Navigator boasts a negligible advantage at 8,400 pounds.

Part of that is thanks to the 7-speed automatic transmission. While Cadillac and Lincoln are fitting 10-speed automatics to their trucks and Mercedes-Benz is using a 9-speed auto, the QX80 maintains a slick-shifting seven-speed that's quick to engage off the line and almost eager to execute downshifts for passing maneuvers. It's not as quick as the Ford/GM 10-speed on upshifts, although we make that statement as pedantic auto writers—this gearbox will satisfy most owners.

The QX80's ride and handling dynamics will also satisfy. Even though this is a traditional body-on-frame SUV, it doesn't suffer from the poor secondary ride characteristics or the detached reactionary behavior common in this design. Infiniti softened the dampers at all four corners by 30 percent, while the double-wishbone front and rear suspension rides on Bridgestone tires with softer sidewalls. The result is almost too much comfort. On undulating roads in the South Carolina countryside, there was too much vertical motion, giving the QX80 a disconnected feel. I didn't notice this sensation as much in Charleston, where more traditional road imperfections replaced the subtle rise and fall of the tarmac. On those bigger bumps and potholes, the QX80 responds well, isolating both driver and passenger from the worst sensations.

That said, the QX80 is not an agile car. It's extremely wide and difficult to place on the road, and while Infiniti's Hydraulic Body Motion Control does a fantastic job of keeping the body flat through the corners, it doesn't free this big truck from the laws of physics. Softening the dampers has also created more dive under hard braking and squat under wide-open throttle. But despite its size, Infiniti has honed in on a good steering setup—there's a right-sized dead zone on center, which feels suitable for a vehicle this big. Likewise, the way the steering weights up is what I'd expect from a full-size three-rower.

Prices for the 2018 Infiniti QX80 start at $65,745 for the two-wheel-drive model, including a mandatory $995 destination charge. All-wheel drive adds a hefty $3,100 to that price. The $2,900 Driver Assistance Package is a smart buy, adding forward collision warning with pedestrian detection, front and rear automatic emergency braking, adaptive cruise control, blind-spot monitoring, lane-departure warnings with active lane control, and Infiniti's Distance Control Assist system. The Theater Package costs $2,450 and adds a pair of 8.0-inch displays to the back of the front headrests, an extra USB outlet, an HDMI port, a 120-volt outlet, heated, outboard second-row seats, and a pair of wireless headphones. A $5,700 Deluxe Technology Package requires both of those packages plus a $2,800 22-inch wheel package, but adds ventilated front seats, Hydraulic Body Motion Control, active front lights, a rear-view mirror camera, the semi-aniline upholstery, and a 15-speaker Bose audio system. An eight-passenger seating option costs $250 while a wifi hotspot drives the price up $450. Grab every feature, and the QX80 can crest $80,000.

It's difficult to recommend the 2018 Infiniti QX80, not because it's a bad vehicle but because it's in the unenviable position of being surrounded by newer, roomier competitors that offer more power, comfort, and technology. That's an inevitable fate for most vehicles, but it's rare that it happens the year of a mid-cycle update. The 2018 QX80 deserved a redesign, but as good as this update is, it's going to spend the next several years playing second-fiddle to newer competition.