Mercedes AMG’s Nico Rosberg has continued his winning streak with a top podium finish yesterday at the 2016 Formula One Bahrain Grand Prix. That’s five wins in a row for the German if you include the three final races of the 2015 season.

Rosberg didn’t put a foot wrong at the Bahrain International Circuit. He had a clean start, a clean Turn 1 and then the race was his to control.

The same wasn’t the case for fellow Mercedes driver Lewis Hamilton who, like at the previous race in Australia, suffered a poor start and then in Turn 1 came into contact with Williams’ Valtteri Bottas. This caused some damage to the front wing of Hamilton’s car which cost him performance for the remainder of the race. In the end, Hamilton finished third, more than 30 seconds behind the leader.

Splitting the two Mercedes drivers was Ferrari’s [NYSE:RACE] Kimi Räikkönen. The Finn ran a clean race and finished 10 seconds behind the leader. Unfortunately for fellow Ferrari driver Sebastian Vettel, a technical issue meant the multiple world champion driver had to retire after only a few corners.

Red Bull Racing’s Daniel Ricciardo had an uneventful run and finished fourth. Behind him was Romain Grosjean driving for Haas. His fifth place finish, one better than in Australia, shows that the American outfit is a credible player even in this debut season. Unfortunately for Haas’ other driver, Esteban Gutiérrez, the Mexican had his race end prematurely for the second straight time, this time due to a brake issue.

WATCH: Four reasons why the rotary engine is currently dead

Finishing sixth was Toro Rosso’s Max Verstappen. The Dutch youngster managed to just edge out Red Bull’s other driver Daniil Kvyat. It was then Williams duo Felipe Massa and Valtteri Bottas in eighth and ninth, respectively.

And rounding out the top ten was McLaren reserve driver Stoffel Vandoorne who made his debut. He sat in for Fernando Alonso who was sitting on the sidelines on the recommendation of doctors following his violent crash two weeks ago in Australia. McLaren’s other driver Jenson Button was forced to retire due to trouble with his power unit.

Thanks to his latest win, Rosberg’s tally in the 2016 Drivers’ Championship extends to 50 points. Hamilton is second with 33 points and Ricciardo is third with 24 points. In the Constructors’ Championship, Mercedes leads with 83 points versus the 33 of Ferrari and 30 of Red Bull. The next race on the calendar is the Chinese Grand Prix taking place in Shanghai in two weeks.

Hit the next page for the full results for the 2016 Formula One Bahrain Grand Prix. 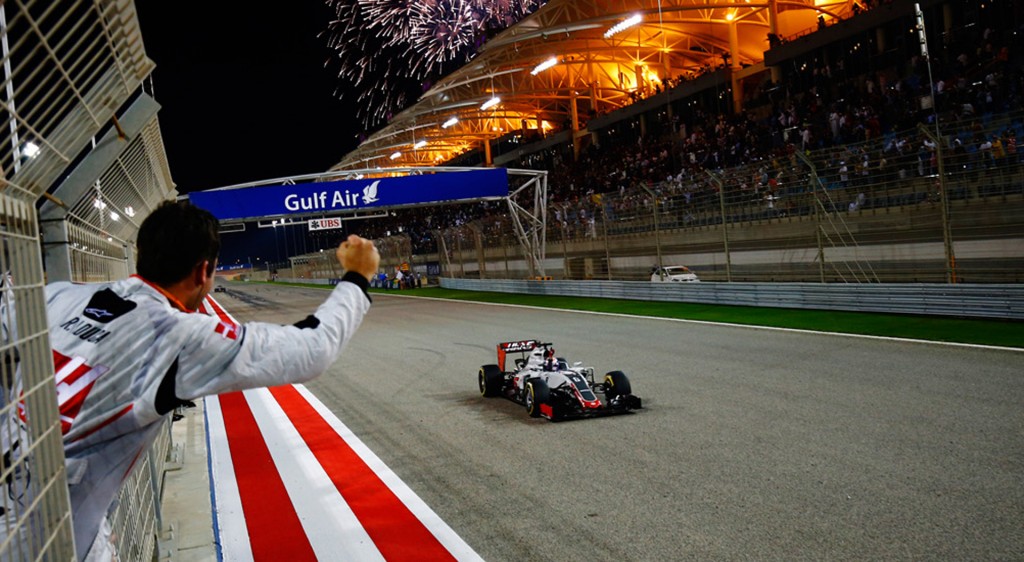 Haas’ Romain Grosjean at the 2016 Formula One Bahrain Grand Prix

Below are the full results for the 2016 Formula One Bahrain Grand Prix: