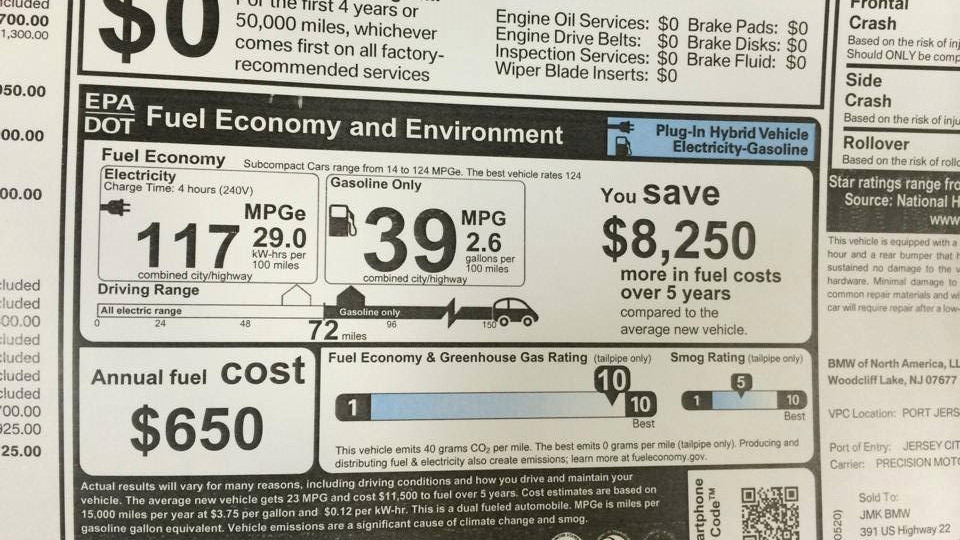 3
photos
The 2014 BMW i3 is quite unlike any other car BMW has produced in its history, and the same can be said of its efficiency figures. Those have now been revealed for the i3's optional range-extended model, and like its all-electric brother it's one of the most-efficient cars on the roads.

The EPA's window sticker carries figures of 117 MPG-equivalent for the car on pure battery power, 39 mpg combined once running on its twin-cylinder gasoline generator, and an electric range of 72 miles. By way of comparison, those electric numbers are a little lower than the lighter, all-electric i3, which hits 124 MPGe and has an 81-mile electric range. They're higher than the leading range-extended car on the market though, Chevrolet's Volt--which returns 98 MPGe and 37 mpg combined on its four-cylinder engine.

What the i3 REx offers that its all-electric counterpart doesn't is reduced range anxiety, as combined range for the battery and engine is 150 miles. If previous plug-in cars can be used as a metric, few i3 drivers will regularly venture into gasoline-burning territory, but as a "get-me-home" option it could prove attractive to some. So will the fuel bills--the EPA sticker calculates an annual fuel cost of $650, based on 15,000 miles per year at $3.75 per gallon and $0.12 per kWh of electricity.

BMW has already announced the pricing and performance of its range-extended i3. The i3 REx starts at $46,125, or $3,850 more than the battery-electric version. That price includes a mandatory $925 delivery fee, but doesn't take into account any local or national incentives or tax rebates that may be available to buyers. Power comes from a 170-horsepower, 184 lb-ft electric motor driving--as with all BMWs--the rear wheels. The 0-60 mph performance is in the seven second range, and if range isn't a concern it'll hit 93 mph flat out.