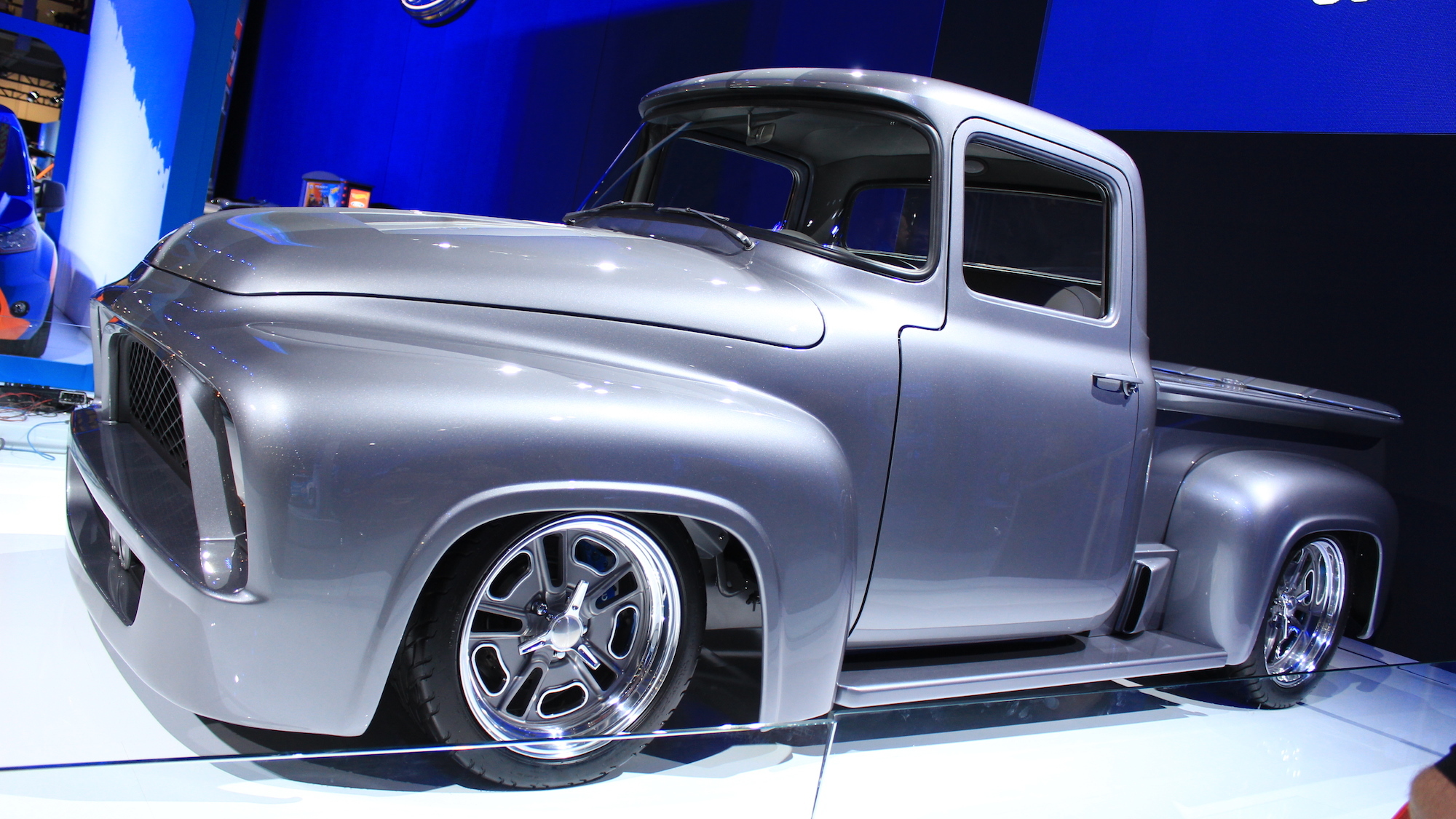 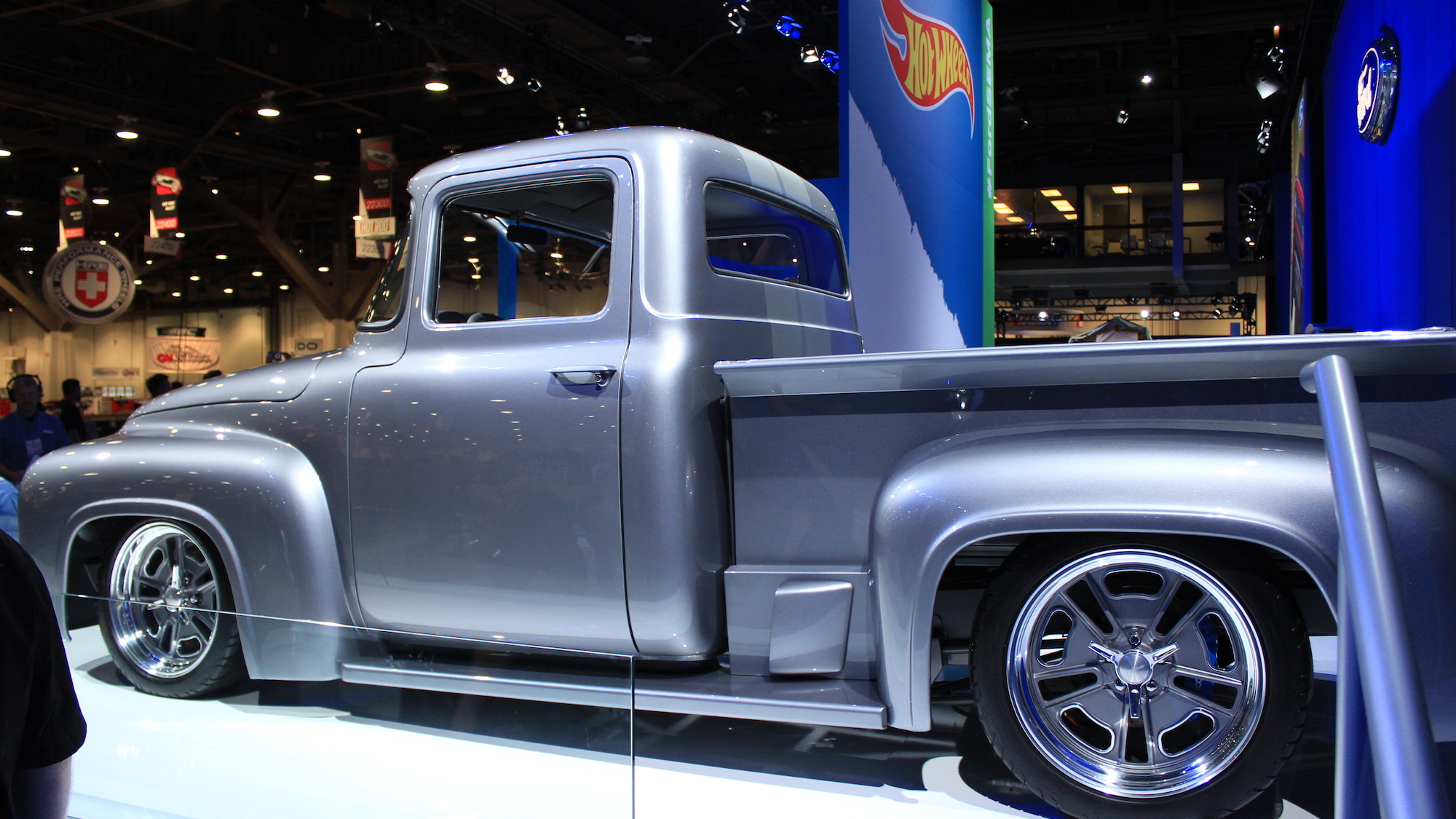 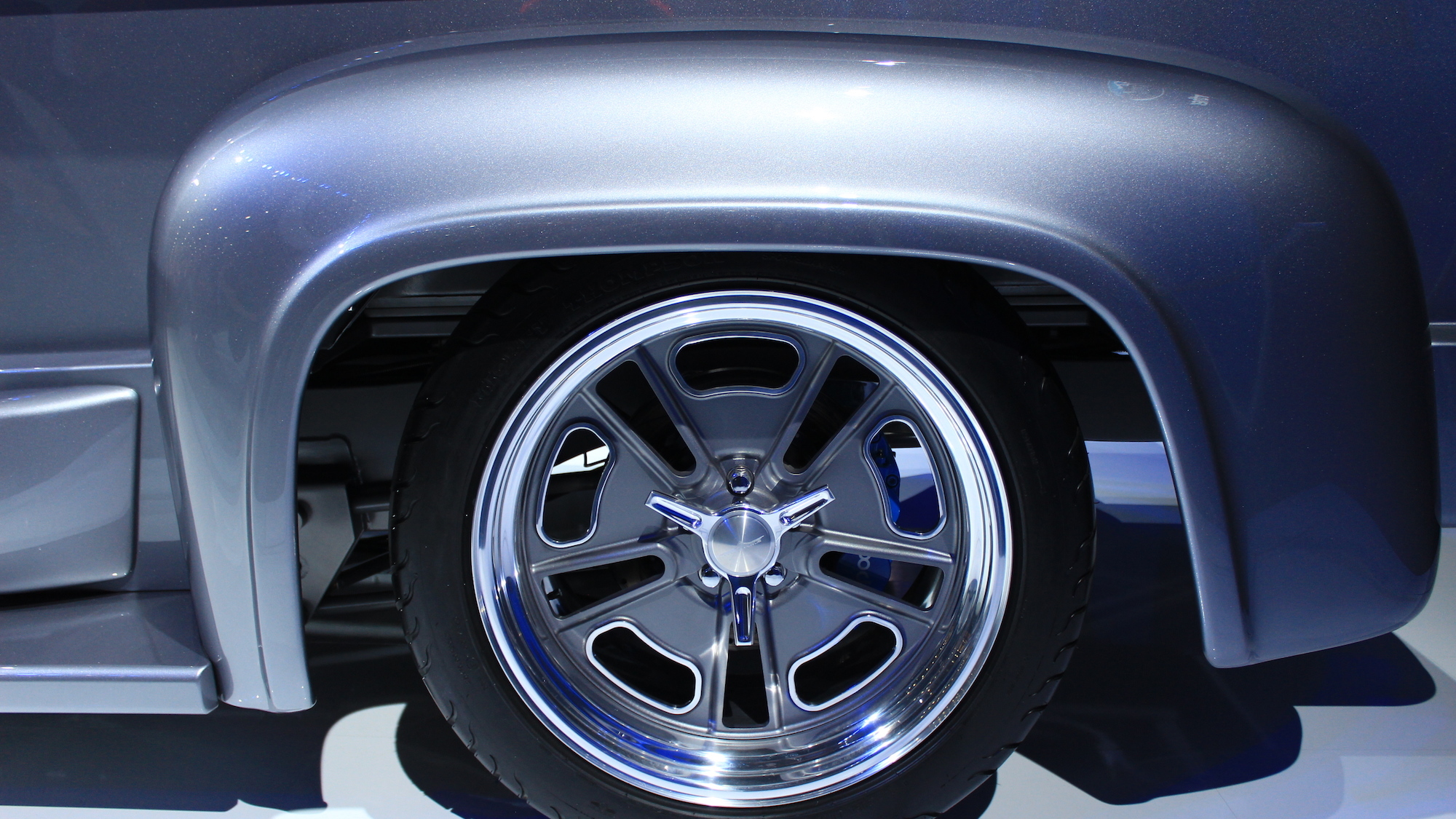 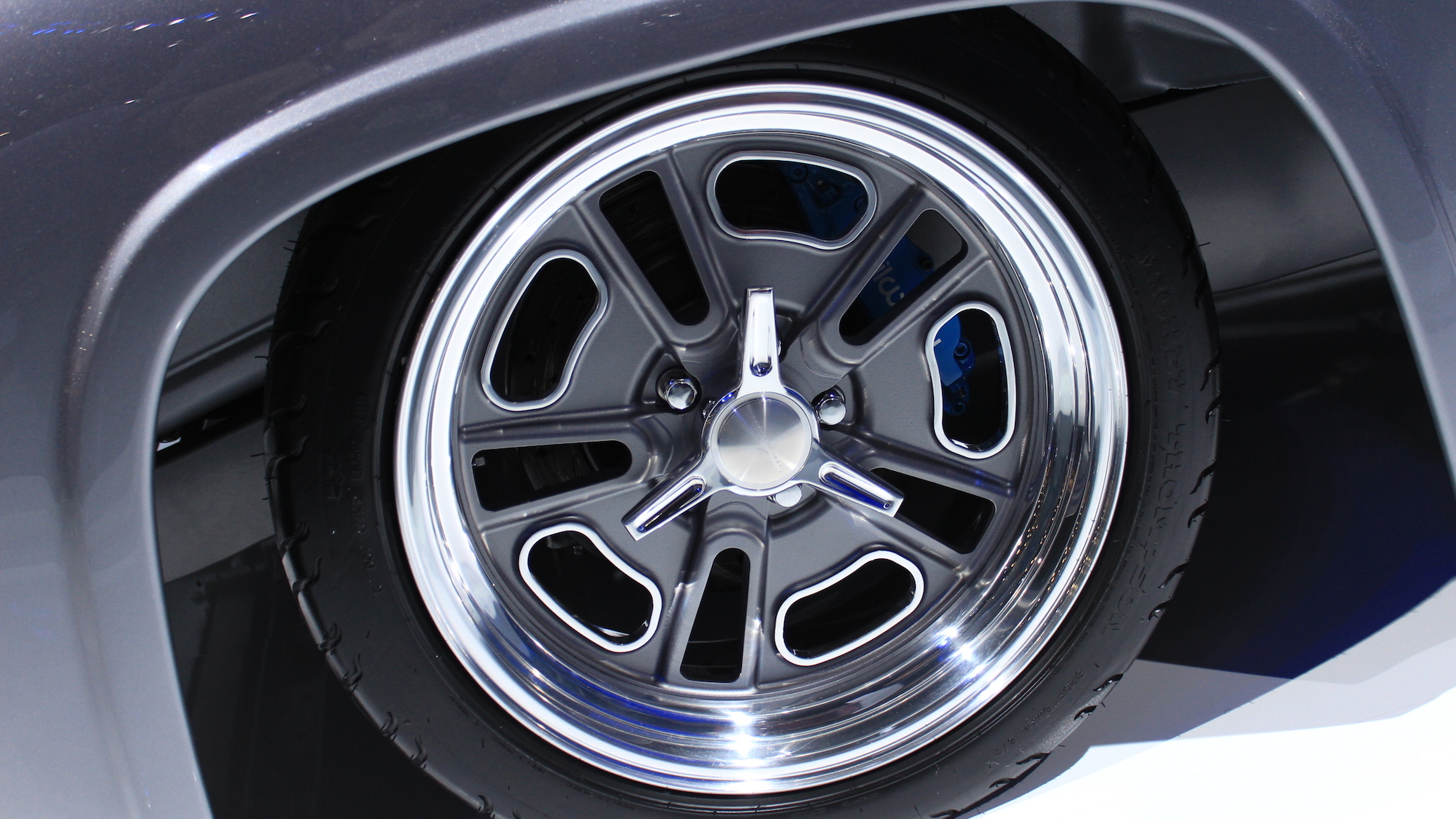 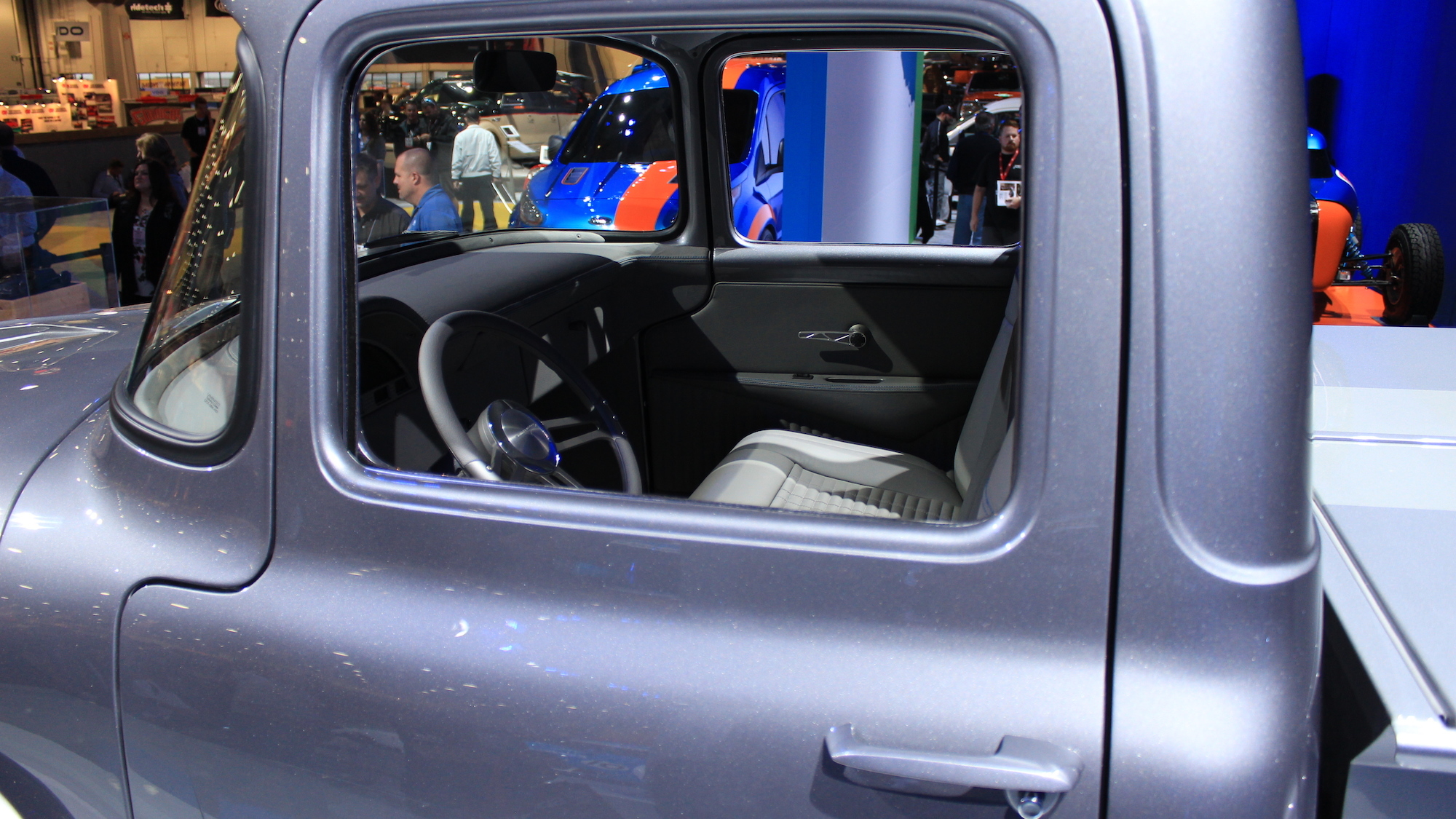 12
photos
The Ford truck line has grown in many ways over the past half-century, but legendary KISS bassist Gene Simmons’ custom 1956 F100 brings the best of the past and the present together in one beautiful show truck--with a little added spice. To make it even sweeter, the special one-off will be auctioned for charity in 2014.

Unveiled at the 2013 SEMA show in Las Vegas, the ‘Snakebit’ truck was a collaboration between Simmons, his wife Shannon Tweed, and Ford, and it is styled to salute another aspect of Ford’s history: the Shelby Mustangs. A badge on the grille gives a direct nod to the high-performance muscle cars, but the Snakebit F100 also honors the legendary Shelbys in other ways.

Perhaps the most impressive homage to the Shelby Mustangs is the 550-horsepower Ford Racing supercharged V-8 engine under the hood. Displacing 5.4 liters, and backed by a six-speed manual gearbox, the engine should give the rear-drive resto-mod pickup all of the punch of its sportier cousins—not to mention a healthy dose of driving fun.

Extensive modifications were made to give the 1956 Ford F100 its new look: the wheelbase was lengthened five inches, a billet machined floor mimics a wood pattern, and 18-inch front wheels tuck up under the fenders, while 20-inch rear wheels help apply all of the 550 horses to the ground. The wheel designs were also inspired by the Shelby Mustangs.

Inside the Snakebit F100, a handmade interior features two-tone leather, a custom leather-wrapped dash, and a contoured bench seat from Glide Engineering designed to suggest the Shelby interior style.

Next year, the Snakebit F100 will be auctioned for charity at a Barrett-Jackson event. The proceeds will go toward construction of a children’s hospital in Tweed’s hometown of Saskatoon, Saskatchewan, Canada. Tom Foster, president of Saskatoon’s Industrial Machine & Manufacturing originally conceived the idea for the custom truck and charity benefit. Foster also named the project “Wheels of Dreams.”

“The Wheels of Dreams project symbolizes how people can come together to meet the needs of our children and families by raising much needed funds for the new Children’s Hospital of Saskatchewan,” said Brynn Boback-Lane, president and CEO of the Children’s Hospital Foundation of Saskatchewan. “Just like the hospital, this concept car project started as an idea and a desire to do something better for our community.

“What began as a grassroots idea, the volunteers and supporters of Wheels of Dreams have turned into a major international fundraiser opportunity that will ultimately benefit our foundation and the children of Saskatchewan who require the services and care of a hospital,” Boback-Lane added.