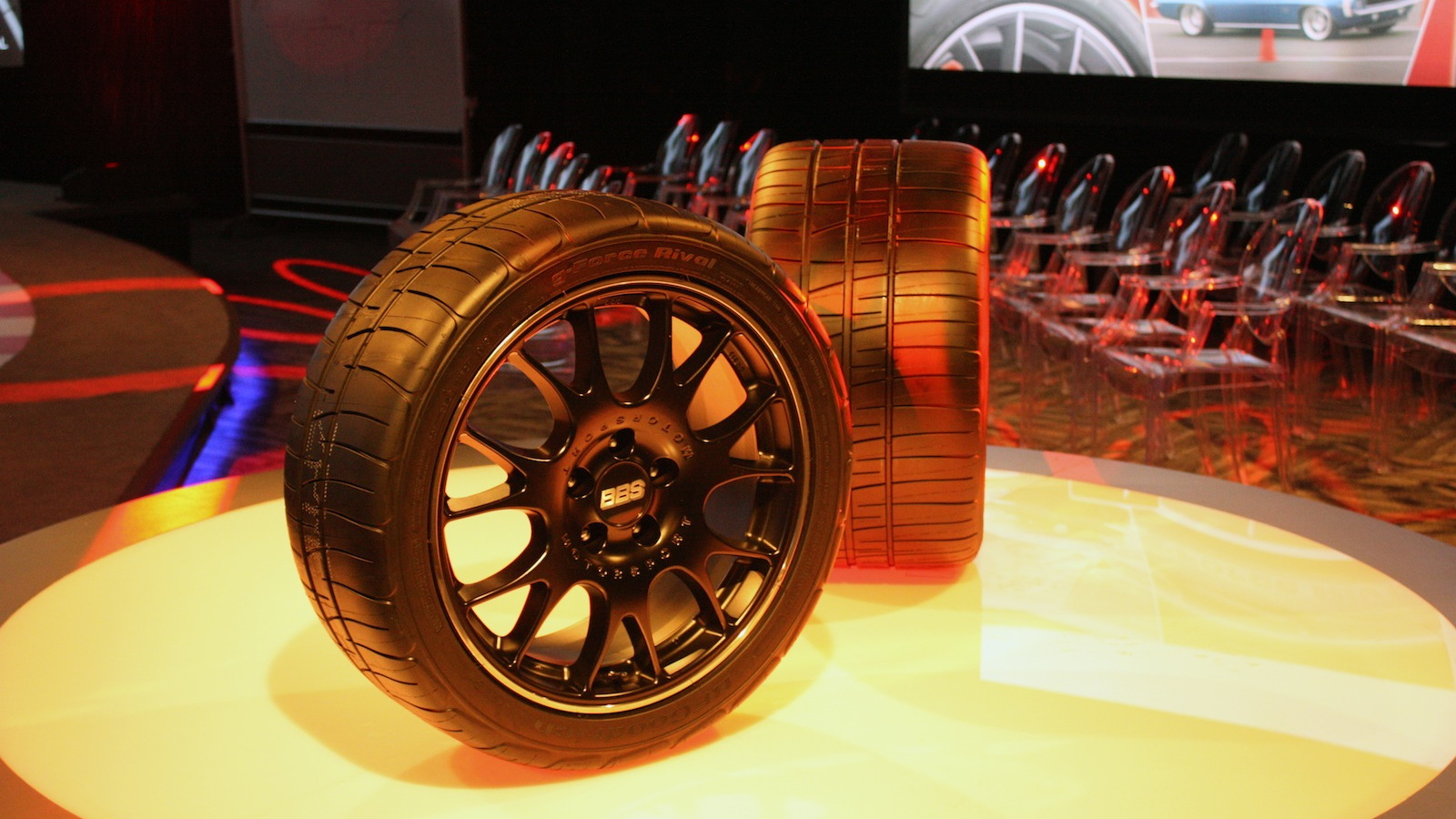 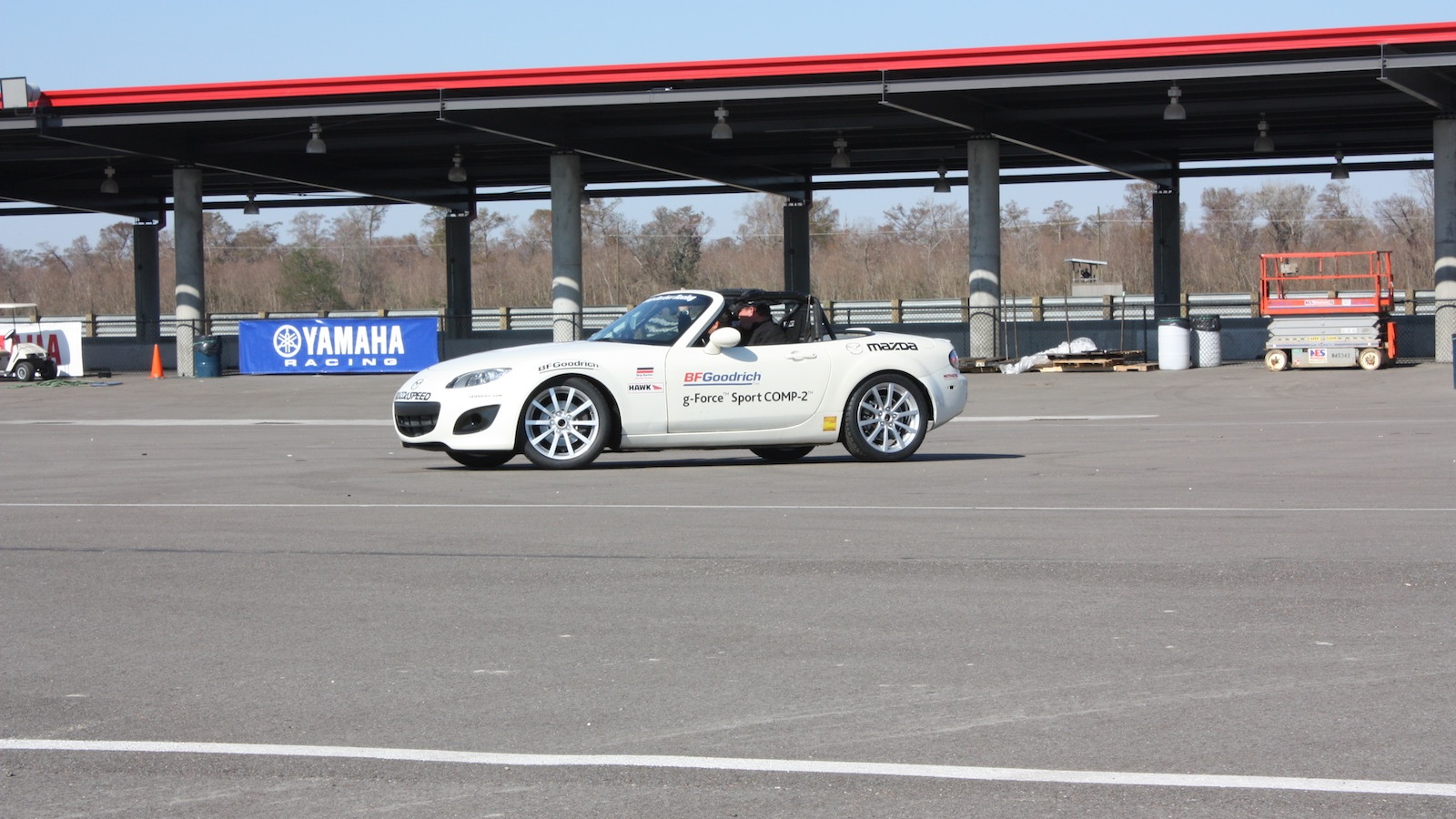 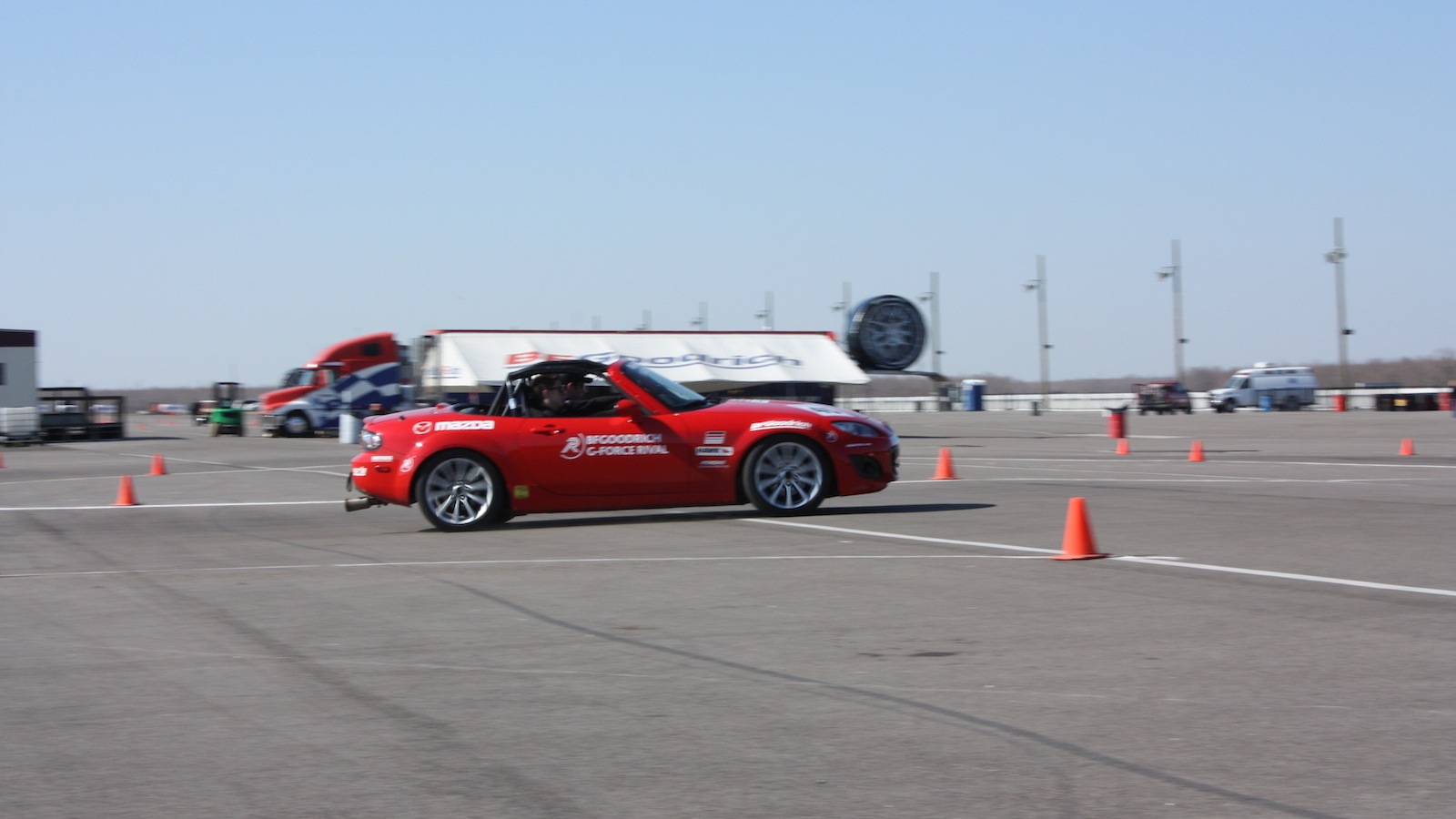 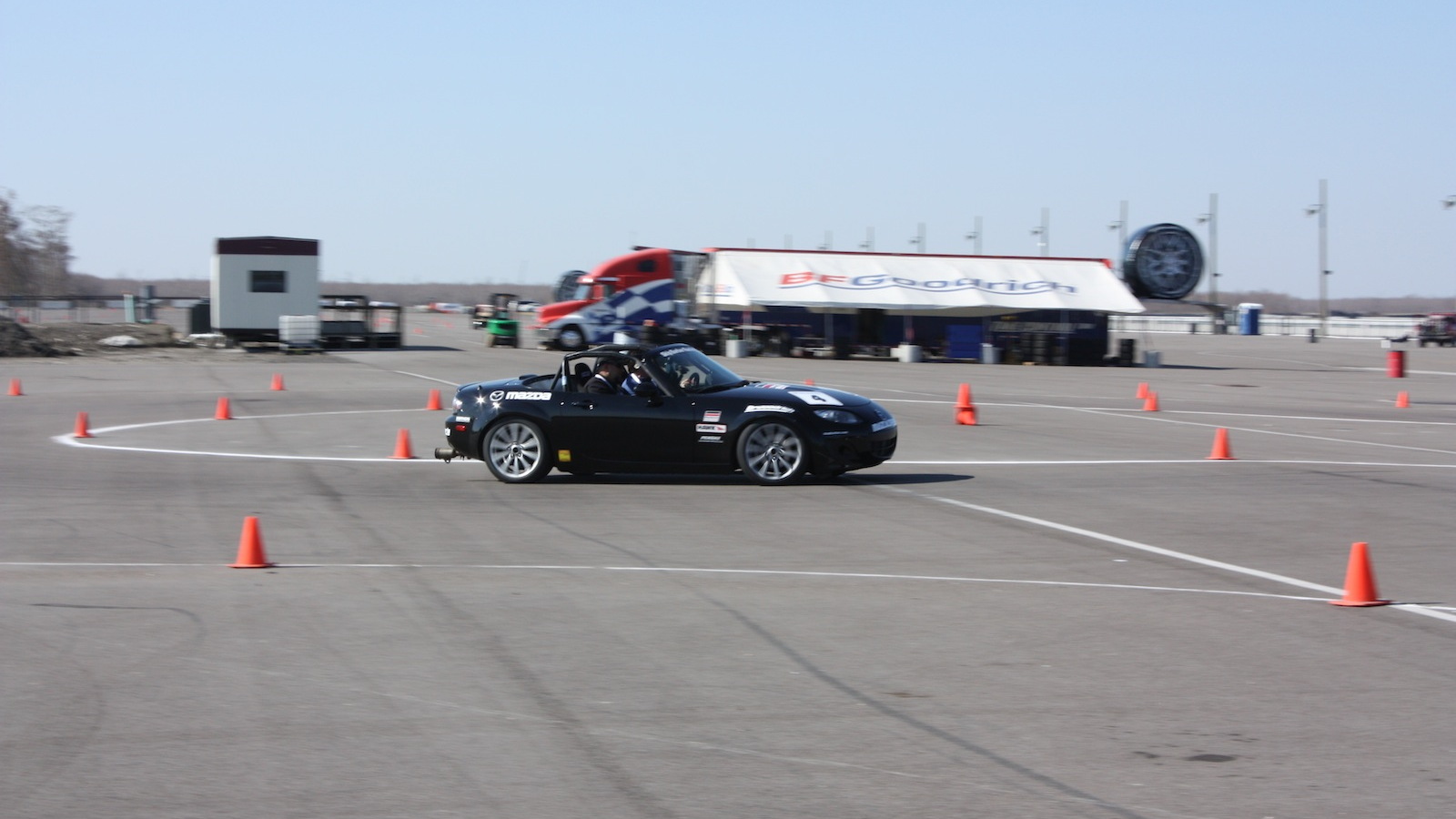 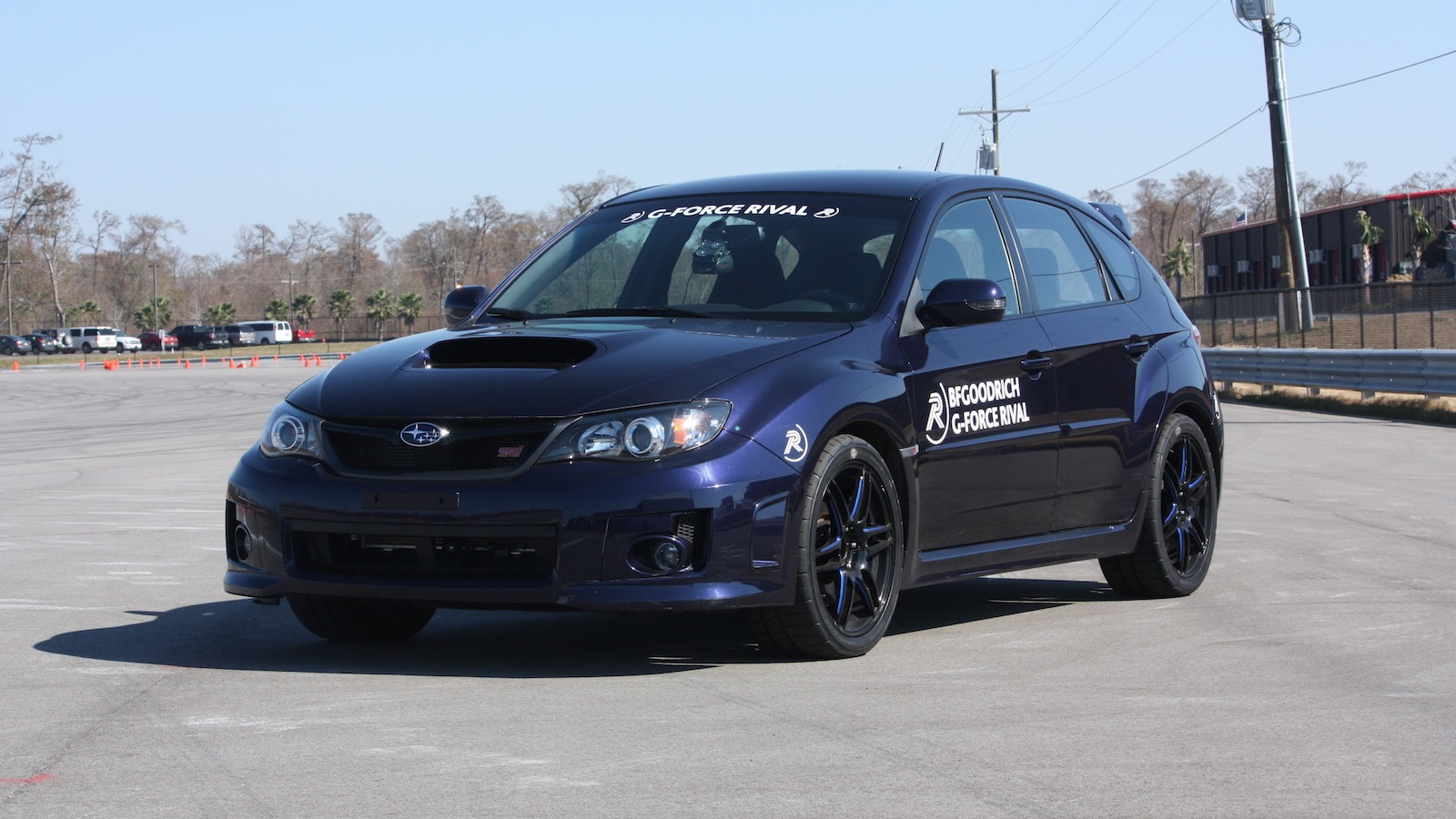 14
photos
If you track your car on a regular basis, or spend weekends killing cones in autocross competition, you know how important a component tires are in your overall car setup. Choosing the right ultra-high performance tire can shave seconds off your lap time, or mean the difference between a first-place trophy and no trophy at all.

The ultra-high performance tire category is a competitive one, with manufacturers like BF Goodrich, Toyo, Dunlop, Hankook and Falken all delivering solid products to consumers. Launch a new tire into this segment, and “good enough” simply won’t cut it.

Enter the new BF Goodrich g-Force Rival, which is designed to bridge the gap between the brand’s street-focused g-Force Comp 2 and it’s DOT racing tire, the g-Force R1. With a Uniform Tire Quality Grade (UTQG) rating of 200, the tire is ideal for competition series that require treadwear ratings over 140.

BF Goodrich designed the g-Force Rival to deliver the highest level of dry grip in its street product line, while still delivering reasonable damp weather performance. It’s not a rain tire, and BF Goodrich recommends its g-Force Comp 2 for use in the wet.

As a tire that you can drive to the track, earn a trophy and then drive home, the g-Force Rival is, well, without rival (forgive us for that). There’s plenty of science behind its design, and BF Goodrich is acronym-happy here.

We won’t quiz you on any of that, but here’s what you need to know: the Rival is designed with a very stiff sidewall for crisp turn-in and exceptional steering response. Its blocks and ribs are designed with lateral draft angles, which prevent them from rolling over at high g-loads, maximizing the contact patch and extending tire life.

All the hype in the world is meaningless unless a manufacturer can back it up with performance, so BF Goodrich invited us to the New Orleans Motorsport Park to play tire test engineer for a day.

Our job was a thankless one: driving a Mazda MX5 Cup car, a Subaru WRX STI, a Ford Mustang FR500 and an E46 BMW M3, we had to benchmark the g-Force Rival against other tires from Goodrich (including the g-Force Comp 2 and the g-Force R1) and the competition.

First up was a skidpad test featuring the Mazda MX5 Cup. If performance is all about numbers, here’s what you need to know: we pulled 1.05 g on the g-Force Comp 2 tires, 1.16 g on the g-Force Rivals and 1.2 g on the g-Force R1s. In feel, the Rivals were much closer to the R1 racing tires, except that they were more forgiving at the limit.

Next, we hopped into the Subaru WRX STI to autocross the Rivals against the Hankook Ventus R-S3 and the Toyo Proxes R1R. BF Goodrich even stacked the deck in the competition’s favor by having us drive the g-Force Rivals first, before we learned the layout of the course.

Next it was off to drive the Mustang FR500 racer on the full NOLA circuit, comparing the g-Force Rivals to the Falken RT-615K. With a front straight that’s nearly a mile long, the circuit allowed us to experience the differences between the tires at high speed, where the Rival immediately presented itself as more confidence-inspiring.

Not only did it provide a higher level of grip, but the Rival was much more progressive when it did break loose. Though we only had two laps on each tire, the Falken felt to us like it was starting to give up some grip, though we’d need more consecutive laps to be sure.

The final event was a long-course autocross in the BMW E46 M3, and this event really solidified the Rival’s advantages over its closest competitor, the Hankook Ventus R-S3. The Rival not only had better lateral grip, but it had better longitudinal grip (under braking), making it an easier tire to drive fast.

When the Rivals lost traction, it was a gradual process. The Hankooks stuck well until they suddenly didn’t, and the autocross turned into a game of catch with the rear end. The Rival’s better longitudinal grip allowed us to get on the throttle sooner, and although our lap times weren’t recorded, we’re sure the difference between the tires was substantial.

Will the BF Goodrich g-Force Rivals make you a better driver? Probably not, but they’ll make you feel like a better driver and likely lower your lap times in the process. The tires will be available in 15 sizes (covering a variety of front and rear-drive applications) at launch, and initial distribution will be handled by The Tire Rack.

If we were autocrossing on a regular basis, or running in a series that required a street tire with a UTQG above 140, the new g-Force Rivals would be our shoe of choice. We know our limitations, and we’re all for anything that helps hide them.

Disclaimer: BF Goodrich flew us out to New Orleans and put us up in a fancy hotel prior to turning us loose on the track. We’d have said the exact same things, even if we’d paid for the trip from our own pockets.