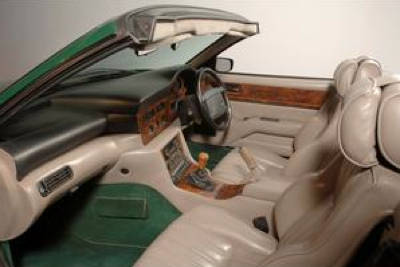 Are you in the market for a vintage drop-top Aston Martin Virage? Do you want one with a bit of history and perhaps a former celebrity owner? In that case, be prepared to bid on lot number 223 at the upcoming Bonhams Aston Martin sale.

The car in question, sprayed in non-metallic Special British Racing Green, was used by none other than His Royal Highness, Prince Charles of Wales. Built in 1994, the car in question was upgraded to the larger 6.3-liter engine, rated at 456 horsepower, but retained the standard coachwork. Princes, it appears, do not drive cars with flared fenders.

At the time of the conversion, the suspension, brakes and exhaust were also uprated, and the car carries a five speed manual transmission (which earns Prince Charles bonus points in our book). The car has been on display at Aston Martin’s headquarters since 2008, when Prince Charles dropped off a second Aston Martin (a DB6 Mk II) for conversion to biofuel.

This 1994 Aston Martin Virage Volante only has 33,960 miles on the odometer, which means it still has plenty of life left to give. The pre-auction estimate has the car selling for $81,000 to $110,000, which is less than half the price of a new ragtop Virage. Call us crazy, but we’d rather have one with a history.