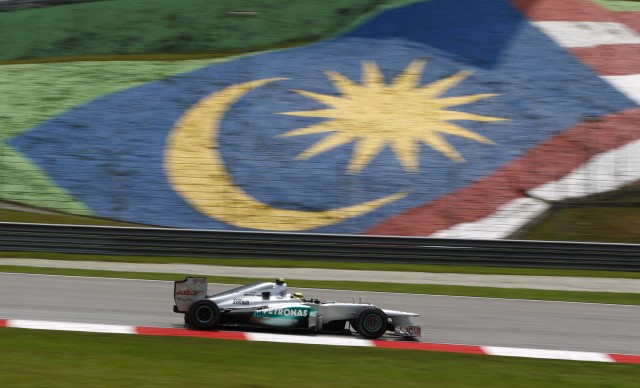 The first of the Hermann Tilke-built Formula 1 tracks is hosting its 14th Malaysian Grand Prix this year, and it’s endeared itself to the teams and drivers over the years.

However, it is a very tough track, due mostly to the hot and humid conditions, which means drivers and teams will be sweating a little bit more than they’re used to.

The predicted temperature for Sunday is a peak 88 degrees F (31 degrees C) and humidity levels will be approaching close to 94 percent, which unfortunately is expected to eventuate in thunderstorms and possibly some rain.

The good news is that rainfall tends to happen late on in the day in Malaysia so there’s a good chance that the race will be dry.

Going into tomorrow’s race, McLaren’s Lewis Hamilton will be starting on pole, having posted the fastest lap during qualifying today, and by his side will be his teammate Jenson Button. Third on the grid will be Mercedes AMG’s Michael Schumacher, while reigning world champion Sebastian Vettel will start on sixth.

Jenson Button remains in the lead for the world championship after gaining 25 points for his win in Australia. Sebastian Vettel is in second place with 18 points, followed by Lewis Hamilton in third with 15. McLaren heads the constructors’ points tally with 40 to Red Bull’s 30 and Sauber’s 12.

We hope you enjoy the 2012 Formula 1 Malaysian Grand Prix and remember to tune in on Monday for our full results coverage.