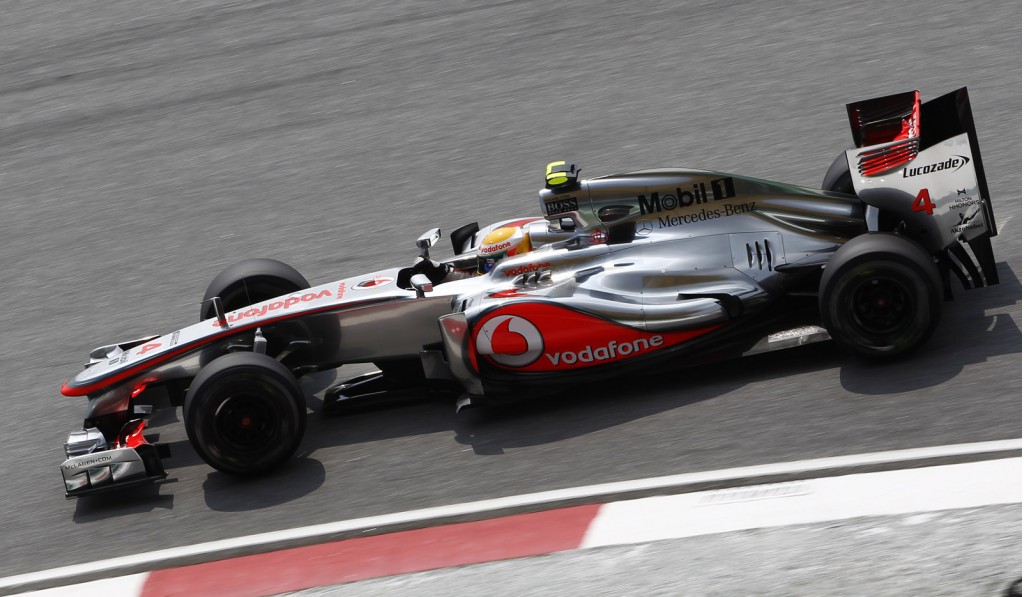 McLaren’s Lewis Hamilton in the MP4-27

Teams competing in the 2012 Formula 1 season have just wrapped their first practice session at Sepang International Circuit, home of the annual Malaysian Grand Prix, and fastest during the Friday afternoon session was McLaren’s Lewis Hamilton with a lap time of 1:38.172.

His teammate Jenson Button, winner of last week’s Australian Grand Prix, was third fastest with a time of 1:38.535, but the big surprise was Mercedes AMG’s Michael Schumacher whose recent pace shows no sign of slowing.

The seven-time world champion was second fastest today, posting a best time of 1:38.533.

Red Bull Racing’s Sebastian Vettel could only manage a fastest time of 1:39.402, which was the 10th fastest time today, though things may easily change during qualifying tomorrow.

The 3.4-mile Sepang track is one of the toughest of the year due to harsh weather and track conditions. Ground temperatures can exceed 122 degrees F (50 degrees C) during the hottest part of the day, which combined with a rough track surface means tire degradation is quite severe.

The other key point is the high lateral demands imposed by the circuit, with the most challenging sequence of corners being turns five to seven and turns 12 to 13. Good car balance is vital and it’s no coincidence that the winner of the Malaysian Grand Prix has gone on to win the world title for the past three seasons.

Going into qualifying tomorrow and Sunday’s eventual race, Jenson Button is in the lead for the world championship after gaining 25 points for his win in Australia. Sebastian Vettel is in second place with 18 points followed by Lewis Hamilton in third with 15. McLaren heads the constructors’ points tally with 40 to Red Bull’s 30 and Sauber’s 12.