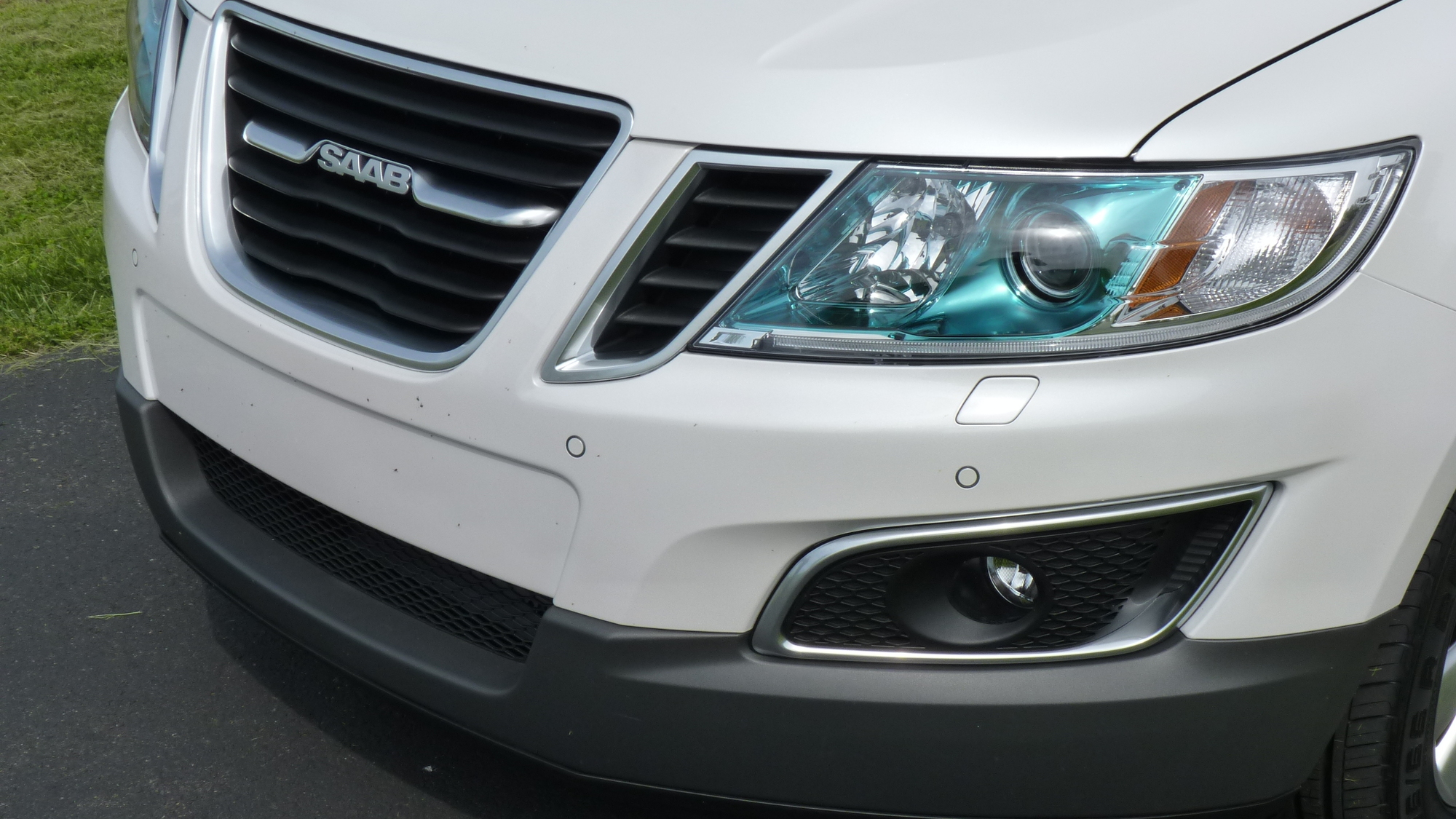 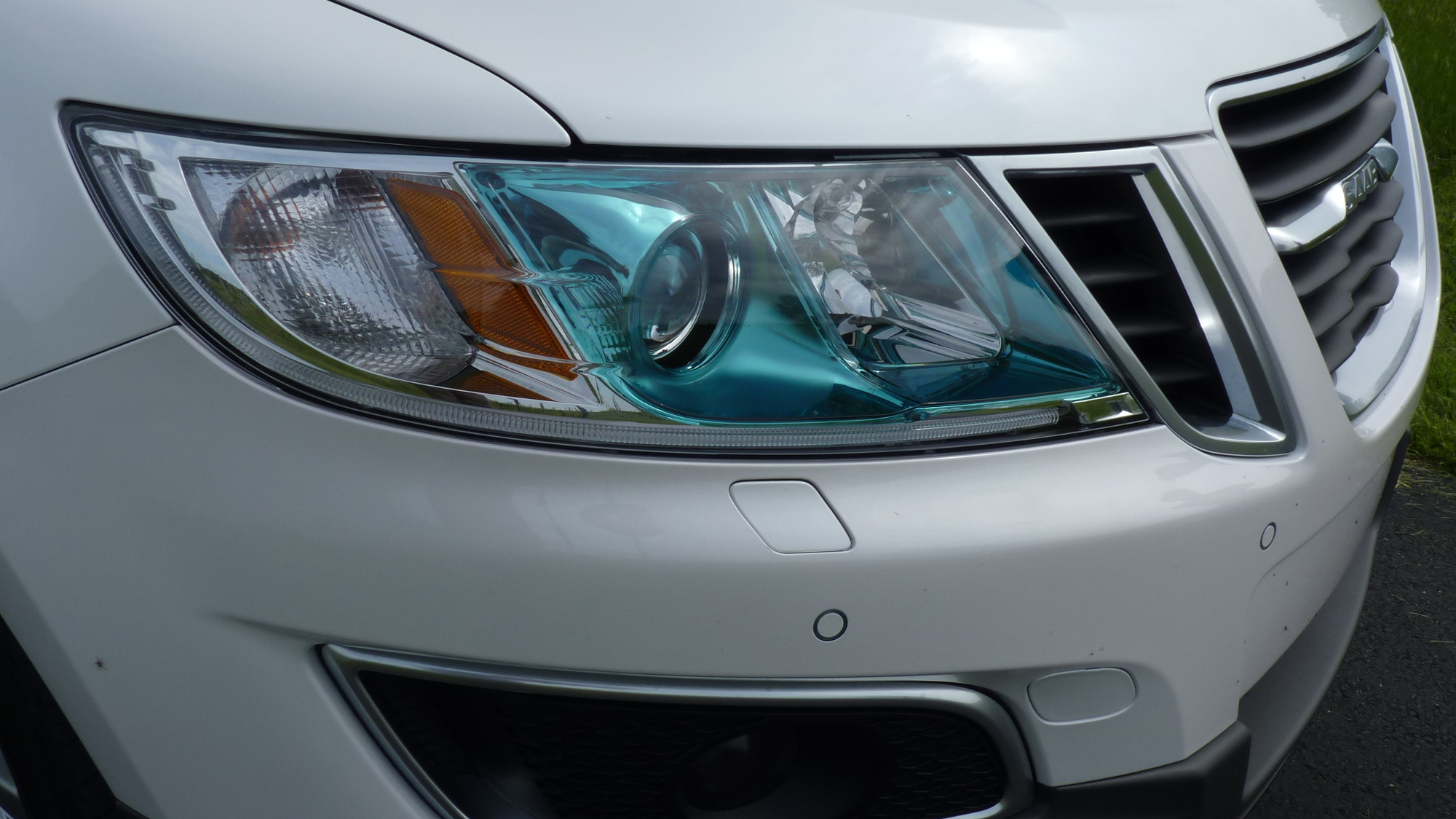 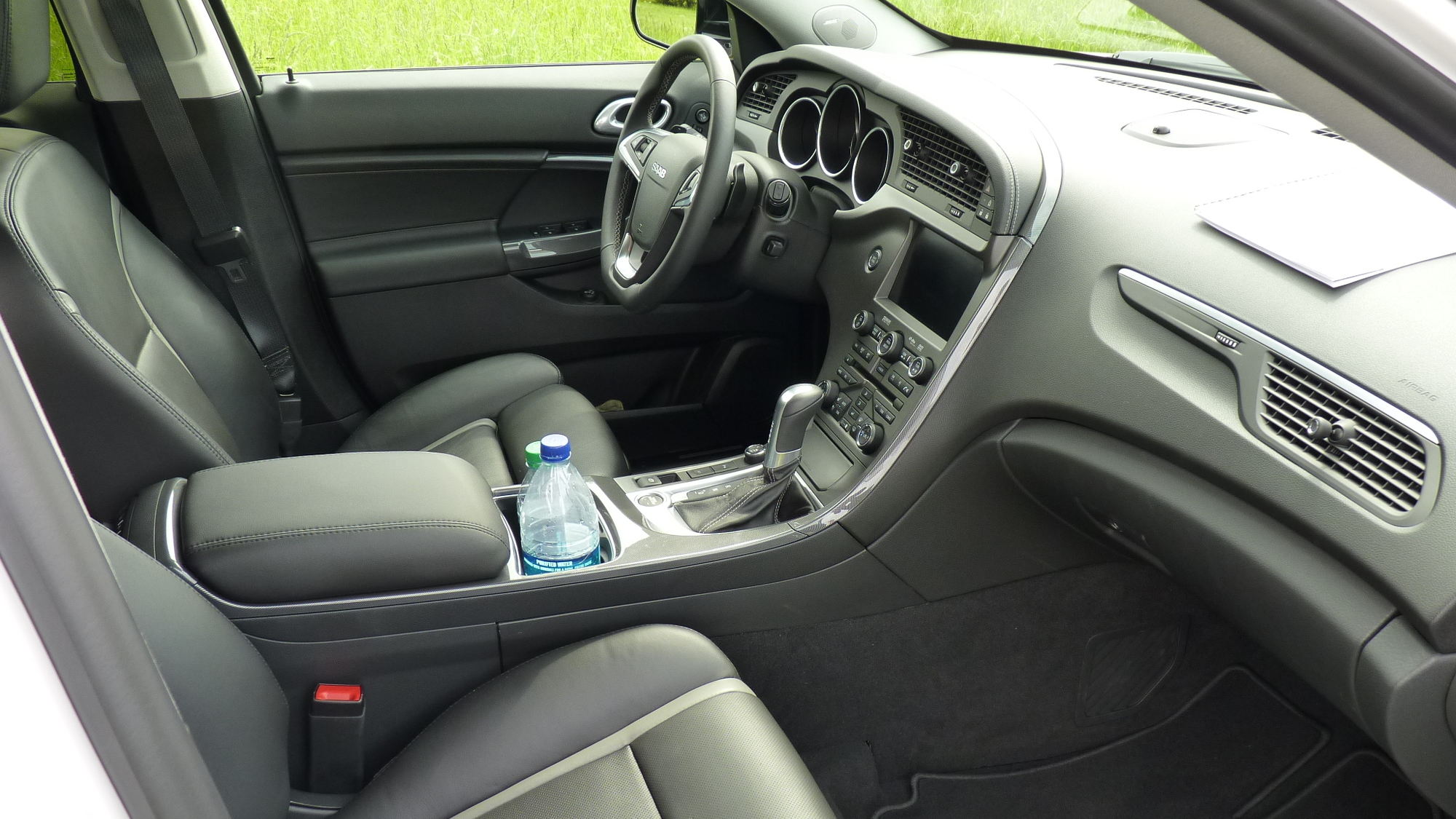 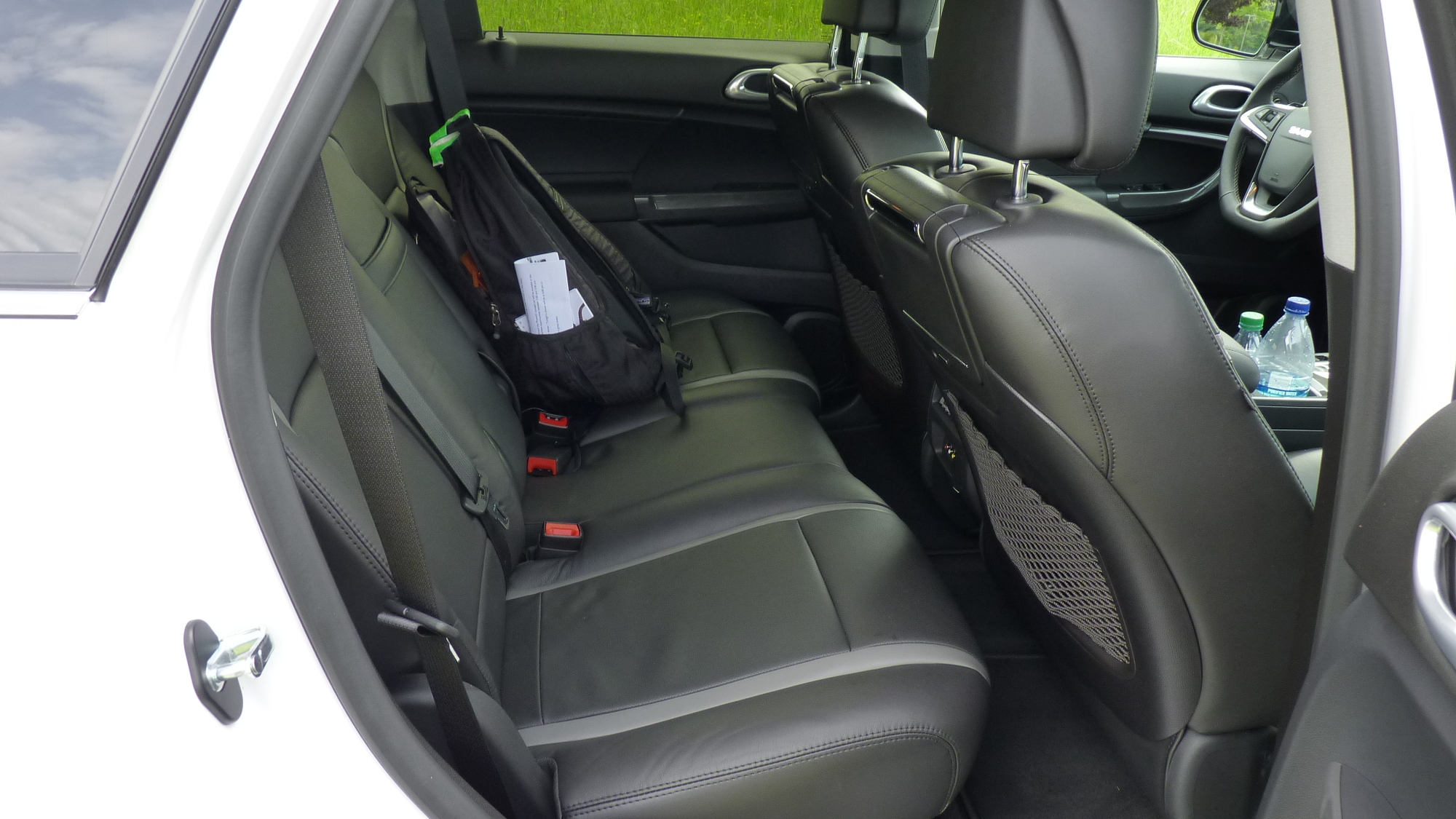 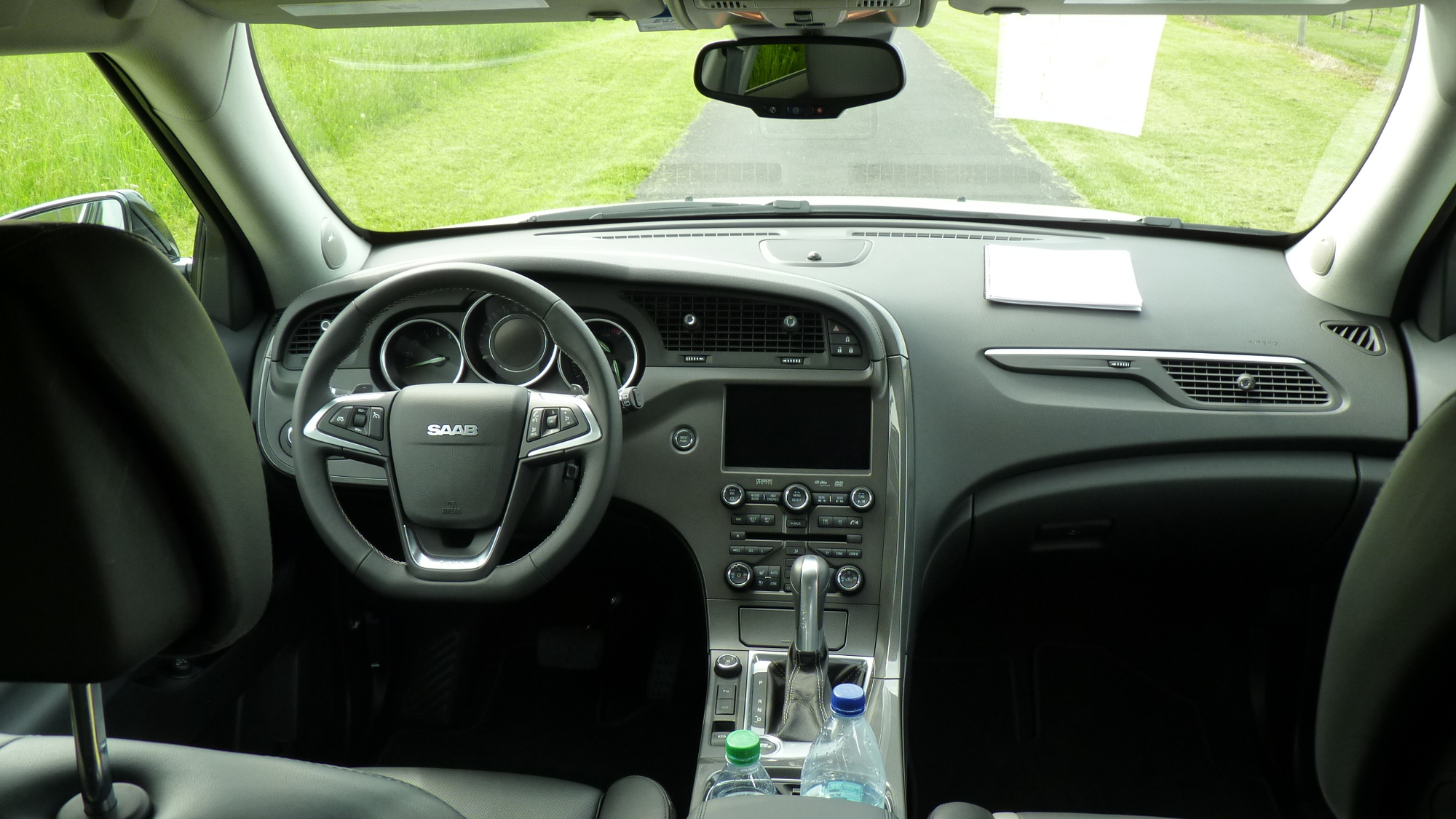 While we have truly unique vehicles like the next-generation 2013 Saab 9-3 to look forward to—or at least hope for, given the current uncertain state of Saab's future—in the meantime the Swedish automaker is subsisting on designs directly shared with its former owner, General Motors.

The last of these to be introduced is the new 2011 9-4X. With all Saab's ties to GM over many years, it's surprising that it took so long to get one of the things it most needed: a manageably sized luxury crossover. But after spending a half-day driving the new 9-4X around Washington, D.C. and the surrounding suburbs and countryside, we can say that Saab gets the most appealing, tastefully appointed version of the so-called Theta Premium platform.

The new 9-4X doesn't look like any Saab we know from the side profile (we can't help but see a reworked Saturn Vue if we squint, or even up close around the cowl), but truthfully, you might never know—whether at first glance or even after driving it—that the new 9-4X crossover is closely related to the Cadillac SRX. Saab officials say you can park a 9-4X alongside an SRX (they're both made at the same plant in Mexico) and you'll see few if any common details between the two vehicles. While the SRX gets lots of creases, the Saab has mostly smooth sheetmetal; there's no lower-body cladding; and a high rear spoiler helps play the visual trick of making the roofline seem a little lower than it is. In back, the 9-4X is at its most generic and ubiquitous, but there's a LED light bar that Saab says will be one of the brand's new distinguishing features. But it's squarely from the front that the new 9-4X is at its most aggressive and expressive, thanks to a vertically-stretched version of Saab's three-port grille, flanked by nicely detailed headlamps that are given a blue hue around the edges—a controversial detail, though one that we liked.

Inside, it's (almost) all Saab

Inside, the instrument panel in the 9-4X looks and feels all the part of a Saab. Yes, the ignition button is at the center console, and the green gauge pointers and the brand's distinct gauge font are a constant reminder, along with the odd joystick air vents and old-style black-plastic gridplates over them. And the instrument panel smoothly wraps over and downward and is canted toward the driver. Only the sound-system and climate switchgear look like familiar GM parts-bin pieces. The one especially cool functional design feature that the Cadillac sibling has and Saab doesn't get is the retractable, partially hidden navigation screen.

The 2011 9-4X is offered in three different performance variations: 3.0i, 3.0i XWD, and Aero XWD, with XWD referring to the brand's all-wheel drive system. The 3.0i models come with a 265-horsepower, 3.0-liter V-6, which in the SRX we've observed as neither very responsive nor fuel-efficient (it's also an engine that needs to be revved a lot to get to its power).

The only versions that Saab made available were of the Aero version—featuring a powertrain that Cadillac has decided to cancel (it comprised just 5 to 10 percent of SRX sales). While the 2.8-liter turbocharged V-6 is modern enough, with direct injection, and variable valve timing, its power delivery feels more like the turbo powertrains of a decade ago. There's nothing instantaneous about the torque delivery here (as in BMW's sweet turbo six), even if it can make its peak 295 pound-feet as low as 2,000 rpm; it takes the twin-scroll turbo surprisingly long to spool up for squirts of the throttle. That considered, the 9-4X launches quickly off the line, but not nearly as quick as you'd expect for its 300 hp and high torque output.

How many horses again?

It shows in the numbers, too; Saab has revealed acceleration specs for the two models, and the Aero with XWD is only two tenths of a second (7.7 seconds) quicker to 60 than the standard non-turbo version with AWD. And it felt a little slower in transitions than those numbers would suggest.

The elephant in the room is weight. In Aero XWD guise, as we tested it, the 9-4X is almost embarrassingly overweight for a two-row utility vehicle that's on the smaller end of mid-size: about 4,650 pounds. As such, it's considerably heavier than the Mercedes-Benz GLK, which we'd put in the same category, also heavier than the Acura MDX or Lincoln MKX in similar guise.

While the 9-4X might not feel fleet-footed, it's still quite satisfying to drive. The hydraulic variable-assist steering system is somewhat numb but nicely weighted, but it gives the 9-4X a responsive, predictable feel whether at low parking-lot speeds or making a sudden lane change on the highway. We weren't so fond of the brake feel at first as it had less up-front assist than is typical today, but just over the few hours of drive time we grew to appreciate their predictable, linear, strong stopping power.

We noted some indecision from the six-speed automatic transmission in Comfort mode, but that was erased as soon as we switched to Sport mode, which allows a different transmission calibration as well as different throttle mapping, power-steering characteristics, and damping behavior.

Overall though, even in Sport, when the road snaked a little too tightly and when the heaves of a rural Virginia road turned a little too abrupt, the suspension did seem a little overwhelmed by the 9-4X's heft; you won't find the dynamic sophistication you would in a BMW X5 or Audi Q5 or Q7.

The Haldex XWD system here is one of the more sophisticated, Saab says, incorporating an electronically controlled limited-slip rear differential system that can provide an infinitely variable level between zero and 50 percent of power, to the rear wheels when needed. It's pre-emptive, meaning that it can anticipate conditions in which slip might occur and redistribute power in advance.

The mileage we saw wasn't anything to be proud of, either. In a loop that consisted of about 160 miles of Interstate cruising and Virginia two-laners (with the trip computer actually zeroed after we'd departed dense DC streets), we averaged about 19 mpg. That's close to the same mileage we would likely have seen in the same conditions in a V-8 Chevy Tahoe. Sure enough, EPA figures for this engine are an embarrassingly low 15 mpg city, 22 highway.

Great front perches and plenty of cubbies, but a little tight in back

For such a substantial vehicle with just two rows of seating, the second row isn't all that spacious. With my driving position—the seat at its rearmost point but the seatback quite upright—a six-foot colleague didn't have enough kneeroom to wedge in; although if the front seats are forward a bit, those six feet and taller can sit back there with enough headroom.

What you do get, though, are great front seats, an excellent driving position, and a very well-hushed interior. Pedals are adjustable, too. The only comfort items missing are the thigh extensions that the brand gives the 9-5.

Cargo-wise, there's lots to love here. Although the floor is a bit taller than you might expect, there's a 'hidden' compartment under a large portion of it; rear seatbacks also fold flat, and they can be adjusted for rake to three different positions. The cargo management system is very useful, with a bar that can be configured to split part of the space off—to keep grocery bags from tipping, or suitcases from sliding around the space. Each of the four doors has two levels of cubbies, with the upper one working quite well for smartphones; there's also a dual-level glovebox and a big center-console bin that includes USB and aux-in ports.

Here's where it gets a little sticky. Some earlier reports had positioned the 9-4X as significantly cheaper than its Cadillac counterpart, but it's not. Even comparing base models, the 9-4X starts only about four hundred dollars below the SRX. Our loaded Aero totaled $57,260, including the Power Package, Technology Package, Rear Passenger Package, panoramic moonroof, and navigation system. Meanwhile, a top-of-the-line 2011 Cadillac SRX Turbo Premium—of which there are still some left at dealerships—with the optional rear-seat entertainment system (it includes most of those other features costs just $54,630. All the typical safety features are included, but surprisingly, there are no optional safety-tech gizmos like blind-spot systems.

Is the 9-4X different enough?

In all, the problem with the Saab 9-4X is that it just isn't very compelling; there's no 'killer app' to make the Saab much more desirable (or dramatically different) than any other brand that will offer strong resale value and brand support—something that, it's hard to ignore, is a little uncertain at this point. This is the part of the luxury market where shoppers still pay attention to price and monthly payments, and at $5,000 to $10,000 less, the 9-4X would seem a considerably better deal.

In one respect the 9-4X is a vehicle that will give the brand an entry point into a segment they've been missing out on for a long, long time. In another respect, the 9-4X is yet another example of rebranding left over from Saab's GM days, and arguably not a true Saab. Does the 9-4X give Saab some new bragging rights or muddle the message even more? Although the 9-4X is a great vehicle, we're left thinking the latter.