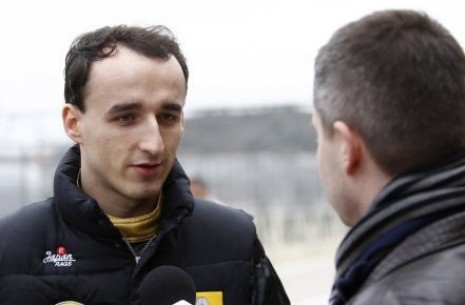 It's important to consider the source of the latest news of Robert Kubica's condition following the rally accident that saw him spear a guardrail and end up in the hospital from February until just a couple of weeks ago: Lotus Renault GP team boss Eric Boullier. But even if Boullier is biased toward bullish on Kubica's condition, we're hopeful that his optimism is well-founded.

According to Boullier, who visited Kubica in Italy where the racer is undergoing therapy, "Robert has made another step forward in his rehabilitation process and doctors are pleasantly surprised by the way in which his condition is improving." Boullier cautioned that Kubica's recovery would still be "quite a long process" however.

Despite his injury and rough road to rehab, Kubica is still driven to stay on top of the developments within the F1 team and progress with the car. " Robert is still very much involved, keeping in touch with his engineers, and we have been keeping him informed of every important decision the team has taken. He may not be with us all of the time this year, but he’s very much a part of the Lotus Renault GP family," said Boullier.

The current phase of Kubica's treatment seeks to restore functionality to his damaged arm and hand. Further operations will be necessary to maintain and restore mobility of his forearm and elbow muscles--the first of which was executed today, with no complications, according to the team.