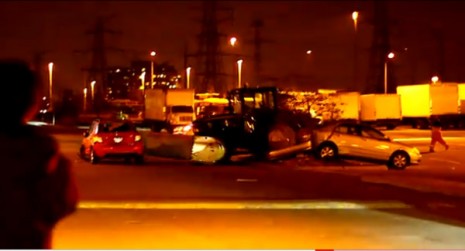 Whoever allowed the tractor in this next video to run amok in a Walmart parking lot in Richmond Hill, Ontario remains unknown but the carnage caused by his or her vehicle was captured live thanks to several onlookers.

Also see: So Is Chrysler's Invisible Ad Monkey Flipping Off PETA? and Mercedes-Benz: US Gas is Too Dirty For Our Engines

The all-wheel drive John Deere, fitted with massive snowplows, circles aimlessly in the parking lot before its trajectory crosses not only into the actual Walmart building but also several cars including a Suzuki SX4 and a Toyota Corolla.

The dozens of onlookers, plus several police officers, were unable to stop the vehicle. However, it eventually ran into a lamp post where one individual managed to hop on board and save the day.