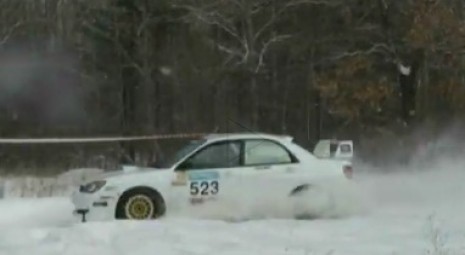 Travis Pastrana has moved on to NASCAR's Nationwide series, but he's been replaced at Subaru Rally Team USA with David Higgins, and Dave Mirra remains in the other factory seat. Despite that, it wasn't a pro team driver that won this year's Sno*Drift Rally, the first event of the RallyCar Rally America 2011 season. Instead, it was privateer Travis Hanson in a Super Production car that took the top step of the podium.

Without any real sponsorship, Hanson's drive to the top of the brutal, freezing rally is a feat not to be underestimated, especially having overcome Mirra and North American rally great Antoine L'Estage. Hanson is hopeful the win will lead to some help from sponsors for the rest of the season. Given the skill, both in terms of crew and driving, necessary to take the top spot at any professional rally event, he certainly deserves it.

But Hanson wasn't the only privateer to take a trophy in the overall ranks: Joseph Burke took third place overall in his first drive ever on snow. Get these guys some cash, pronto.

As for the pro drivers, SRT USA's David Higgins went out in the first day of competition due to an accident. Antoine L'Estage's co-driver Nathalie Richard explained the incident that ended their run at the win: after winning the first three stages, stage four presented a crest before a sharp right turn, but L'Estage couldn't get the car turned and they went off the road into some trees. Once out of the ditch, the car was overheating, and they called off the rally to preserve the car for another rally coming this week in Canada.

Dave Mirra kept plugging away, and managed to come in second--a commendable result, but not as impressive as Hanson's and Burke's, as they had to overcome not only the rally itself, but the budgets, support, and development of the pro cars and drivers.

Congrats to both, and here's to grassroots meeting greatness!

Hit the link below to see tons of video coverage from the event.