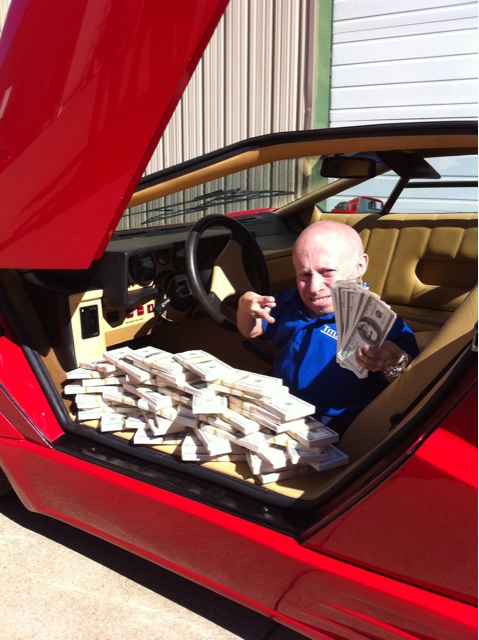 • Remember that clip of 50 Cent jamming $2 million into a Lamborghini Murcielago? Not to be outdone, Verne Troyer has posted a photo reply, featuring the actor with stacks of (possibly real) dough in his own Lambo Countach. It's supposed to represent $2 million, but it looks a little short to us.

• Like the idea of a Rolls Royce Phantom Drophead Coupe, but wish it were a little showier? T-Pain may be able to help.

• Mel Gibson wasn't always the dried-up, wackadoodle, anti-Semitic husk of a human being that he is today. Once upon a time, he was a beloved Hollywood fixture. In fact, insiders used to say that every time Mel Gibson lit a cigarette, a blind child regained her sight. Today, Mel's cigarette habit is just drying him out, like turkey jerky. It's probably not doing much for his car, either.

• Earlier this week, NFL running back Ray Rice wormed his way out of a ticket by signing an autograph for the police officer's son. We don't know who's dumber: the officer who accepted that meager bribe or Rice, who decided to brag about it on Twitter. Let's call it a tie.

• Remember Paul Weller? If you're under 30, of course you don't. Grown-ups, however, recall the Brit pop star for his trademark hairstyle and suave musical stylings. And now, we've got something else to remember him by: a customized MINI Cooper, being auctioned off Nordoff Robins and War Child charities. It's like a delicious, drivable Neapolitan ice cream -- and it looks a lot better than Katy Perry's leprous version.

Added bonus: here's a video flashback of Weller in his heyday, fronting the Style Council for a performance of "My Ever-Changing Moods". Ignore the ridiculousness of Top of the Pops, if you can. Happy Friday.