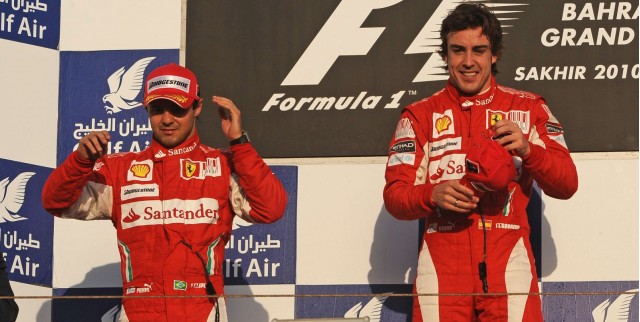 Bernie Ecclestone's mad-cap machinations with the rules over the past few seasons have seen more than a little disgruntlment, but this time, the fans, drivers and teams agree: the refueling ban makes for boring racing. Proposals on how to fix the situation are already being made, but so far, Ecclestone isn't ready to change his ways.

Bore-rain Grand Prix
The problem that many expected played out in processional form this weekend, as uniformity of tire and fuel strategies saw little passing or drama on track. While qualifying was relatively exciting, with teams running on vapor and strategically setting ride heights to deal with the huge increase in fuel load for the race, the Grand Prix itself was a bit of a snooze.

Even the return of Michael Schumacher to the grid couldn't keep things exciting on course. To fix the situation, some of the members of the Formula One Teams Association (FOTA) are suggesting a mandatory second pit stop, while others are seeking to return to refueling. Ecclestone wants to hold off judgment until after the China GP, saying, "I think we ought to judge these things a little later on. It's a bit early. We ought to wait until we come back from China."

Ferrari's Felipe Massa and Force India's Adrian Sutil agree with Ecclestone, blaming the circuit more than the rules changes for the parade-like quality of the Bahrain event. "If you push two laps too hard to gain a position you overheat the tyres and then maybe it's over and you need to pit to change that tyre set or you lose not only one position but maybe two or three, so it's not worth it in the end," said Sutil. Massa added that Melbourne might prove more interesting, "It's a very different circuit and layout to here, but we need to gain experience from this race and try to understand many things for the future."

Rumors and Ruminations
While the 12 teams on the grid diced for position in qualifying and strolled largely in order around the circuit in the race, the rumors and whispers about the teams not present on the grid flew behind the scenes. One of the most interesting revelations of the weekend--for us Americans, at least--is that the U.S. may see the return of F1 to Indianapolis. It's been three seasons since Indy was part of the F1 calendar, but with the exit of Tony George from the board at Indianapolis Motor Speedway, the door is open for a return. When? Probably not next year, but 2012 is a strong possibility.

More American rumors were circulating with former engineers from the just-short-of-grid USF1 team saying the race team, headed up by Peter Windsor, Ken Anderson and Chad Hurley, still had hopes for the 2011 season. Jean Todt appears open to the idea as well, though he's playing it close, saying only, ""The non-appearance of USF1 is definitely a disappointment. The World Council has asked me to review the situation, so we will see what happens. When I say that it's very disappointing I know that they have tried hard, made a lot of effort."

Results And Looking To Melbourne
Fernando Alonso took advantage of a late engine problem from race leader Sebastian vettel in the Red Bull Racing car to win his first race for Ferrari. Felipe Massa followed closely behind to take the second step for the Prancing Horse, and 2008 World Driver's Champion Lewis Hamilton rounded out the top three finishers. Sebastian Vettel managed to fight off Nico Rosberg to hold on to fourth.

Michael Schumacher's return to F1 saw him finish in sixth, up two spots from his start position, and just behind teammate Nico Rosberg. The two Mercedes GP drivers were within four seconds of each other at the end of the race, about 40 seconds behind Alonso. Last year's world champ, Jenson Button, driving this year for McLaren, finished just behind in seventh.

The newer teams to the grid, Lotus, Virgin, and HRT, saw several retirements--in fact only Heikki Kovalainen's Lotus-Cosworth finished the race out of the six, with Bruno Senna (HRT) and Jarno Trulli (Lotus) both knocked out by mechanical issues, while Karun Chandhok (HRT) crashed out on the first lap. Virgin's two cars both suffered mechanical problems as well, with Timo Glock losing his gearbox and Lucas di Grassi out with hydraulic issues. BMW-Sauber also both of its cars retire due to hydraulic problems, and Renault's Vitaly Petrov ended his day with a broken suspension on lap 13.

At the end of the day, it was clear that the top eight finishers, representing Ferrari, McLaren, Red Bull, and Mercedes, were all closely matched. Each driver and all four teams are capable of contending for the title this year, though it remains to be seen if the drama of such a deep pool of top-tier competitors will outweight the boredom of parade-lap racing.

Looking ahead to Melbourne, which kicks off its first practice in just over 10 days, all four of the front-running teams stand poised to make a run for the pole and the podium, though Renault, Williams, and Force India are all within striking distance as well, particularly Vitantonio Liuzzi, Rubens Barrichello and Robert Kubica, who finished between seven and 13 seconds behind Mark Webber's eigth place in Bahrain.

Will the track at Melbourne be more conducive to overtaking? Will the weather help avoid overheating tires? Will the Red Bull team face more exhaust/engine issues? Can Ferrari hold on to its early lead, or will pressure from behind overcome? We can only wait, and tune in to watch, when the race weekend starts March 26.