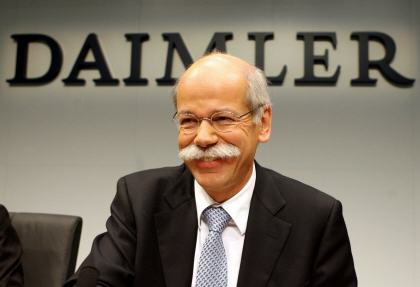 There's been a lot of rustling in the mainstream press about the economy possibly having turned a corner, or at least bottomed out the trough, and the indicators in the luxury car segment are beginning to bear that out. But Daimler, at least, is still playing cautiously.

In fact, luxury car sales have outpaced the car industry on the whole by about 2-3 percent, according to Dieter Zetsche, Daimler's CEO. Jurgen Walker, CFO of Daimler Financial Services said at a press conference earlier this week, "We’ve achieved the turnaround, and we expect to once again make a contribution to the Group's earnings even though we had the toughest year in our company’s history."

But even so, it's not yet to the level of a full recovery. That will take time. Zetsche expects slight growth to somewhere between 10-11 million total vehicles.

That is considerably short of some of the sunnier estimates from Detroit companies, which range up to 12.5 million or more. GM is expecting about 11.5 million for 2010. Chrysler is aiming toward the higher end of the range according to their recent 5-year plan exposition.

Zetsche says he thinks it will be 2012 or 2013 before the market is back to its former self. That the market will recover to its former levels at all is something of a leap, as presentations at BMW's "One-day University" this week indicated that a fundamental change has taken place and that volumes may not reach their former heights again.

Only time will truly answer the question, but the degree of uncertainty is sure to shade the next several years of product decisions, especially at smaller and more focused luxury and performance marques.