';
Skoda has taken the wraps off its next-generation Fabia hatchback, to be officially introduced at the Geneva Auto Show in March 2007. A total of seven engines will be available for the new Fabia – four petrol and three diesel engines ranging in power from 44kW to 77kW. With this new model, Skoda will also offer a six-gear automatic Tiptronic transmission for the smallest of its models instead of the five-gear manual transmission, electronically controlled Climatronic air conditioning, or head airbags. Also new is the Bluetooth phone system and iPod/MP3 player jack. Though Skoda hasn't announced plans for a vRS model yet, we're sure it's in the pipeline. 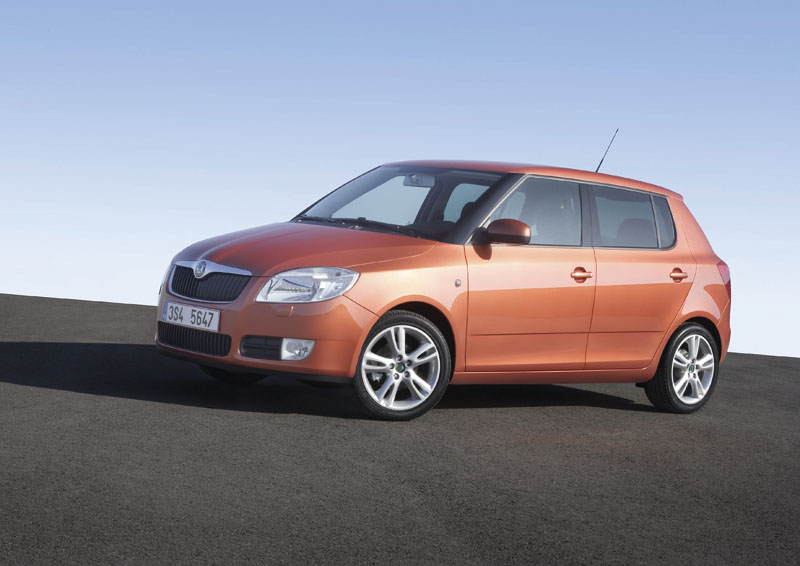 The world premiere of the new generation of the Škoda Fabia will take place at the Geneva Auto Show in March 2007. This will be followed by its launch in the European markets. Production of the bodywork versions, the Fabia Estate and the Fabia Sedan of the first generation will be continued.

The total length of the new Fabia has, thanks to the new design of the front bumper, increased. With its external measurements (3992 mm x 1642 mm x 1498 mm) the new Škoda Fabia hatchback is among the largest in its class. The effectively usable space offers the occupants more space both in the front seats and in the rear. The boot has a basic capacity of 300 litres, and, when the rear seats are folded down, increases to 1163 litres.

In addition to its extraordinary reliability, spaciousness, its excellent driving properties, the safe construction and the outstanding price-performance ratio, there is also a wide range offered in bodywork external colours with its fresh design and coupled with a combination of high-quality materials and colours in the interior.

The Fabia also exhibits further improvements in the sector of safety. New: passengers on the front and the rear seats are protected by head airbags. In the rear, a child’s seat can be affixed with a top-tether belt which limits the forward movement of the upper part of the child’s seat in the event of a head-on collision.

State-of-the-art technologies, such as, for example, virtual reality, were applied in the development and the construction of the automobile and its equipment. And with this new model, Škoda is also providing the possibility of ordering the six-gear automatic Tiptronic transmission for the smallest of its models instead of the five-gear manual transmission, electronically controlled Climatronic air conditioning, or head airbags. In the field of communication technologies, the new Fabia provides a modern, innovative preparation for the GSM telephone with Bluetooth, or the audio system with the possibility of connecting external units such as MP3 players or iPod.

A total of seven engines will be available for the new Fabia – four petrol and three diesel engines. Both of the popular three-cylinder petrol engines now have increased performance and provide the car with more elasticity.