';
A team of researchers from MIT have created a concept for a lightweight electric car that can be folded and stacked in order to ease congestion in crowded car parks. With the help of General Motors and MIT’s own Media Lab, the team is developing several working-prototypes. Called the City Car, the concept uses an ingenious wheel design that combines an electric motor, braking mechanisms, suspension, and digital controls, all into a sealed removable section.

In an interview with The Boston Globe, Media Lab research assistant Ryan Chin said "we're eliminating the internal combustion engine," and by avoiding the use of a conventional driveline and transmission the car will be more efficient. An intelligent computer system will be able to modify the interior to suit different individual’s needs, such as adjusting interior colors of the dashboard look and feel. It can even direct the drivers to the closest available parking spots.

The car’s folding chassis will allow it to be stacked like a line of shopping trolleys at dedicated parking centers, where its batteries could also get a top-up. The team hope to have the first prototype completed by the end of the year, however, it will have to prove crashworthy and meet government speed and emissions standards before it’s allowed out on the road. 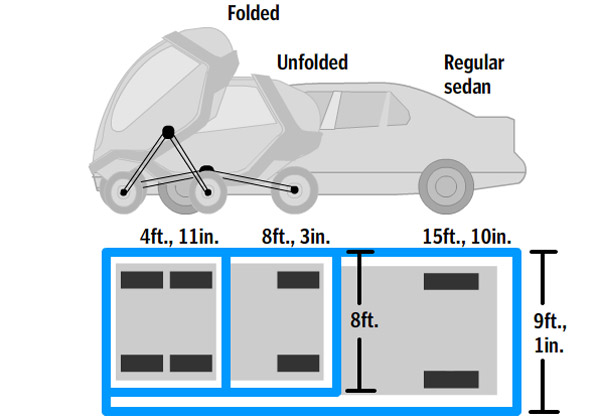