';
Australia's love affair with muscle cars is nearly as long, and recently much more ardent, than America's. The 1978 Ford Cobra XC, based on the 1977 winner of the Bathurst 1000 endurance race, kicked off the Aussie Cobra brand in style. Carrying on the tradition of big power and big iron is the new Boss 302 powered FPV GT Cobra. As we wrote last Friday, the latest incarnation of the Ford Performance Vehicle division's Falcon-based muscle madness will be a limited edition, with only 400 sedans and 100 utes available. 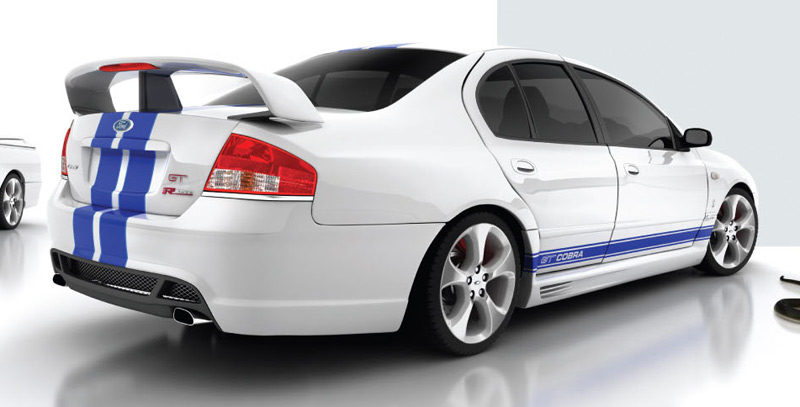 That's right - 100 Cobra utes will be made. Long a popular vehicle form-factor in the Land Down Under (and not many other places), the ute combines the utility of a pickup truck with the low-slung stance and performance of a car. And this particular ute provides some serious performance. Like the sedan, it will bear the 302kW, 540Nm (405hp/398lb-ft) 5.4L quad-cam V8, either a close-ratio six-speed manual or the ZF Sequential Sports Shift six-speed automatic transmission, limited slip differential, and an optional (standard on the GT sedan) R Spec handling package.

The original Boss 302 under the hood of the 1978 Cobra was named for its displacement of 302 cubic inches (4.9L), but this model takes the 302 moniker on the basis of its power output of 302kW, which is exactly double that of the original's 151kW, despite only having grown by 0.5L (30.5ci). Like the original, the blue racing-stripe on white paint gives the Cobra a race-inspired look. Inside, leather Cobra snake-logo seats are standard.

Prices start at AUD$61,200 for the Cobra Ute and AUD$65,110 for the GT Cobra sedan. If you want in on this homage to a slice of racing history, you'll have to act quickly, because this combination of price, performance, and exclusivity doesn't come along every day.

FPV’s new Cobra range was revealed during a parade lap of Mount Panorama prior to the start of the 2007 Supercheap Auto Bathurst 1000.

Thirty years ago the Ford Falcon XC Hardtop staged the now famous 1-2 victory formation at the 1977 Bathurst 1000 race, which led to the release of the limited edition Cobra XC Hardtop the following year.

“While the vehicle’s exterior features the same blue racing stripes and coiled snake emblem that Cobra is famous for, the vehicle will be powered by FPV’s latest high performance Boss 5.4-litre quad-cam 32 valve V8 engine, which now produces 302kW.”

The new Boss 302 engine powering both the sedan and Ute variants produces 302 kW of power and 540 Nm of torque, and is equipped with FPV stainless steel fabricated exhaust manifolds and a high-flow dual exhaust system.

For motoring buffs, 302 was the capacity in cubic inches of Ford’s small-block V8 engine and is also exactly double the 151 kW output of the 1978 Cobra’s 4.9-litre V8 engine.

FPV’s innovative R Spec handling package is fitted as standard to the GT Cobra, contributing to the outstanding chassis dynamics of the special edition model.

The white exterior features blue striping across the bonnet, roof and rear deck lid, and is completed by the unique Cobra badge on each front fender. The GT Cobra will also include exclusive R Spec badging.

Both variants are fitted with leather seats as standard, with each seat carrying the coiled Cobra snake logo.

Production will be limited to 400 sedans and 100 Utes, and each vehicle will come with a unique Cobra build badge identity.