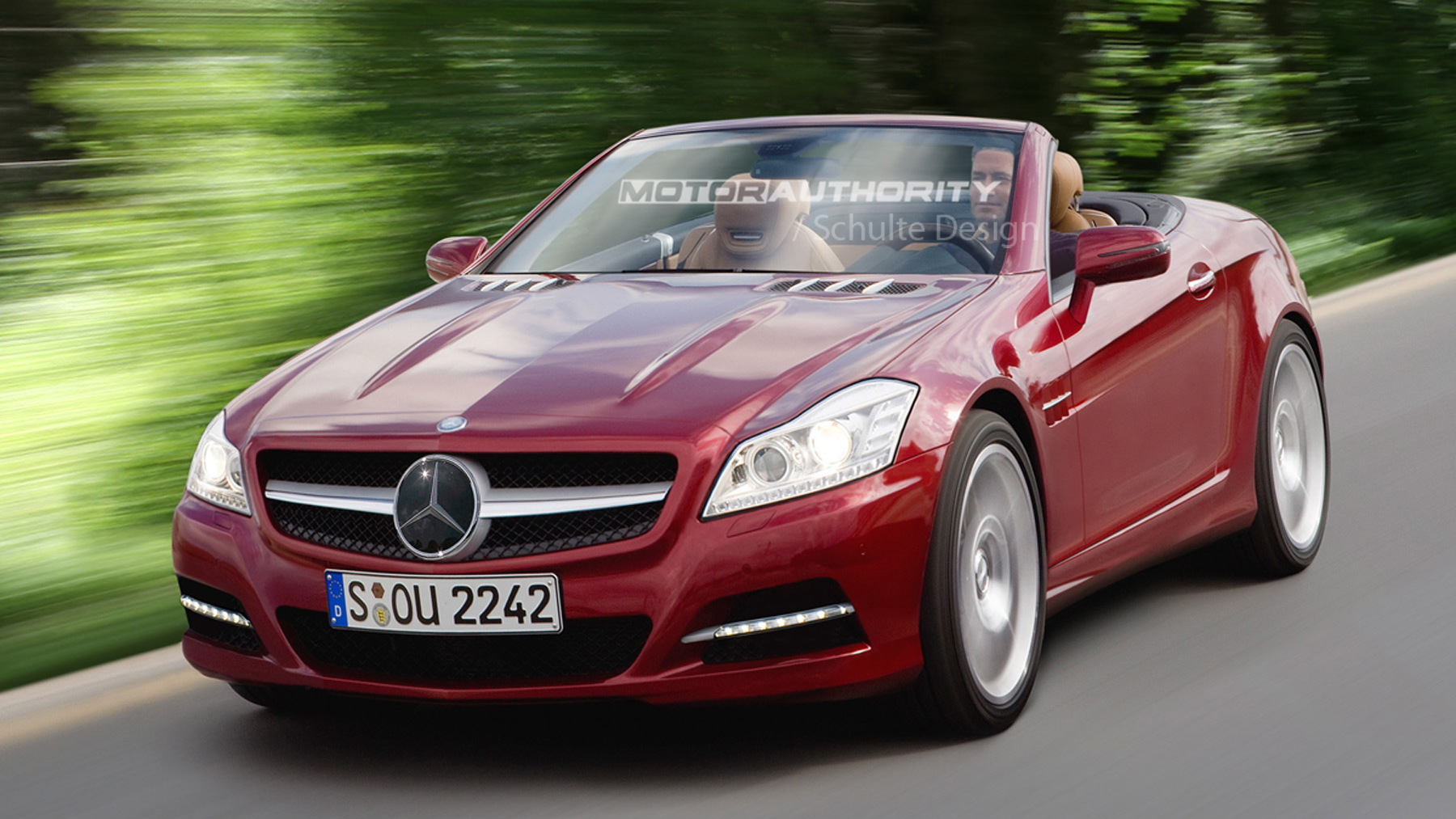 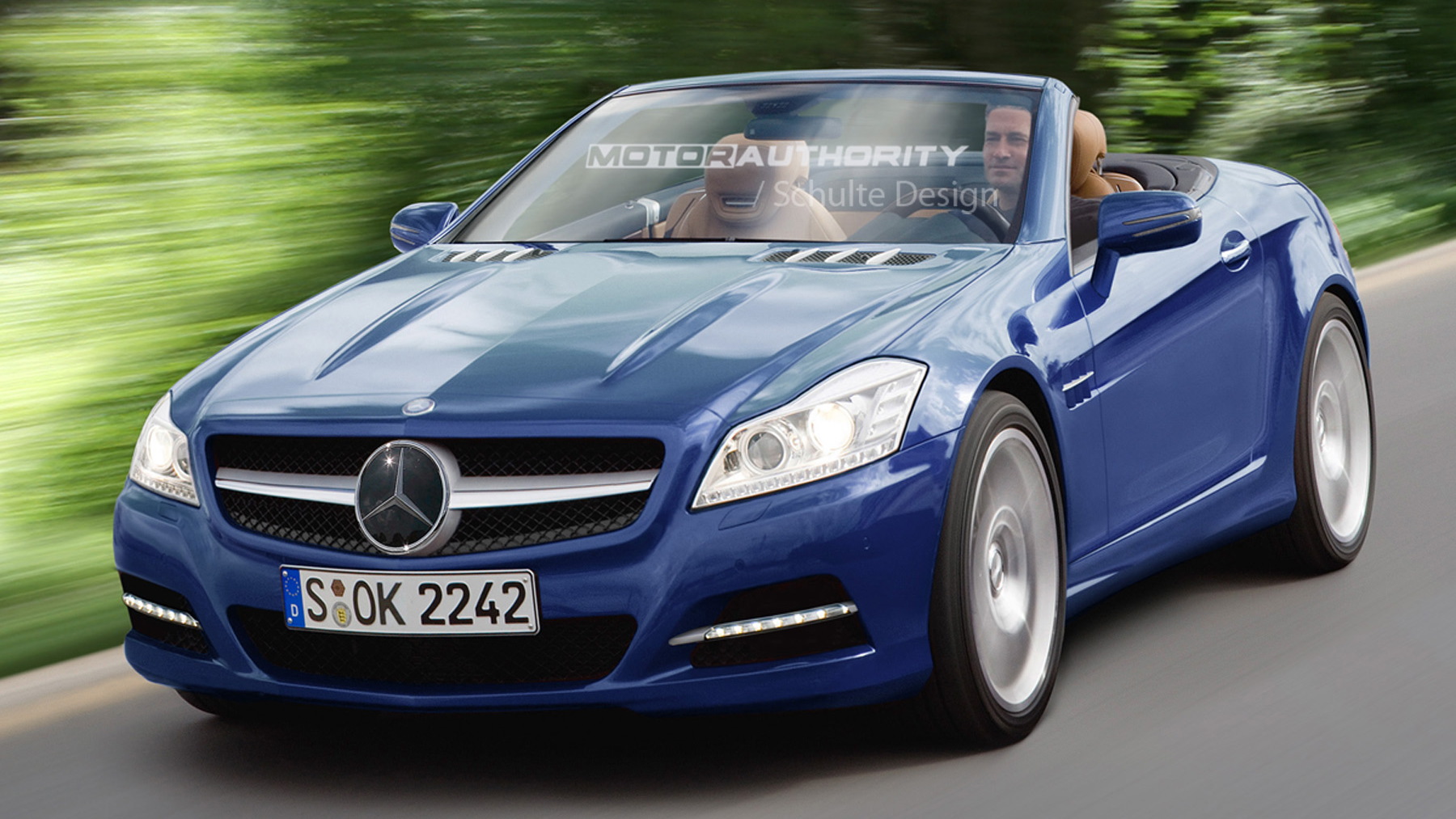 The SLK roadster has served Mercedes-Benz well over its life since introduction in 2004, and like all cars its once-cutting-edge design has become somewhat tired, despite a mid-cycle facelift. An all-new SLK is in the works, however, spotted on numerous occasions testing in Germany and previewed in our renderings below. A new report today tips the roadster for introduction in early 2011, after going on a strict diet and gaining some cargo space - and possibly gaining a sporty new engine.

According to a new report from Automobile, the next-gen SLK will drop 200 pounds in weight while adding a bit of space to the smallish trunk, increasing capacity to 11.2 cubic feet. That will definitely make the vehicle more useful, both for trips to the golf course and weekend getaways.

A new engine may also be in the mix, with a 300-350 horsepower 3.0-liter twin-turbo V-6 tipped for release some time after the car's official debut. The launch engines will stick with the current tried-and-true lineup of  gasoline engines, with evolutionary developments expected. There is also talk of a possible twin-turbo 3.6-liter V-8 generating over 470 horsepower for the AMG version once the standard 6.2-liter V-8 is replaced, though neither of the twin-turbo reports has yet been confirmed by any Mercedes or AMG officials.

There is also the possibility that the 2011 SLK will get the 2.2-liter four-cylinder diesel found in the current C250 CDI. Rated at 204 horsepower and 369 pound-feet of torque in its C-Class application, the engine would be sporty, but whether Americans would find it palatable is an open question. Mercedes has discussed bringing diesels to the U.S., but in the GLK and C-Class, not a sporty model like the SLK.

Aside from the next-gen car's general proportions not much is clear due to generous slabs of camouflage cladding in the spy photos captured so far. Nevertheless, the car's LED daytime running lights, common to all of Mercedes' most recent models, are obvious. The door-mounted side mirrors stand out further on thinner stalks than the outgoing model, while the general proportions of the car with the top up seem to reflect a longer hood and more rearward seating position.

The sharper angle between the rear of the hard top and the rear deck area also mimic the upcoming SLS AMG supercar to a degree, though the real design cues shared with that car are expected to be located around the front fascia. At any rate, it's clear that Mercedes has dumped the controversial front end of the current models for something new. In addition to the spy shots, we have these computer generated renderings previewing the final design of the stylish roadster.

The next-generation SLK had been expected to make its debut in late 2010, so the 2011 release date moves the car's schedule back a bit - unsurprising given the past year's economic climate. Pricing for the current model starts just under $46,000 in the U.S., and the next model isn't expected to stray far from that mark.