Royal Enfield, the world’s longest-continuously operating motorcycle company, reached back into its history by re-introducing the Interceptor model at the EICMA motorcycle show in Milan, Italy, on November 7.

The new Interceptor, powered by a new 650cc parallel-twin engine, represents a departure from the company’s long-standing reliance on 350cc and 500cc singles, which began with the 1932 Bullet model.

Joining the Interceptor is a new twin-cylinder Continental GT café racer model. While similar in appearance to the single-cylinder Continental GT, the twin version is 95 percent re-engineered, the company says, with improved proportions and a lowered stance. The prototype was displayed with an optional solo seat, though a two-passenger bench seat will be standard on production models.

The new engine answers the call of Enfield loyalists who have long yearned for more mid-range torque and top speed from the traditionally styled bikes. Developed between the company’s engineering facilities in Leicestershire, UK, and Chennai, India, the company took into consideration the needs of its popular markets in both Europe and Asia, while clearly targeting expanded growth globally.

Much of that anticipated growth is pinned on the new models and new twin-cylinder engine.

“The Interceptor was an absolute legend in its day,” Lal said. “It first came around in the ’60s, and it was the pinnacle of British motorcycling, and our history for sure. It was the fun days of motorcycling, things were carefree. 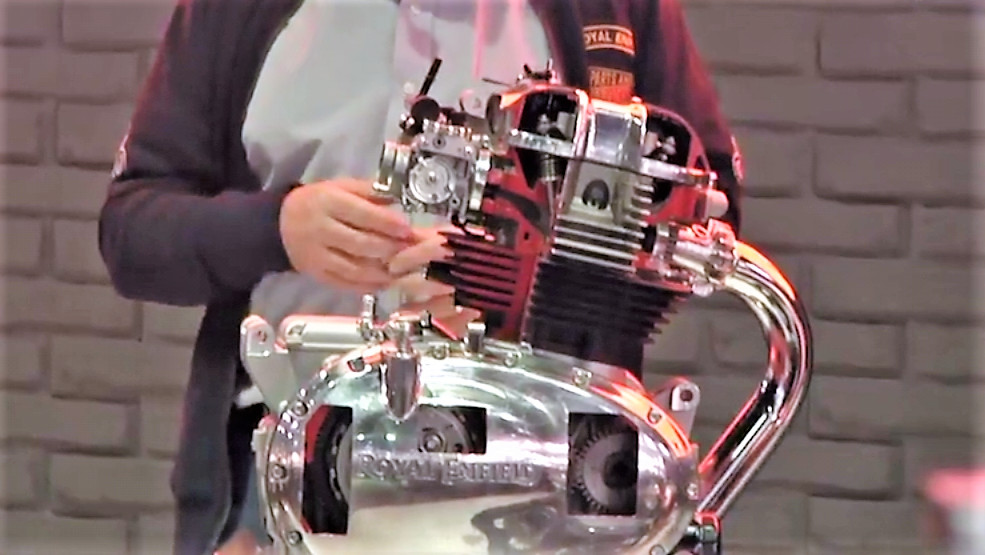 “It was California cool because this is where the bike went,” he added, referring to the original Interceptor’s warm reception amongst American enthusiasts.

“It was very important to us to keep the idea of old-school motorcycling alive,” Lal said. “It needs to be a successor to the (original) Interceptor. What that meant was it must sound gorgeous, it must look the way it does, and it should have the kind of response our customers are looking for.”

Mark Wells, head of product strategy for Royal Enfield, said it was important for the brand to maintain the heritage while designing a motorcycle for today.

“We didn’t want to make a pastiche or a poor copy,” Wells said. “We wanted something that was modern and up-to-date, and usable and accessible for our customers. But we wanted to capture the essence of what was great about those bikes, and what people of my father’s generation thought were fun. That doesn’t change; that universal truth is always the same.”

Price and availability of the new Interceptor and Continental GT are still up in the air, Lal said, but “accessible and very soon.” Launch is expected to be around April 2018, first in Europe and later in the Indian domestic market as production ramps up, with worldwide distribution later in 2018. Final engine specifications have yet to be disclosed.

This article, written by William Hall, was originally published on ClassicCars.com, an editorial partner of Motor Authority.