Audi was the first automaker to create a space in Sony’s PlayStation Home network, and the Ingolstadt-based brand describes it as a “living, breathing Audi AG world featuring Audi AGtv and a calendar of content.”

In the past, that content has included virtual lectures on Audi products, coverages of product launches, VIP events and even interactive mini-games. Now, to marks its third anniversary on the PlayStation Home site, Audi is launching a “Driving Technology Simulation Game” that highlights key features of Audi vehicles.

The simulation focuses on Audi’s quattro all-wheel drive, Audi’s transmission technology and Audi Ultra. Players earn an understanding of each by participating in track-based challenges that require vehicle modification with Audi technology. Mod correctly, and you can rack up virtual gold, silver or bronze medals.

The strategy of branching out to PlayStation Home appears to be successful for Audi. To date, its site has logged some 3 million users, who have played over 15 million games, with each user spending an average of 10 minutes per session on site.

We’re not sure how many vehicle sales that translates into, but it certainly puts the Audi brand in front of a lot of eyes in the all-important 18 - 35 year old demographic. Its strategy of starting with an audience and then working backward to develop relevant content seems to have earned it fans as well. 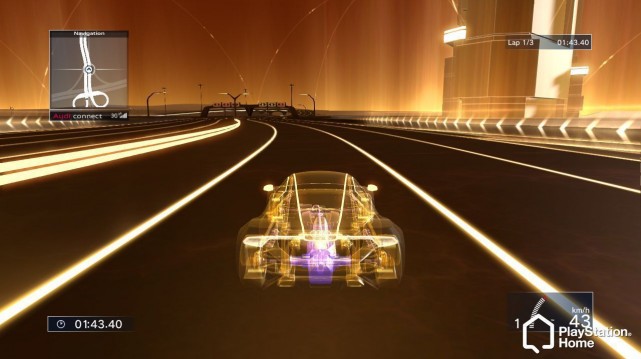 Perhaps the most relevant number is this: since Audi launched its PlayStation Home site, visitors have spent the combined equivalent of 73.5 years playing games created by Audi. In other words, Audi has found a way to get nearly 74 years worth of marketing condensed into just three years, and that’s a solid return by anyone’s measure.