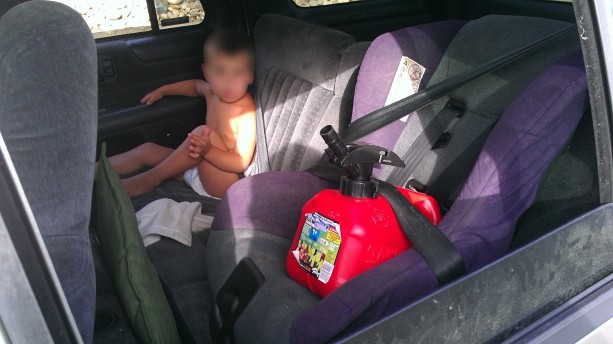 Colorado Department of Transportation: Gas Can In Child Safety Seat

Some things are worth protecting from harm in a car accident. Yourself, obviously. Your cigarettes. Your warm bottle of Mountain Dew? Mos def.

How about a week's worth of gas? The Cable News Network, via affiliate KUSA, reports a Colorado mother (their definition) decided that answer would be yes, and swapped out her small child from the mandatory car seat for the precious can of gasoline.

She then was stopped by police in Aurora, Colo., during a campaign to patrol for seatbelt usage--one of the "Click It Or Ticket" events that regularly nab scofflaws who ignore primary-seatbelt laws.

When police pulled the woman over, they found her infant child, in a diaper, sitting under a lap belt in the back seat with the shoulder belt tucked behind. Next to the can of gas, which was buckled in, semi-safely.

An aghast Colorado Department of Transportation put the photo on its Facebook page, and warned drivers to "please be responsible and make sure children are properly restrained in the appropriate child safety seat."

CNN says the woman was given several tickets, and claimed the child often unlatched his seatbelt--but had no answer when police asked if the child also often buckled gas cans in child safety seats.