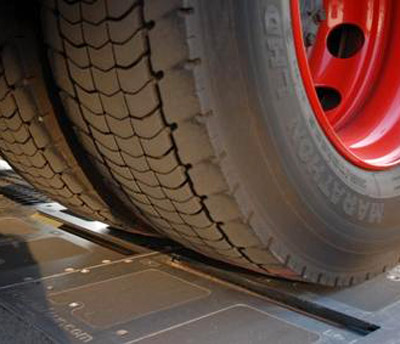 It's no secret that municipalities across the U.S. are strapped for cash, or that many of those places depend on high-tech hardware to put money in the city kitty. But a new camera system making its debut in Great Britain may cross the line by measuring tire treads.

The device is called the ProContour H3-D. Built in Germany, it looks like a small grate in the road, but in fact, that grate is tricked out with sensitive, high-speed cameras to gauge the tread on passing tires. Though motorists won't be ticketed solely because of a reading from the ProContour system, if the cameras determine that the treads on a car's tires are too shallow, the driver will be subject to an inspection at a checkpoint down the road.

As much grousing as we hear about traffic cameras, the public generally supports the use of red light devices. That's to be expected, since red-light intersections pose an obvious safety risk for drivers and pedestrians alike.

Speed cameras are much more divisive, and many states and municipalities have disabled them altogether. In some cases, the technology has proven too expensive to maintain, while in other instances, governments have been threatened with lawsuits over the camera systems' constitutionality. Critics argue that it's not speeding that causes accidents, but rather driving at speeds that don't match those of other cars. (In other words: a car going too slow on a freeway is more of a danger than one going 80 that's matching the speed of other cars.)

Tire tread cameras, on the other hand, seem downright shady. Yes, having low tread is dangerous, but here in the U.S. and elsewhere, tread is typically checked during annual vehicle inspections. Not surprisingly, the Royal Automobile Club and other organizations have come out against the cameras, arguing that they're simply another way for cash-strapped towns to generate revenue without actually improving roadway safety.

Our guess is that these sorts of cameras won't take off. Apart from the constitutionality concern -- which might be an issue -- there's the cost of deployment. To work, these devices have to be embedded in roads, powered from the grid, and, of course, maintained. That's even more of a hassle than speed cams, which sit above ground and can be installed nearly anywhere.

Frankly, we're more concerned about the intrusiveness of auto insurers like Progressive and State Farm. Being occasionally pegged for speeding is one thing, but being habitually monitored for the full range of driving behaviors goes a shade too far.