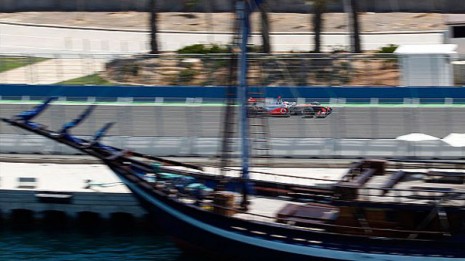 The European Grand Prix in Valencia

This weekend is shaping up to be another thriller for race fans, with three major international events taking place over the next 48 hours. They include the arduous Nurburgring 24 Hours endurance race in Germany, the 12.42-mile Pikes Peak Hill Climb in Colorado and of course, the eighth race of the 2011 Formula 1 season, the European Grand Prix taking place in Valencia, Spain.

The Hermann Tilke designed course runs past the city’s famous harbor and stretches for some 3.4-miles. The current lap record of 1 minute and 37.587 seconds was set by none other than Red Bull Racing’s Sebastian Vettel, which he set at last year’s race.

The Championship leading German youngster will be looking to repeat his success at the European Grand Prix this year, however, a recent rule change may end evening the playing field a little.

None of the cars competing this year will be able to have the settings for their engine mapping changed between qualifying and the actual race. Red Bull is believed to have been using a more aggressive setup during qualifying, which is one the reasons thought to be why we’ve seen the Red Bull duo, Sebastian Vettel and his team mate Mark Webber, at the top of the grid for most of the races this season.

Nevertheless, fresh from his second place position in the previous Formula 1 Canadian Grand Prix, Sebastian Vettel remains in the lead spot in the Drivers’ Championship with 161 points, followed by Jenson Button in second spot with 101 points and Mark Webber in third with 94 points.

Not surprisingly, Red Bull Racing is the clear leader in the Constructors’ Championship, with 255 points, followed by McLaren on 186 points and Ferrari on 101 points.

Stay tuned for our full race coverage this weekend and results report on Monday.