Renault is playing the green card with its new 'Renault eco²’ line of cars, a new labelling system that guarantees any eco² vehicle meets stringent environmental guidelines during the car’s lifetime, from production through to usage and end-of-life disposal. The eco² range meets three main guidelines as set by the ISO, covering carbon-dioxide emissions levels (set at a maximum of 140g/km), reusability (95% reusable components at end of life as seem in the pop-up), and finally the level of recycled plastics used (at least 5%). Vehicles like the Mégane, Trafic, Master and upcoming Twingo will be among the first models to feature under the new initiative. 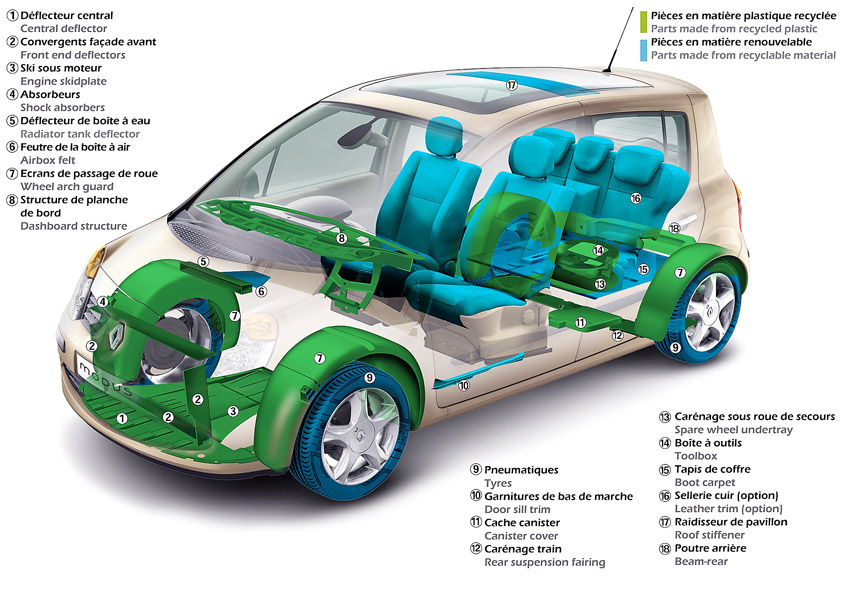 Renault has also made it affordable for buyers to help the environment by keeping the additional cost of implementing the new guidelines low. The key strategy is the utilization of downsized engines and biofuel-driven vehicles. Downsizing conventional petrol and diesel engines continues to stand out as one of the most cost-effective ways of curbing fuel consumption and greenhouse gas emissions. Performance can still be maintained by applying turbocharging or direct injection technology. For example, a 1.9L diesel engine with an output of 93hp has now been replaced by a more fuel-efficient 1.5L turbocharged powerplant delivering 105hp.

Some of the advancements include the use of a multi-blade variable geometry turbocharger, piezoelectric multi-injection and a particulate filter with exhaust post-injection. Renault also considers biofuels as another effective way of controlling CO2 emissions in the medium term. Biofuels are ecologically efficient because they are derived from renewable vegetable matter and also economically efficient because they require limited development costs.

Other avenues being investigated is the implementation of second-generation fuels sourced using the Fischer Tropsch process from natural gas, coal or biomass, as well as further analysis of electric vehicles, hybrids and fuel cells. The eco² line will initially apply to Renault brand vehicles only but will eventually spread to other models within the Renault-Nissan empire.