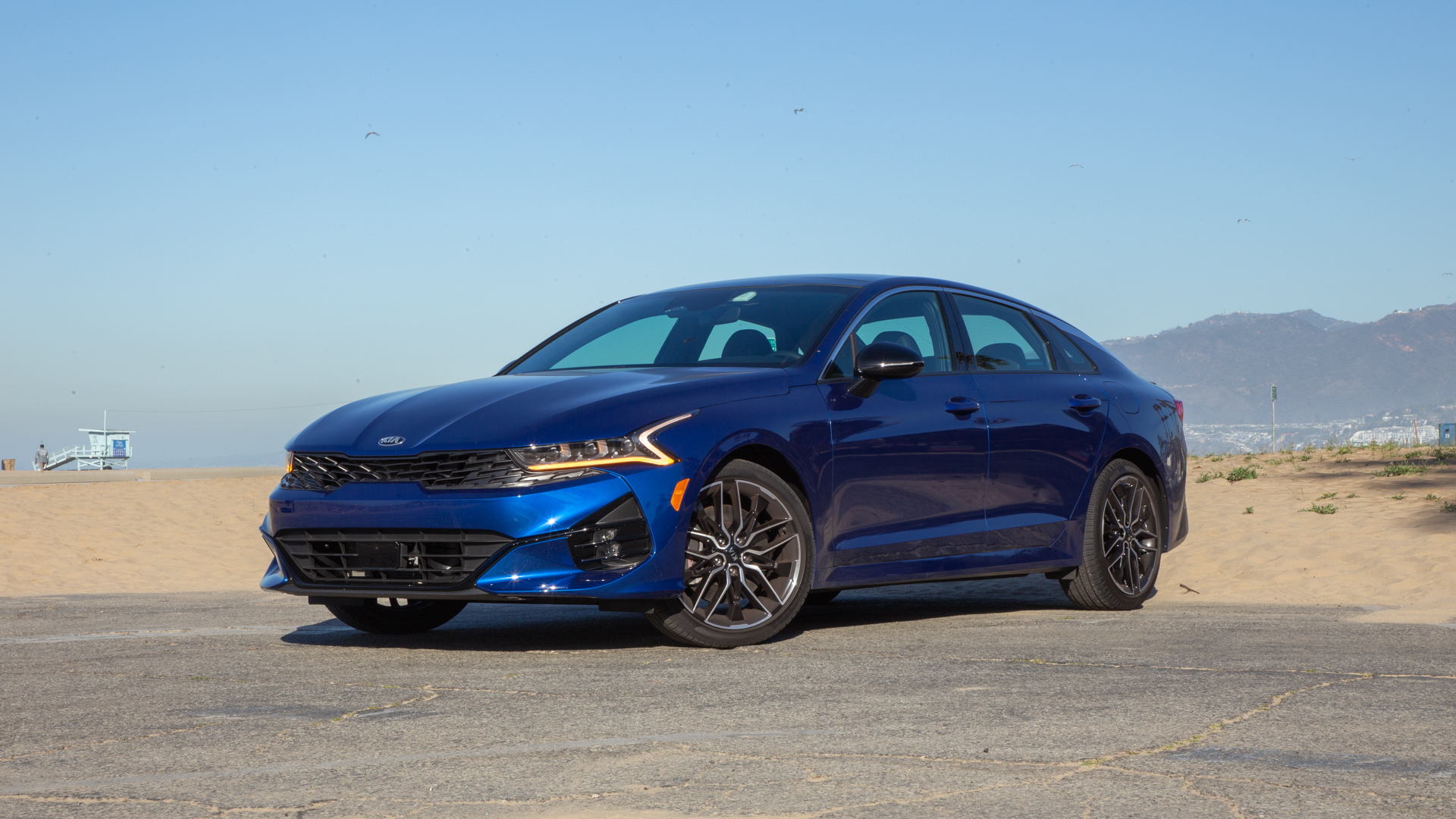 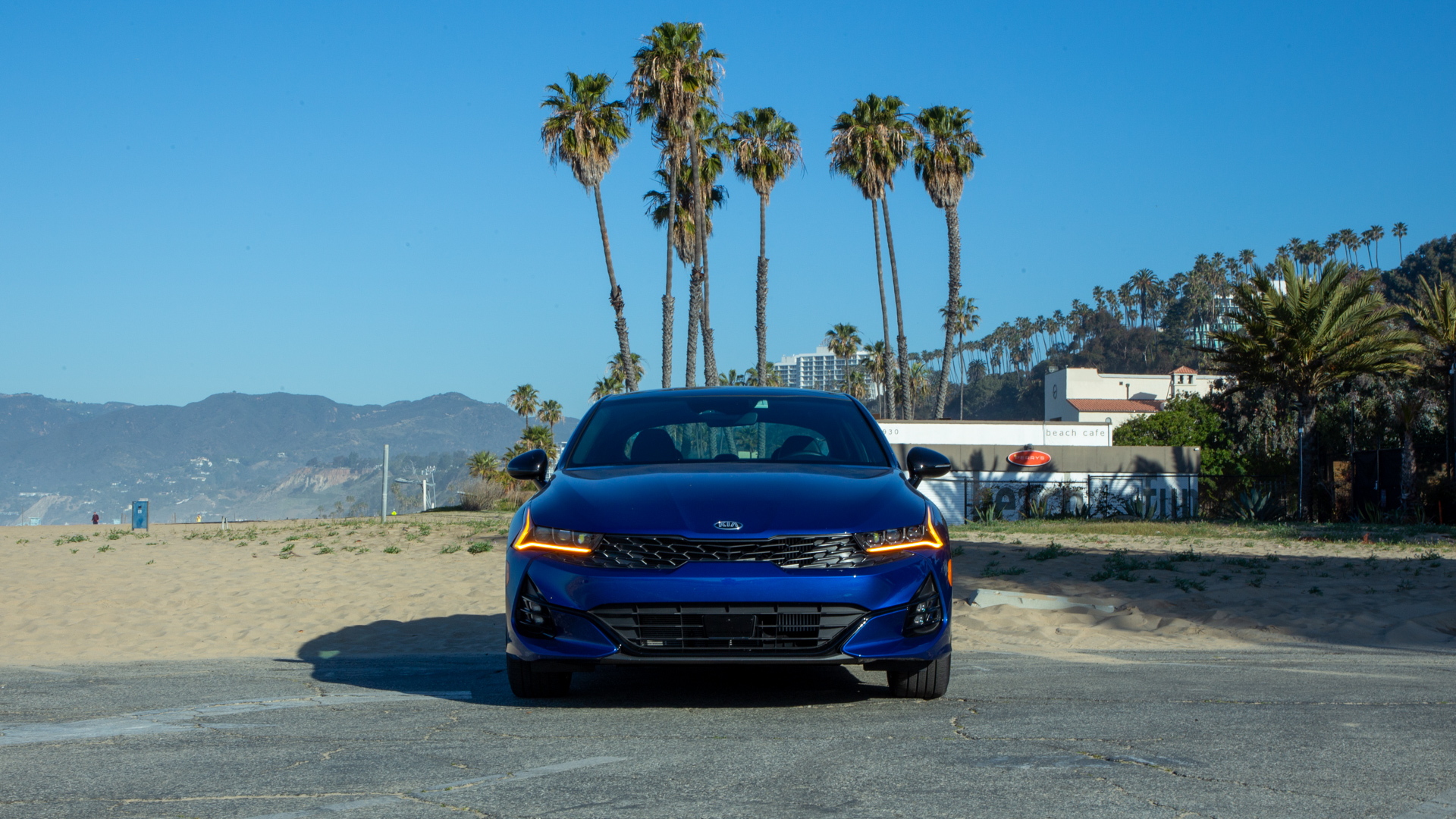 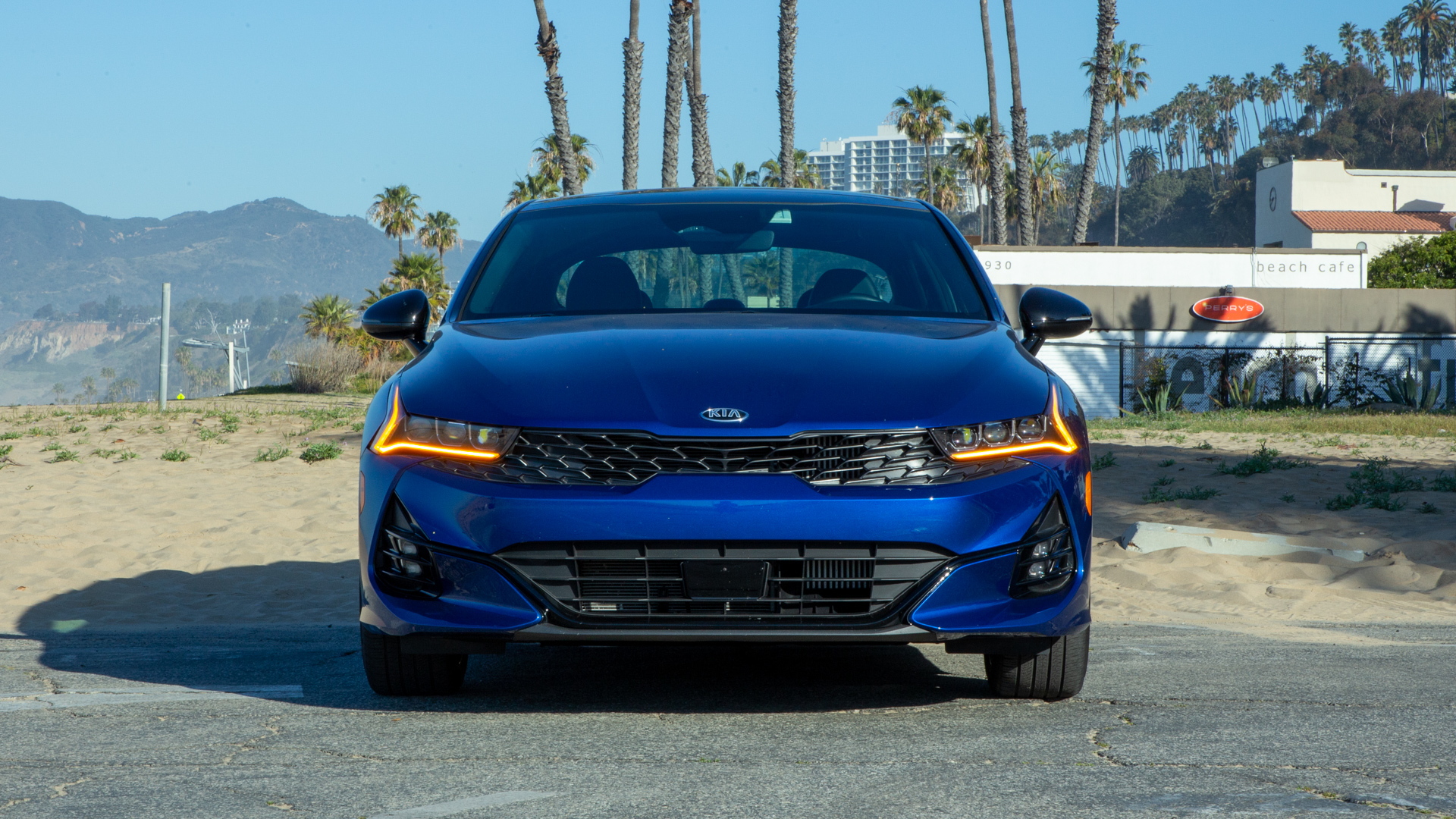 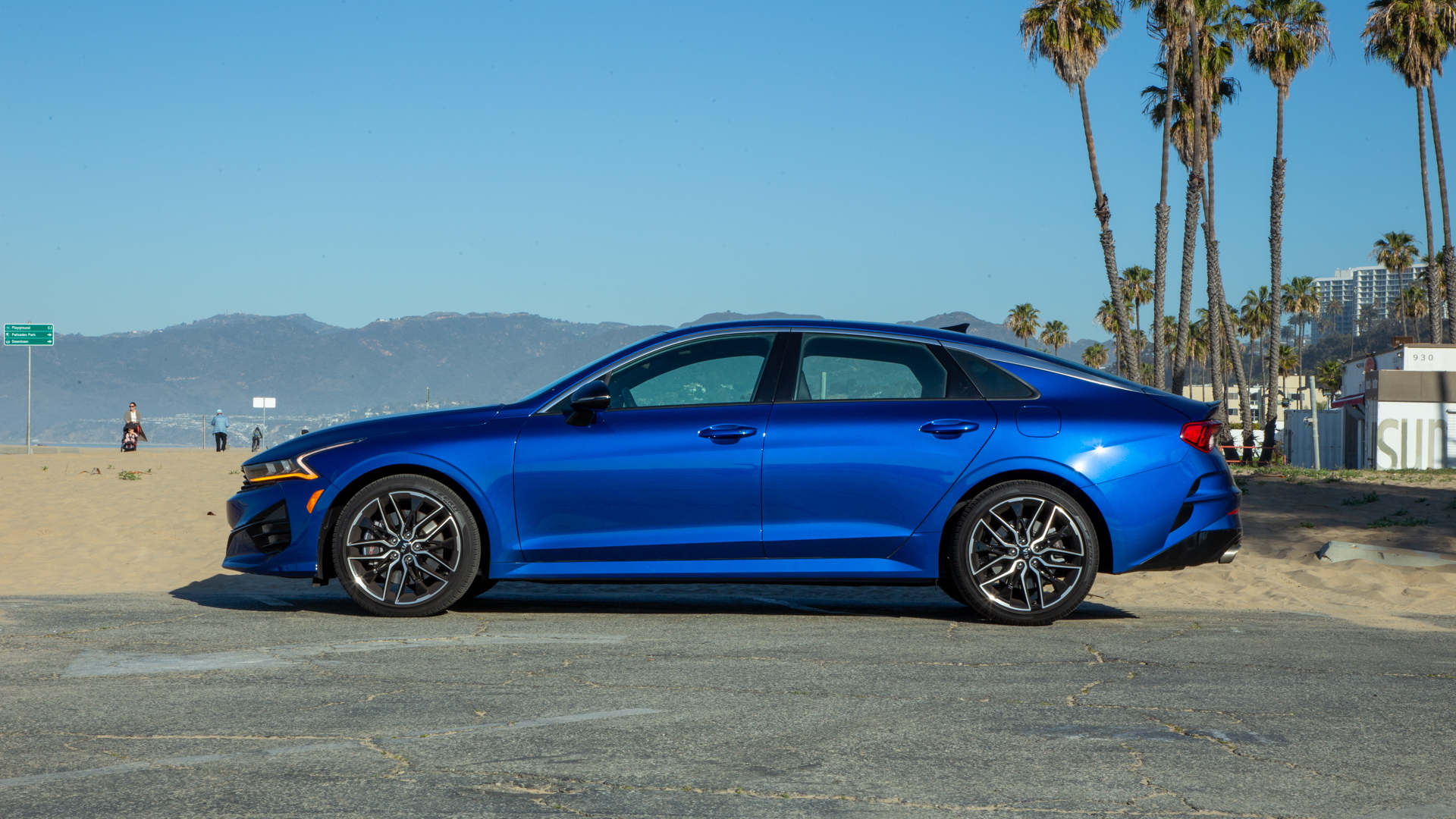 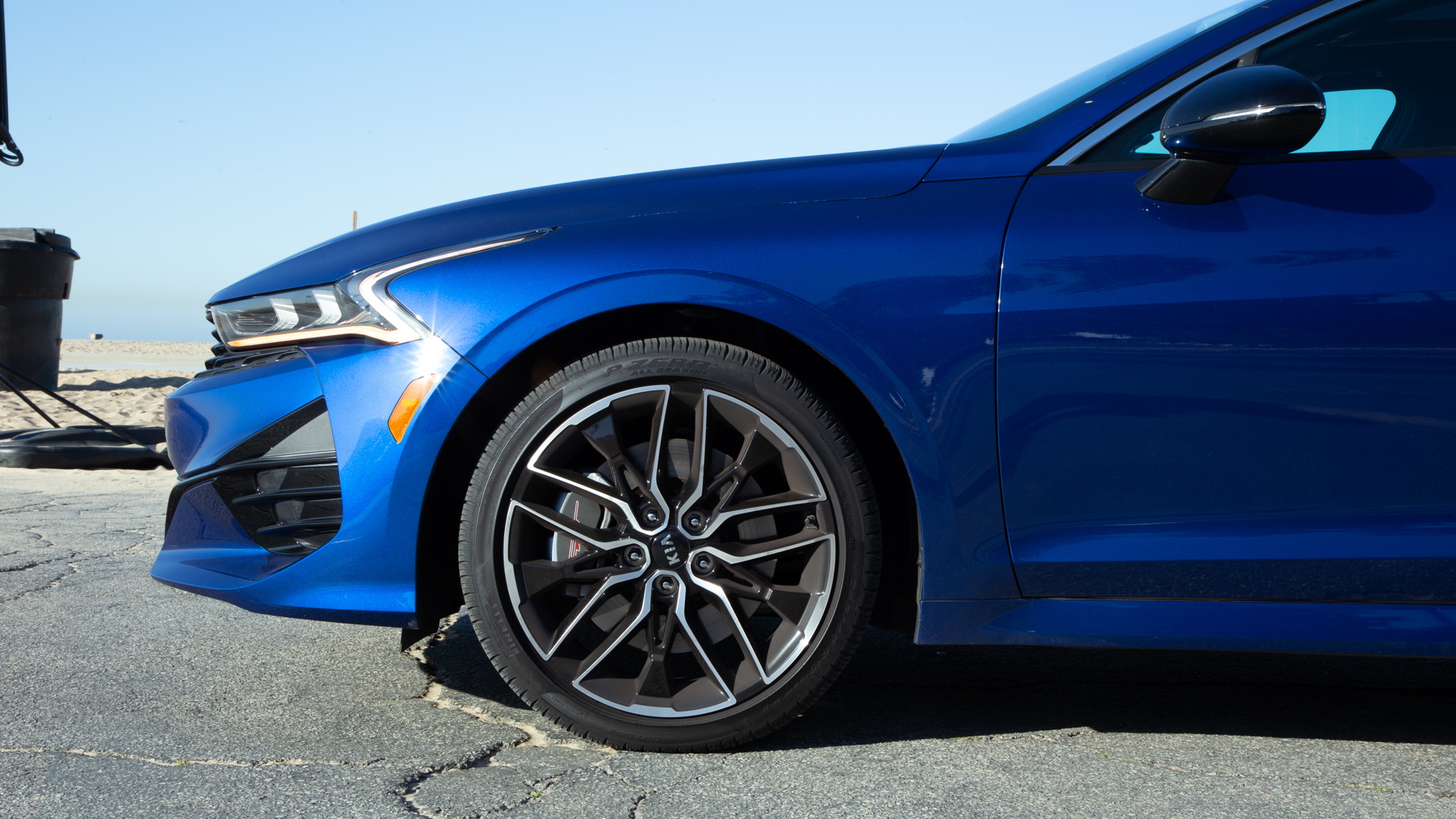 Mainstream mid-size sedans aren’t typically known for being fun. Practical and affordable yes, but it’s rare for cars in this class to place an equal emphasis on drivability. Beyond the defunct Ford Taurus SHO and the Mazdaspeed version of the Mazda 6 which was sold more than a decade ago, I’m hard pressed to think of anything that fits the bill. Suddenly, we have two entries for the 2021 model year and they’re both from Korea.

The 2021 Kia K5 GT an d2021 Hyundai Sonata N-Line seem to be on a quest to make mid-size sedans less boring. These cars are both appealingly rambunctious, which makes sense given how much they have in common.

Hyundai and Kia both love to point out that everything you can see or touch on the vehicles is different between the cars, and that’s true. No body panels are shared, and the interiors look and feel different. But the two share the same platform and use the same powertrain. This makes them more fraternal twins than identical twins, but they’re twins nonetheless.

However, one key difference impacts the driving experience: tires. The Sonata N-Line that I tested previously came with a set of optional 245/40R19 Continental Premium Contact 6 summer tires that provide superior grip in place of all-seasons. However, the K5 GT doesn’t offer such an upgrade, meaning you’re stuck with the provided Pirelli P Zero All-Seasons, which let the car get a little loose.

Under the hood of the K5 GT lies a 290-hp, 2.5-liter turbo-4 that makes 311 lb-ft of torque and works through an 8 dual-wet-clutch automatic. The power is sent to the front wheels, which can easily be overwhelmed by the quick revving engine’s strong output.

Hit the gas aggressively from a stop in any drive mode and the tires start to spin, but the electronics kick in and after a few rotations the K5 GT moves forward rapidly. Engaging the most-aggressive Sport+ driving mode unleashes the most fun. It not only cranks up the throttle response and steering heft, but turns down the stability control to allow more wheel slip—and slip they do.

Pinning the throttle in Sport+ keeps the wheels spinning after the transmission shifts up into second and even into third gears. This is not the fastest way to get the K5 GT off the line—that requires some finesse with your right foot—but damn if it isn’t goofy fun to lay down some fresh tire marks in a family sedan.

Once the tires stop spinning, the K5 GT accelerates quickly. Kia lists a 0-60 mph time of 5.8 seconds, but from the driver’s seat it feels quicker than that. There is no hint of turbo lag. It just pulls hard from a stop and in that crucial 20-40 mph range to really let the sedan rip out of corners.

The summer tires on the Sonata N-Line prevent this kind of wheelspin. They hook up earlier, putting that power down to the pavement. But in this case, less grip just might be more fun.

Same as in the Sonata N Line, the K5 GT has a rack-mounted electric-assist power-steering  system, versus the column mounted setup found in the other K5s. The design offers better feedback and sharper turn-in, both of which are strengths of the K5 GT. The amount of feedback you get with electric-assist power steering and how natural it feels are not easy to program, or more companies would be doing the same.

Like the Sonata N-Line, I was surprised by the K5 GT’s lack of torque steer. It doesn’t have a limited-slip differential like you’ll find in other front-drive performance cars, just a brake-based torque-vectoring system. But somehow, the K5 GT accelerates straight out of turns. Get on the gas too hard or too early and the tires will scramble for grip, but it never yanks the wheel out of your hand or gets the sedan misaligned.

The K5 GT’s conventional suspension is on the firm side. It gets sport-tuned bushings, struts, and shock absorbers. But it still has enough give for the sedan to remain comfortable during a commute. It’s above average at both roles in my estimation: good in the day-to-day and also up for some fun on the weekends. There is some body roll in the corners, though the lean feels controlled and predictable rather than sloppy. Trail brake into a corner and you can get help the  car rotate ever so slightly, which provided great fun during an afternoon on canyon roads.

That sort of silliness you don’t get with the summer tires, the added grip makes the Sonata N Line feel more planted and the nose doesn’t push quite as much when you do get the car to understeer. The summer tires' larger advantage may be in the noise department. The all-seasons audibly protest early and often, something that you don’t get from the summer rubber.

Though the lack of a summer tire means that the K5 GT’s performance potential falls short of the Sonata N-Line, that doesn’t make it any less fun. It’s a car that begs to be driven quickly and in some ways, I preferred the slip at times to the added grip those tires provided. Both vehicles are must-adds to the short lists of those who want a mid-size sedan that isn’t a snoozefest.

The K5 GT I tested was priced at $35,705 (including destination). That’s about the same as the Sonata N Line, and it feels like the right price for this degree of performance. It’s a joy to drive the K5 GT, thanks to its superb handling, solid ride, excellent powertrain, and a little bit of playful slip.

Kia provided a loaner K5 GT for Motor Authority to bring you this first-hand report.