A few weeks ago we told you that Aston Martin was preparing a special hydrogen-powered Rapide that it planned to race at the Nürburgring 24 Hours endurance race this year.

Aston Martin boasts that this will be the first time a race car has used hydrogen in a mainstream motorsport event, and that it will also be the first time that a complete lap will be achieved with zero C02 emissions.

The engine has been modified to run on either gasoline or pure hydrogen fuel or a combination of the two, in similar fashion to BMW’s Hydrogen 7 from 2006. Since the engine can run on multiple fuel sources, the car has been dubbed a “hybrid” by Aston Martin, however, there’s no vehicle electrification here.

In pure hydrogen mode, Aston Martin, together with hydrogen expert Alset Global, aims to show that a CO2 emission free lap of the Nürburgring Nordschleife is possible. This is because the burning of hydrogen with oxygen from the air creates basically water as its only emission.

The system comprises a hydrogen fuel rail, storage tanks and proprietary engine management system. This enables flexibility in the control of the combustion process according to each particular driving situation: either pure hydrogen, gasoline or an arbitrary blend of both can be selected to ensure optimum power, acceleration and CO2 reduction.

Safety is paramount, of course, and the system includes four ultra-high strength carbon fiber tanks holding a total of 7.7 pounds of hydrogen stored at a pressure of just over 5,000 psi--two tanks housed next to the driver and two in the trunk. 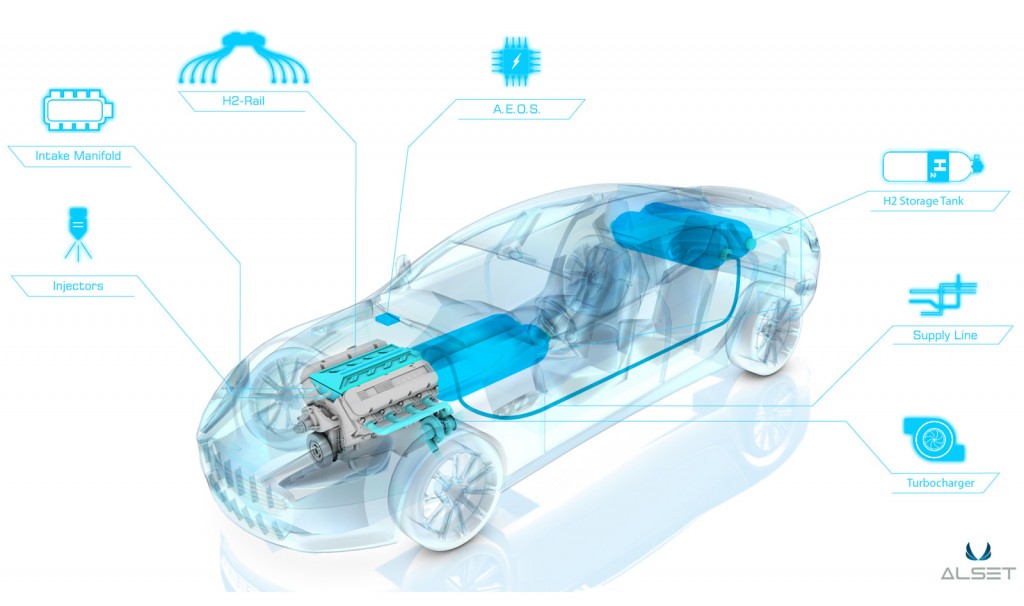 Aston Martin’s participation in the Nürburgring 24 Hours using the Hybrid Hydrogen Rapide S is part of the celebratory events surrounding the automaker’s centenary this year. However, it’s also a chance to prove potential future technology in one of the toughest and most demanding circuits in the world.

This year’s Nürburgring 24 Hours race takes place on the weekend commencing May 19. This will be Aston Martin’s eighth campaign of the grueling event. Details of its other cars entering the race will be announced at a later date.

Note, there’s much more to come in Aston Martin’s 100th year. The automaker is also tipped to unveil a pair of speedsters based on the V-12 Vantage and inspired by the Le Mans-winning DBR1.