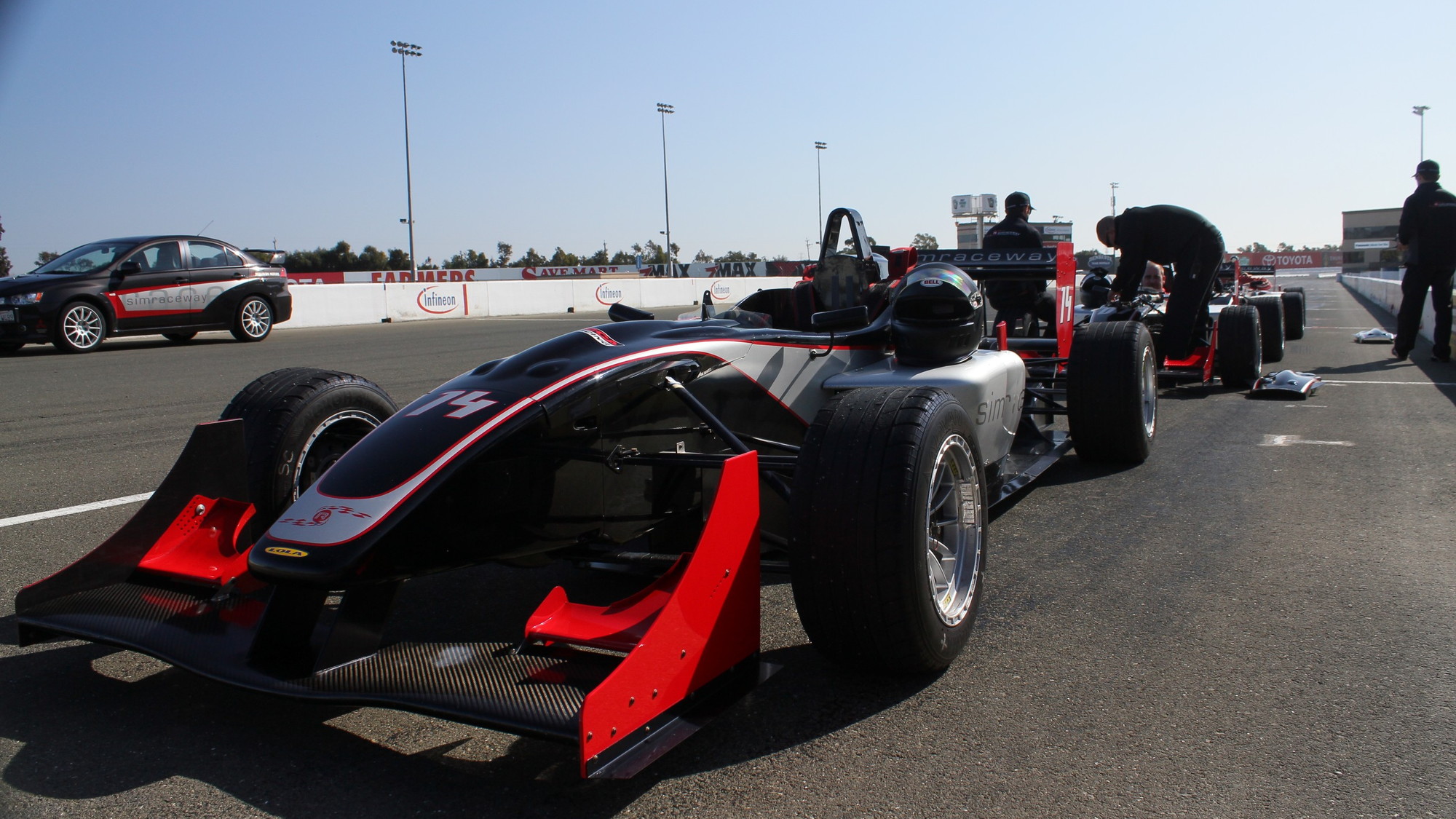 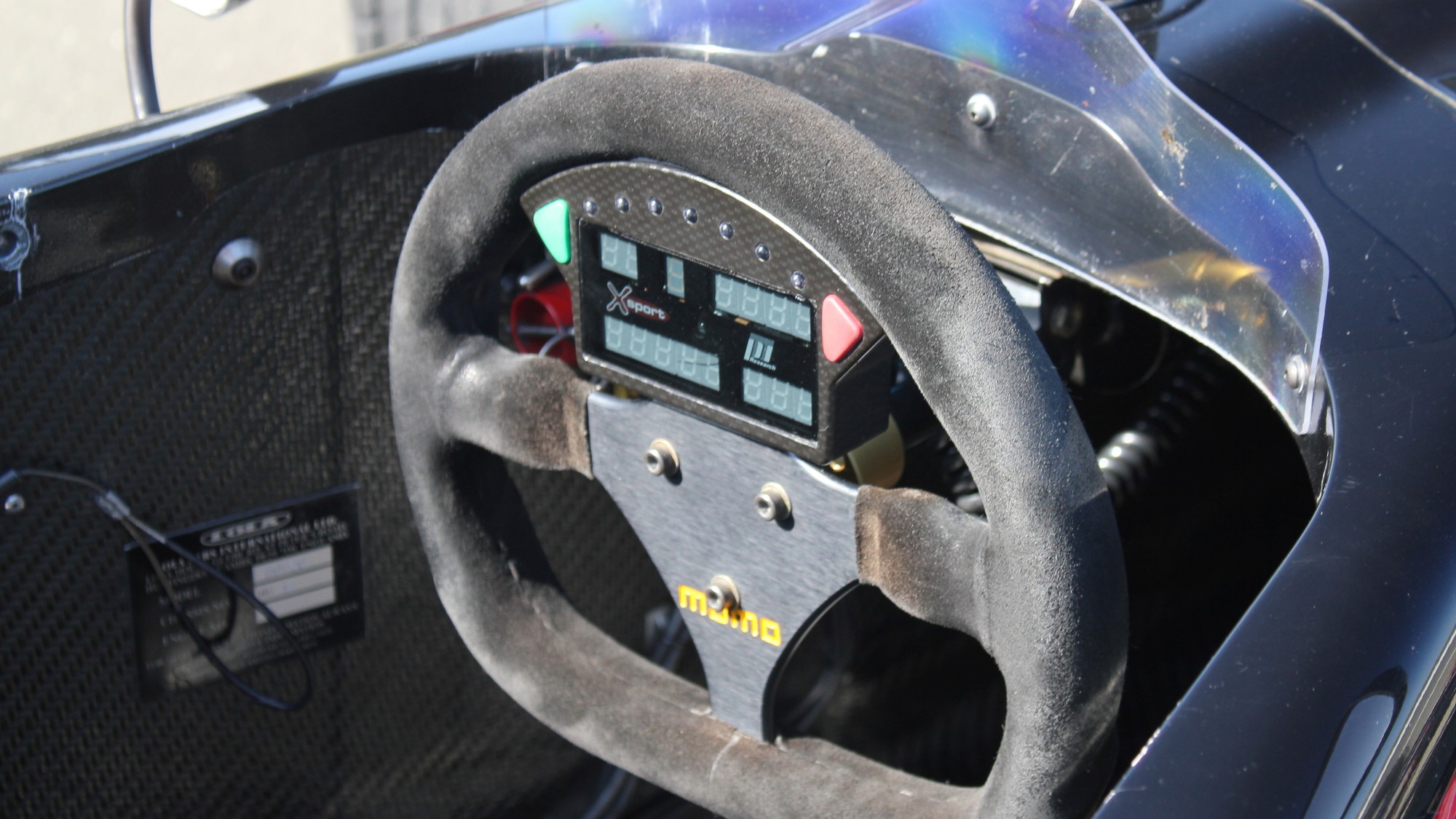 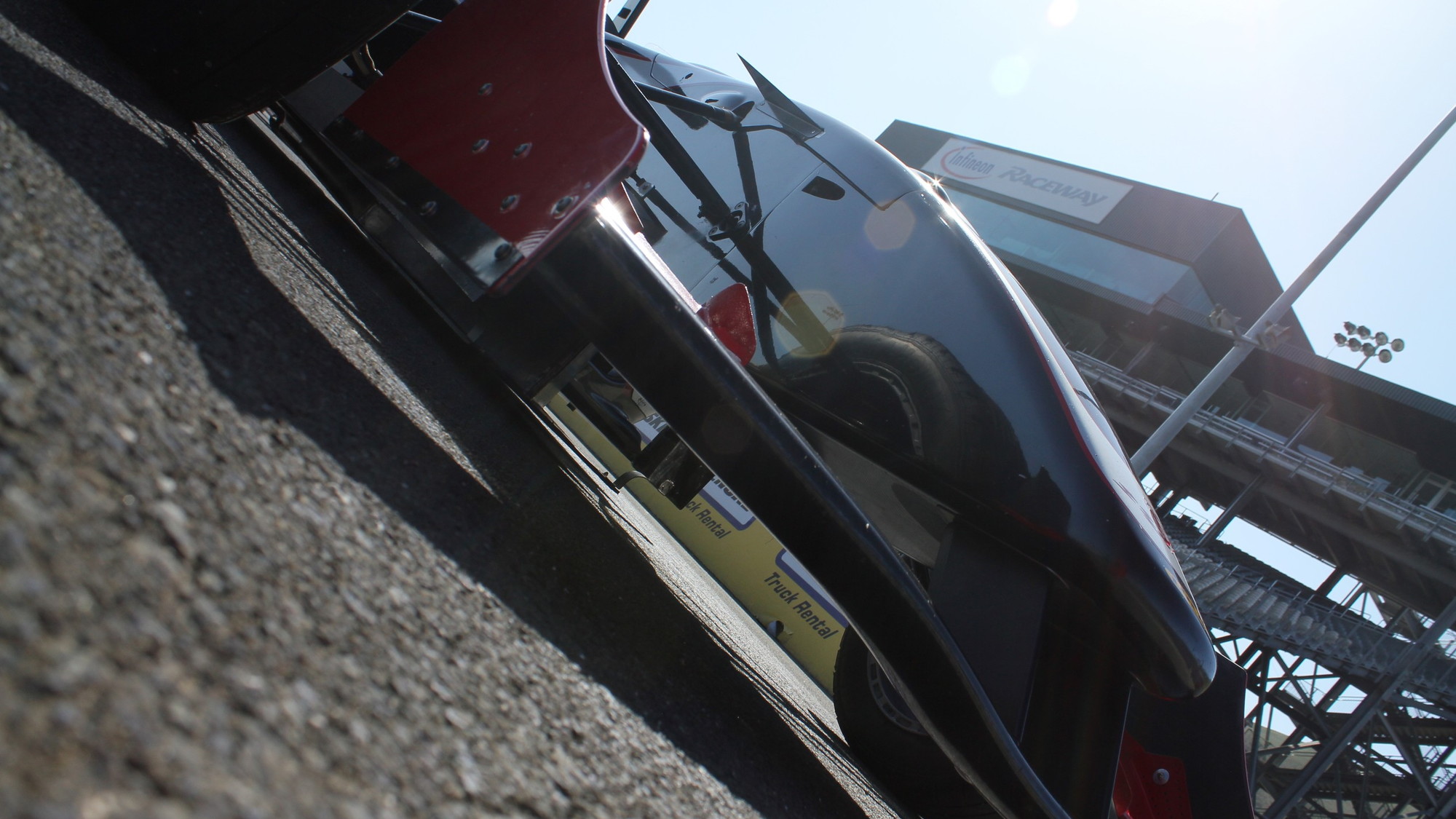 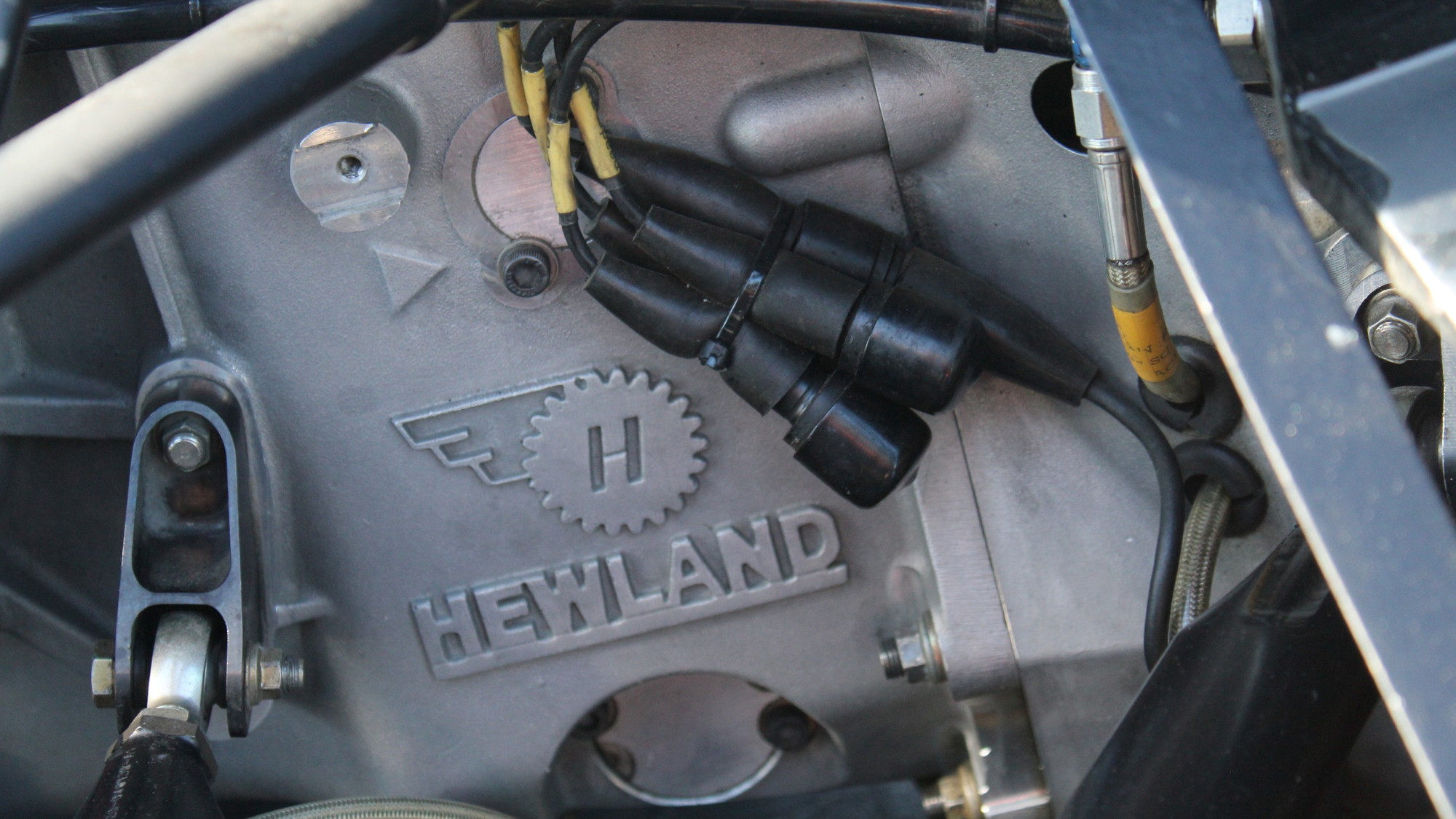 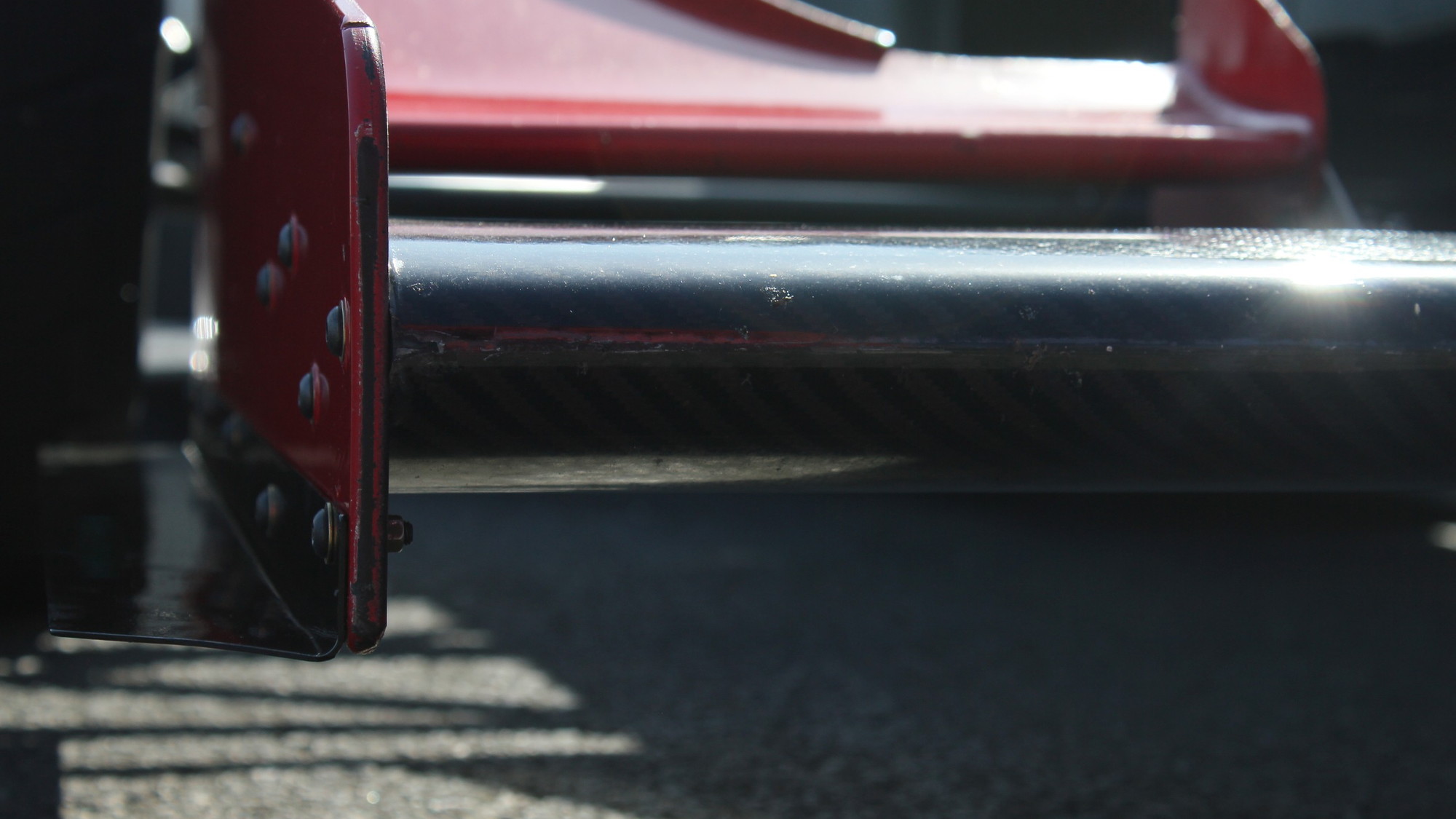 27
photos
If you've never had a car try to rip your head from your neck at 100 mph over nothing but a high-speed turn, you've probably never driven a formula car. If you'd like to, no matter your experience, the Simraceway Performance Driving Center is a great opportunity.

I just spent a couple of days there, at its Infineon Raceway home, experiencing exactly that. Repeatedly.

Disclaimer: Simraceway waived my entry fee so I could bring you this review of the school. I paid the travel, lodging, and food bills.

Simraceway, if you haven't been keeping up with the latest, is the new name and new ownership of what used to be the Infineon chapter of the Jim Russell Driving School. Carrying forward the proven curriculum and most of the same instructors, the Simraceway Performance Driving Center is closely tied with the Simraceway driving simulator--though the simulator wasn't involved in this Stage 1 school.

Who needs simulators when you have the real thing at hand, anyway?

Upon arrival at the school, you'll enjoy a light breakfast and some coffee (or, in my case, lots of coffee), sign away your life and a large chunk of your bank account in the event of an on-track screw-up, and then head over to the classroom for a sit-down session outlining the basics of what's ahead.

After that, you'll get your driving suit and helmet, a few laps around the track in a Mitsubishi Evo X to get a basic idea of the line, followed by your first taste of what it's like in a real formula car. Based on the Lola F3 chassis--but widened to accommodate a larger ranger of drivers--the FJR-50 is a turbocharged Mitsubishi Evo IX-powered, 220-horsepower (in school trim), 1,200-pound piece of rather high-tech, carbon-fiber engineering. Very effective aerodynamics, including front and rear wings, underbody tunneling, and a diffuser help suck the car to the track at speed.

The first drills in the FJR-50 are straightforward, and designed to introduce the driver to the basics of operating the car: starting it from a stop, upshifting, downshifting, and braking. The braking and downshifting drill is, for a first-time formula driver, intense.

With that much power on tap in such a light car, acceleration is very quick, but it's the braking that's really amazing. Once you get the car going quickly enough for the aero to kick in, the initial stopping power is immense, even on the intermediate tires you'll be using for the whole Stage 1 school. Mixing in heel-toe downshifts of the sequential Hewland five-speed dog box introduces some tight and tricky footwork.

You'll quickly learn, through the visual aid of tire smoke and locked wheels, that the massive stopping power under aero load quickly goes away, requiring smooth and progressive release of the brake. Getting all of the available brake while still moving at speed is the trick here, a technique called digressive braking: going to max brake almost instantly upon coming off the gas and gradually releasing pressure on the pedal to match the available braking power as speeds drop.

Despite a great deal of repetition in our three-student/two-instructor class, none of us had mastered the combination at the end of the first session, though we all got the basic idea of it--enough so to continue with our work of getting to know the car--and to get an idea of the neck-stretching in store for us.

Next on the list of activities is a lapping session of Infineon Raceway with the instructors behind the wheel of a pair of Mitsubishi Evo Xs, students riding along. After they explain the track and the basic line, braking markers, and turn-in points, you'll swap seats for a handful of mid-speed laps of your own in the Evo, the instructors critiquing line and other elements of your driving.

This might seem like a step backward, but getting familiar with the track in a more familiar road-car environment helps remove the noise of operating a foreign machine as well as the time-compression factor brought on by the FJR-50's raw speed.

After you've shown you can make 11 turns without running off into an amateur farming excursion, you'll get some ride-along time in a two-seat sports racer on a skid pad to get a feel for how throttle and brake affect front-rear weight transfer, and what that does to line. Hint: adding throttle in a constant-radius turn will reduce front grip and make a larger radius.

Then you'll head back to the classroom for a track talk, and get back behind the wheel of the FJR-50 for some lead-follow laps to wind up the day.

After day one, you'll be tired, overloaded with new information, and likely nursing a stiff neck.

You'll also be pretty satisfied with the experience--the instructors are active professional drivers, capable not just of driving very, very quickly, but of explaining how to do it, and, even better, observing what you're doing and helping you to fix the bad stuff and improve the good stuff.

Day 2: Getting up to speed

Back at the track after a (hopefully) good night's rest, suited up and ready to go, you'll spend some more classroom time on the dynamics of weight transfer, and what driver inputs do to direct a car's traction (or lack thereof) through throttle, brake, and steering inputs.

Then it's back out for another round of braking/downshifting exercises, then a trip to the "kidney bean" drill with the sports racer, where you'll see first hand, again from the passenger and driver's seat, what effect trailbraking and throttle-on oversteer have on a car. This is one of the most pure fun elements of the course, where you can spin the car, throw down smoky powerslides, and generally hoon the car--all with an eye toward learning what to do and what not to do--with impunity.

Next, it's more brake/downshift drills in the FJR-50 to refresh your new muscle memory and evaluate your progression in understanding how to brake digressively before lunch, another track ridealong with the instructors in the Evo Xs, and a classroom session on the etiquette, rules, and technical bits of open lapping.

After a brief lead-follow session, you're let loose on Infineon with nothing but your new-found skills and your own sense of mortality between you and ultimate doom--or a massive sense of accomplishment.

As you work to put together the techniques and skills you've learned over the last day-and-a-half, you'll see continuous, gradual improvements in your speed through each section of the course. The next hurdle, however, is one that can't be taught, and is very hard to learn on your own: just how high the limits of the car really are.

Grip is prodigious. Beastly. Completely outside your ken, even if you're very familiar and experienced with high-performance road-car-based vehicles. But it can go away in an instant if you tell the car to do something it shouldn't be doing. Finding that line, riding the edge, or even approaching it, is the new challenge. Pushing yourself to believe in the car and your skills, to say to yourself, "yes, I can go flat through that whole section," despite every fiber of your inner being telling you to lift, is at the heart of it.

After the first solo lapping session, you'll probably think you've made huge strides--and you probably have. But the instructors will have a notepad full of issues you can work on, improvements you can make, and suggestions for the next session. After the final session, you'll even have a chance to look at some of your data. Each car is outfitted with a full set of data acquisition sensors, and you'll be given a memory stick with your last session and the software to analyze it at home.

Working in these critiques, focusing on keeping line as close to perfect as possible, all while wrestling a vehicle that requires more physical force--and exerts more force upon the driver--than anything you've driven before, can be taxing. It can also be incredibly rewarding.

How rewarding will be determined only by your ability to focus, execute, and, ultimately, work through your combination of disbelief and fear of what the car is truly capable of at speed.

For anyone looking to become a better driver, get behind the wheel of a car with limits that are truly beyond the capabilities (or at least experience) of even relatively seasoned amateurs, or just have a wild one-shot go at living the dream of being a race driver, the Simraceway Performance Driving Center is a safe, fun, and intense experience. What you take away from it will depend on your own goals, but anyone can have a great time.

Once you've completed Stage 1, you can get even more serious about your skills and speed with Stage 2 and Stage 3 classes.

If you pay close attention, you will also learn not just about driving, but about yourself.

For a look at another similar driving school, but from a sports car driving perspective, be sure to check out our review of the Skip Barber Mazdaspeed 3-Day Racing School.