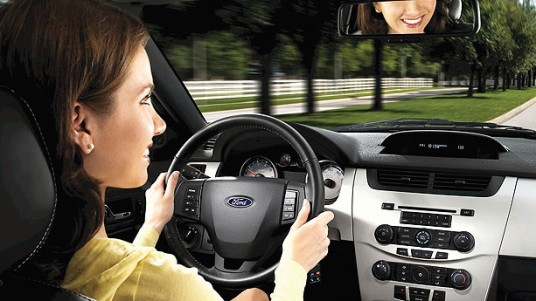 Ford's popular Sync telematics system offers an array of great features, like entertainment, navigation, and diagnostics. Now, the automaker's tech team are wondering if they might extend diagnostics to evaluate the health of drivers themselves.

Developers at Ford have begun working with WellDoc, a start-up that creates health management software. Together, they've built a prototype system that can monitor a driver's health and look out for symptoms that could indicate an oncoming health crisis like a heart attack or seizure.

At the moment, the system is predictive, meaning that it accesses data about the user's health from an online database, then merges that data with other relevant information to predict potential incidents. A write-up in the New York Times gives an example of the system identifying high pollen counts in a particular area and warning the driver of a possible asthma attack.

Down the line, though, we wouldn't be surprised if this technology became less predictive and more of a real-time monitoring system, tied directly to a driver's current physical condition. (That wouldn't be too far a step from today's in-car breathalyzers, which disable automobiles when drivers appear to have high blood alcohol levels.) As the technology matures, there's no reason to think that it won't begin appearing in other forms.

At the moment, Ford says it has no plans to bring this diagnostic technology to market. When and if it does, there will be many, many issues to address -- not least of which will be patient privacy and health records.

But we've all heard stories about drivers who have had heart attacks or seizures while driving. Many of those incidents have resulted in accidents, which have been fatal for drivers, passengers, and occupants of other vehicles. Devices like this prototype from Ford could make the roads a little safer. (Until we all have self-driving cars, of course.)